Aquatic macroinvertebrates—insects and other creatures that live in the stream bottom—feed trout and are the basis of fly-fishing on the Henry’s Fork, but they are also important indicators of aquatic habitat quality. Mayflies, stoneflies, and caddisflies are sensitive to water pollution and habitat degradation, making them so important to the assessment of water and habitat quality that it has its own acronym among aquatic ecologies – EPT; for the three taxonomic orders Ephemeroptera (mayflies), Plecoptera (stoneflies), and Trichoptera (caddisflies). Higher relative abundance of EPT taxa indicates better water and aquatic habitat quality.

Here are five of the most critical things HFF has learned about macroinvertebrates on the Henry’s Fork.

1.  Unfortunately, HFF does not have the needed historic data to compare how individual species have changed across long periods of time. We can only assess the data we have collected from 2015-2018 (2019 data is being analyzed as we speak) and trends across those years.

2.  In general, we know that overall health and percentages of mayflies, caddisflies, and stoneflies (%EPT) on the Henry’s Fork is good. 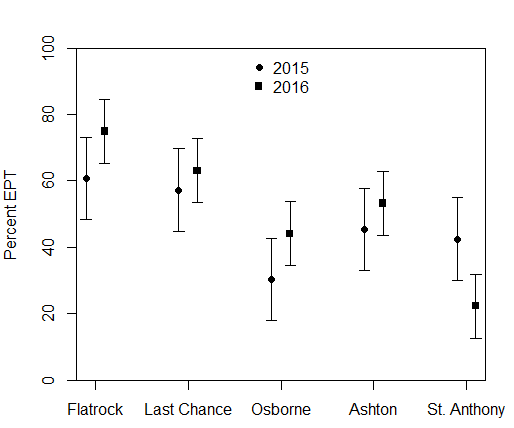 Percent mayflies, stoneflies, and caddisflies at five sites on the Henry’s Fork in March 2015 and March 2016. Points show the average over all samples taken in the particular year at the particular site. The bars are called “comparison intervals” and depict statistical comparison across sites and years. Bars that overlap indicate no statistical difference at 95% statistical confidence. Bars that do no overlap indicate difference at 95% confidence.

3.  Overall health of the aquatic ecosystem decreases systematically with distance downstream of Flatrock, reflecting the spatial trends apparent in the previous two graphs. We expect the most pristine conditions at the headwaters and the most degraded conditions at St. Anthony.

4. For 2015 and 2016 data, abundance of macroinvertebrates was high in the Henry’s Fork, averaging 47,000 individuals per square meter across all sites in both years. The percentage of these individuals belonging to the EPT taxa averaged 50% across sites and years, meaning that a typical square meter of stream bottom on the Henry’s Fork is home to around 23,500 individual mayflies, stoneflies, and caddisflies. Our quantitative data corroborate what anglers have known for decades—the Henry’s Fork is a unique trout stream because it is home to very large numbers of mayflies, stoneflies, and caddisflies. 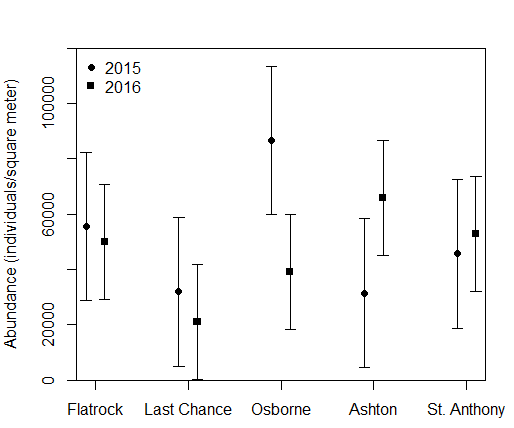 Abundance of invertebrates at five sites on the Henry’s Fork in March 2015 and March 2016. Points show the average over all samples taken in the particular year at the particular site.

5.  The adult stage of all aquatic insects is very brief compared to the aquatic stage—a few hours to days on land compared with months to years on the stream bottom. As a result, effective sampling of aquatic macroinvertebrates and use of macroinvertebrate measures to tell us about habitat quality relies on sampling the invertebrates while they are in the river—not in the air. That is, aquatic insects are sampled as nymphs or larvae, not as adults. Therefore, the analysis of aquatic macroinvertebrates does NOT tell us anything about a particular hatch of adult insects from a fishing standpoint, especially on any particular day or location in the river. In general, the fishing-related aspects of adult insect hatches are only very loosely related to abundance of the aquatic (nymph) stages and depend on a lot of other factors such as weather, streamflow, fish behavior, and water clarity.