Streamflow in Fall River and Teton River remains above average and has been receding only very slowly over the past few weeks. In fact, flow in both streams increased late last week in response to afternoon and evening rain showers. Meanwhile, streamflow in the upper Henry’s Fork is below average because of low inputs from the Yellowstone Plateau groundwater springs. Total watershed input between Henry’s Lake and Ashton over the past two weeks has averaged 1,245 cfs, which is 91% of the 87-year average of 1,367 cfs.  However, the springs are starting to respond positively to this year’s above-average precipitation. Last year over the same time period, watershed input was 1,183 cfs, only 87% of the long-term average. So, the upper Henry’s Fork is showing signs of slowly digging out from the extended drought. However, average or better precipitation during the upcoming fall and winter will be required to continue this positive trend. Flow in all three rivers is right at the long-term average and falling slowly, as see in the following graph. 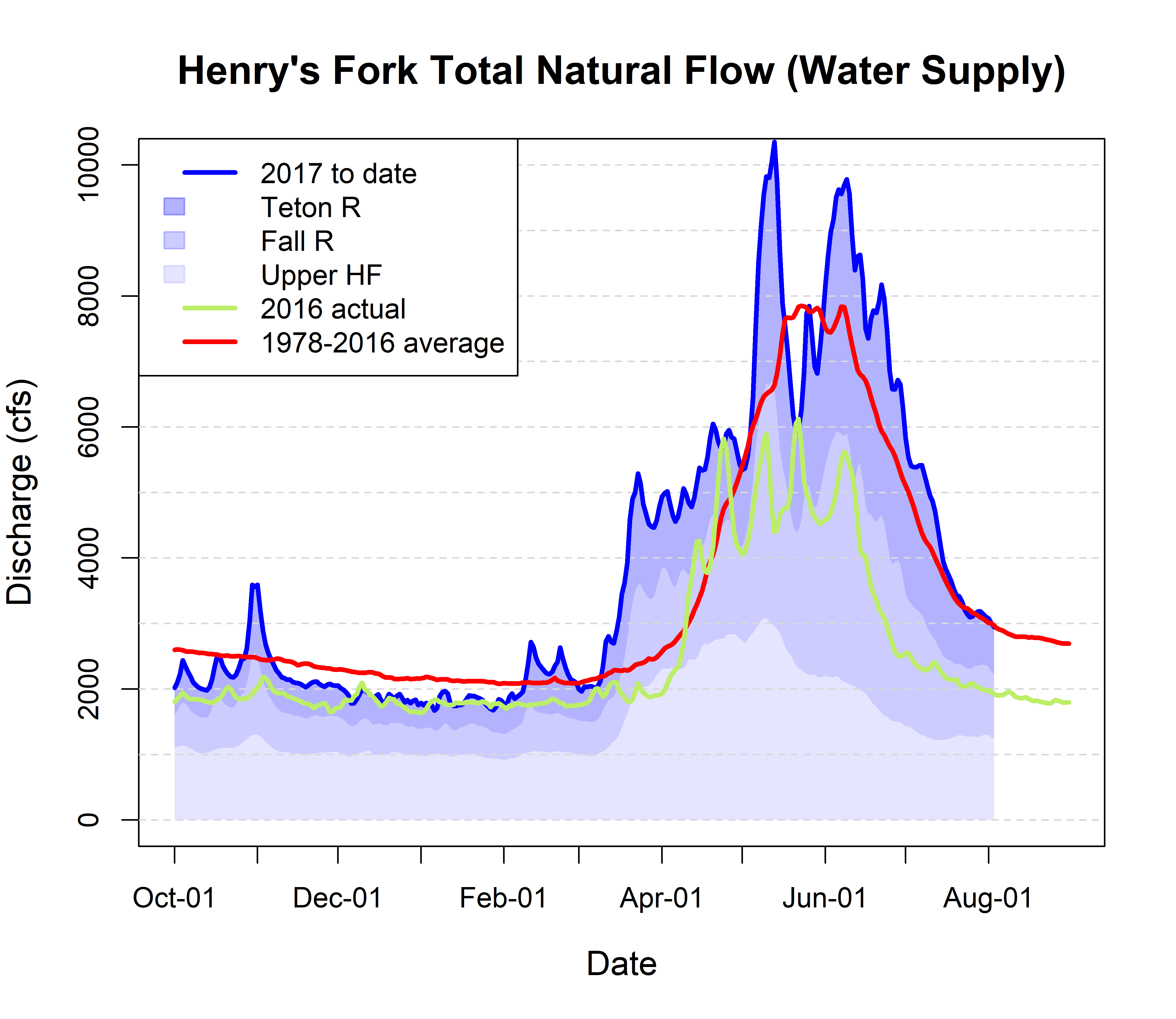 Watershed-total irrigation diversion has dropped nearly 1,000 cfs from its peak back in early July. Diversion is a little over 2,500 cfs and has been fairly constant over the past week. This is a little below the long-term average and quite a bit above diversion at this time last year, as see in the following graph. Diversion will most likely continue to track at or just below the long-term average for the next few weeks. 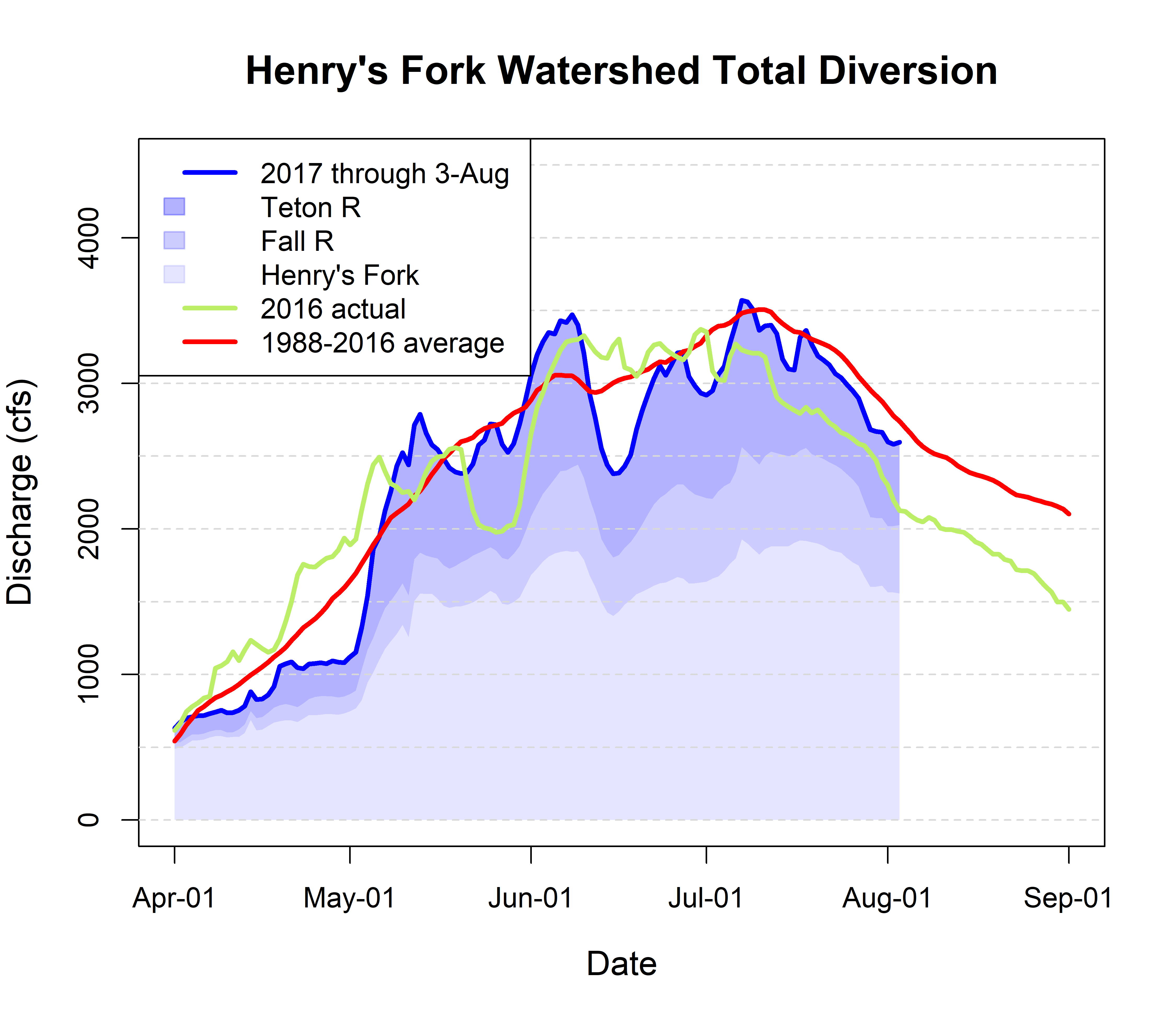 Because of average- to above-average supply and average to below-average demand, need for delivery of reservoir storage water has been minimal this summer. Storage delivery of 50 cfs from Grassy Lake began on July 18 and will continue for another few weeks. Delivery of storage from Island Park Reservoir began on July 15 and outflow from Island Park Dam reached its maximum on 1,080 cfs on July 23. Since then, two reductions have dropped outflow to its current value of 640 cfs, as can be seen in the next graph. 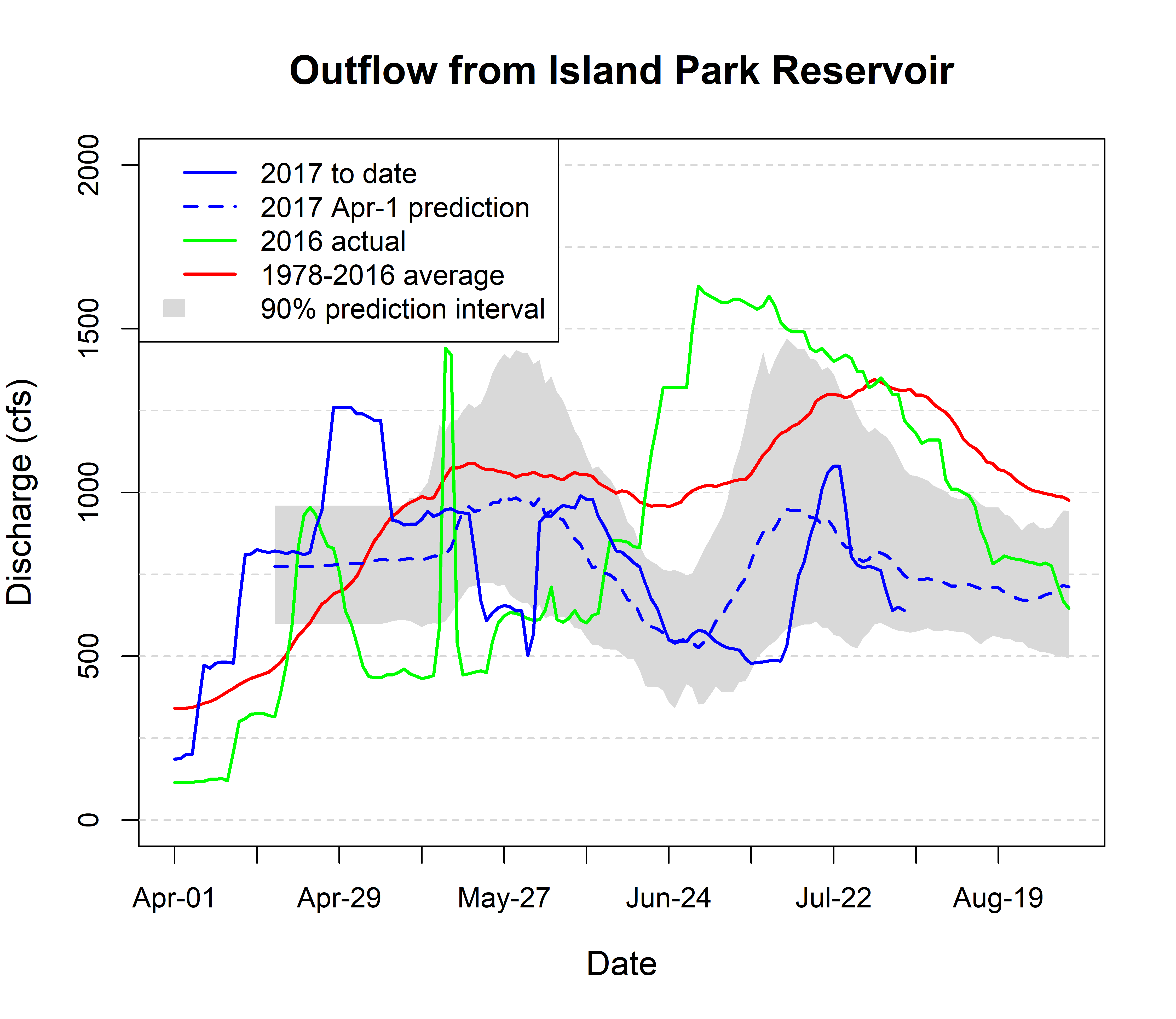 Since July 15, only 13,119 acre-feet of water has been delivered from Island Park Reservoir, leaving the reservoir 90% full, compared with 33% full on this date last year. Long-term average for the date is 68% full. The reservoir is dropping at a very modest 300 af/day, very close to the rate predicted by my April-1 model. However, need for storage delivery started about three weeks later than predicted, so total draft of the reservoir to date is less than predicted, as can be seen in the figure below. 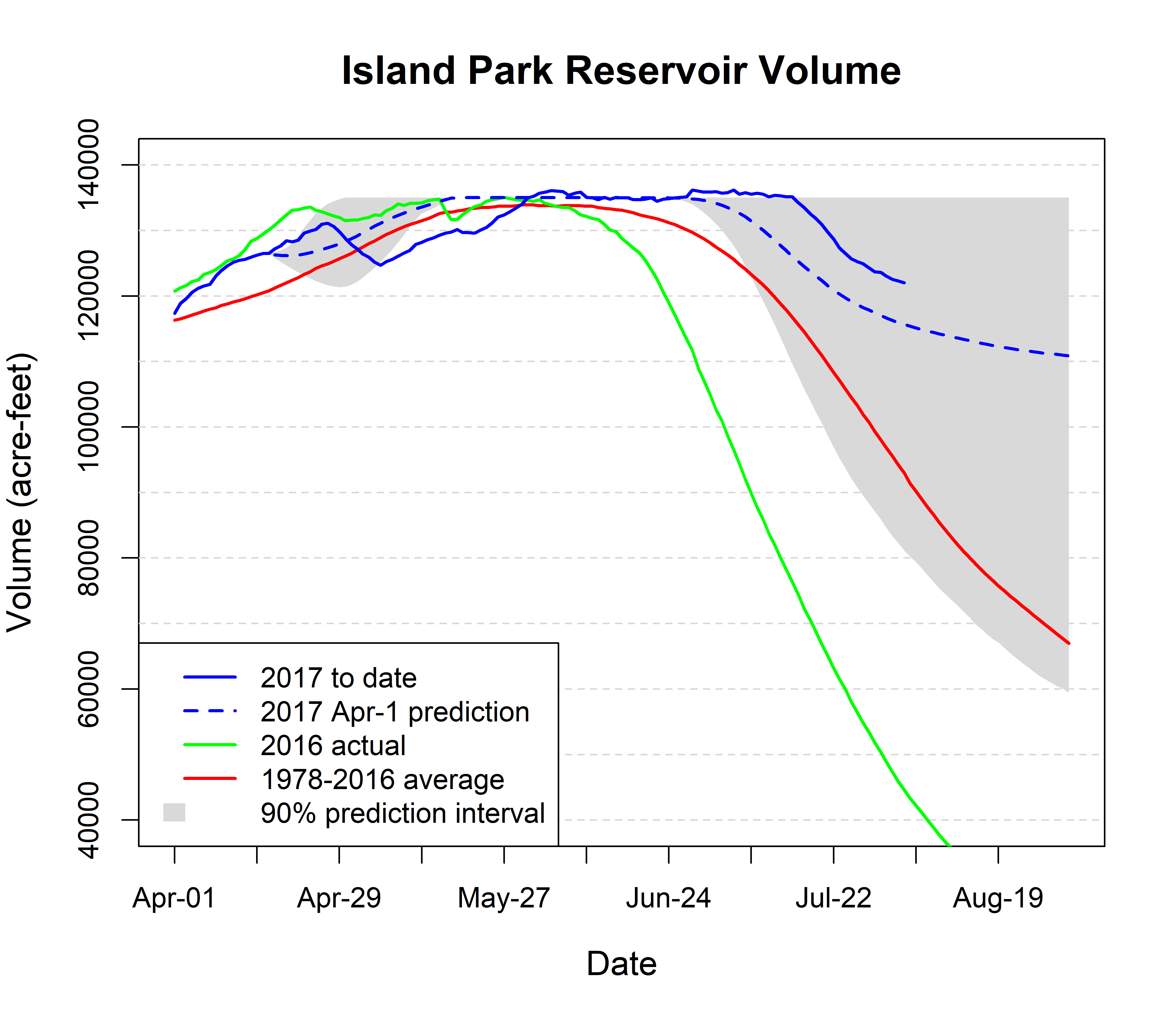 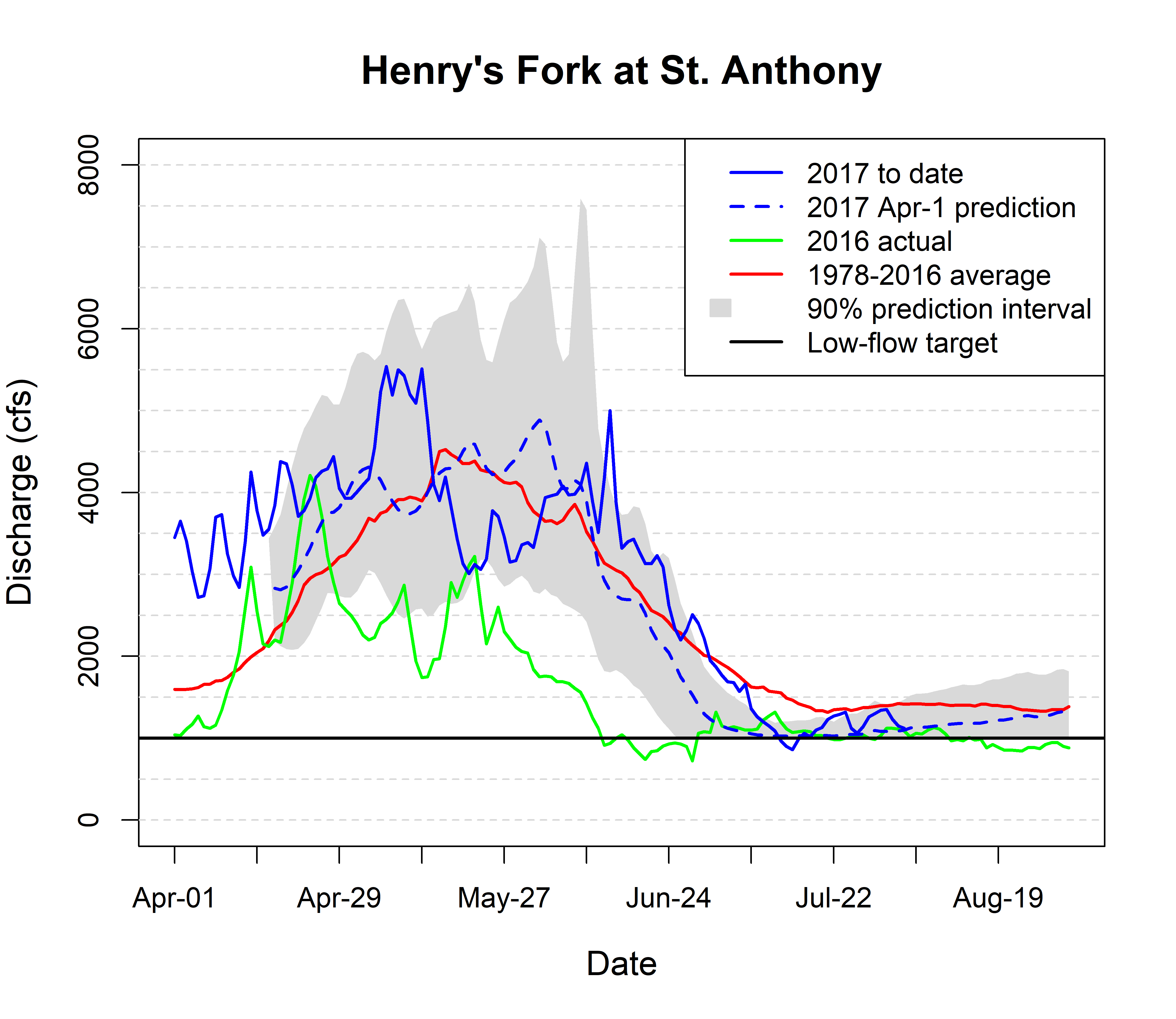 Across the entire upper Snake River basin, natural flow is meeting over 70% of irrigation demand, and diversion is falling faster than natural flow. Water-right priorities remain very good at 10/11/1900 upstream of the Henry’s Fork-South Fork confluence and 3/26/1903 downstream. As a result, very little storage is being delivered from Jackson Lake and Palisades Reservoir. The system-wide management objective right now is to deliver the minimum amount of water possible out of the upper reservoirs in the system—including Island Park—and allow American Falls Reservoir to drop. The flow target for this type of operation is 2,000 cfs in the Snake River at Blackfoot. To put that in perspective, streamflow in the Henry’s Fork at Rexburg—below all diversions and return flows—is 1,100 cfs.

Cooler and wetter weather is forecast for next week, continuing our summer-long pattern of 7-10 days of hot dry weather, following by 7-10 days of cooler, wetter weather. Streams throughout the watershed have responded very well to even the most localized rain showers this summer, so I anticipate some small increase in natural flow next week. In combination with decreased diversion, the need for storage delivery will get even smaller next week. In any case, outflow from Island Park Dam will remain near its current value for the next few weeks, with small adjustments possible in either direction. Any reductions will put outflow very close to inflow and keep the reservoir fairly close to its current level. System-wide storage delivery will follow the same pattern. In particular, Jackson Lake and Palisades Reservoir will remain very near full throughout the whole summer.