Streamflow Still Above Average on Fall and Teton Rivers

Current natural streamflow is 1,044 cfs in Teton River above the Crosscut Canal, 1,109 cfs in Fall River, and 1,267 cfs in the upper Henry’s Fork. Natural flow is above average in both Fall River and Teton River, reflecting above-average precipitation for the water year. However, natural flow is only 83% of average in the upper Henry’s Fork subwatershed, reflecting slightly lower water-year precipitation there, as well as the cumulative effect of four years of drought on the deep Yellowstone Plateau aquifers that feed Big Springs, Buffalo River, Warm River, and other streams. The graph below shows that total watershed supply is right on average for the date, at around 3,400 cfs. 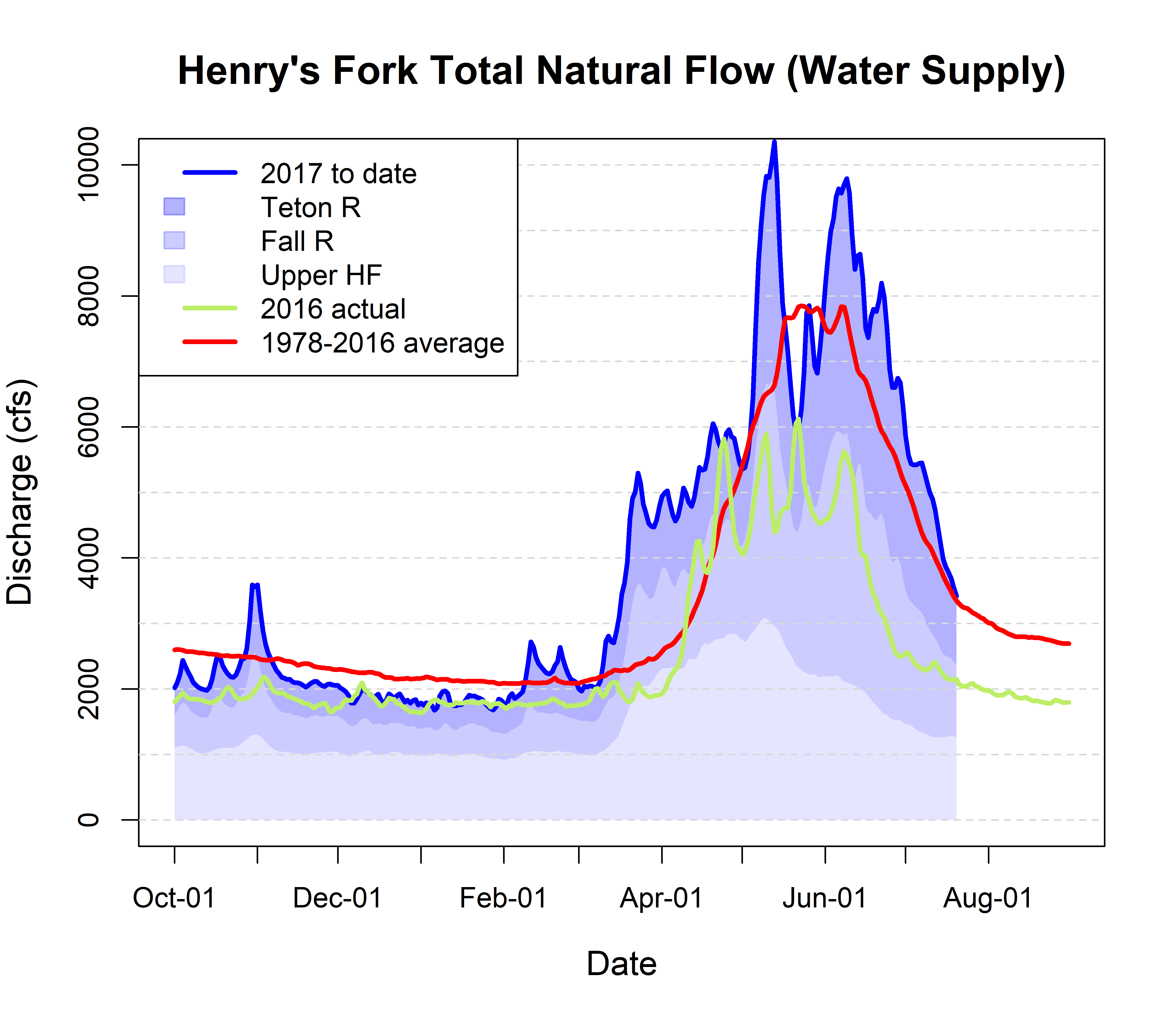 Variability in total watershed diversion has been driven by precipitation this spring and summer and is currently right at average for this time of year, around 3,300 cfs. Diversion was quite a bit lower by this time last year due somewhat to earlier planting but due mostly to lack of physical streamflow. All of the natural flow in both Teton River and Fall River was being diverted at this time last year, and the remaining demand was being met by high delivery of storage water from Island Park Reservoir. The graph below shows total watershed diversion, compared with long-term average and with last year. 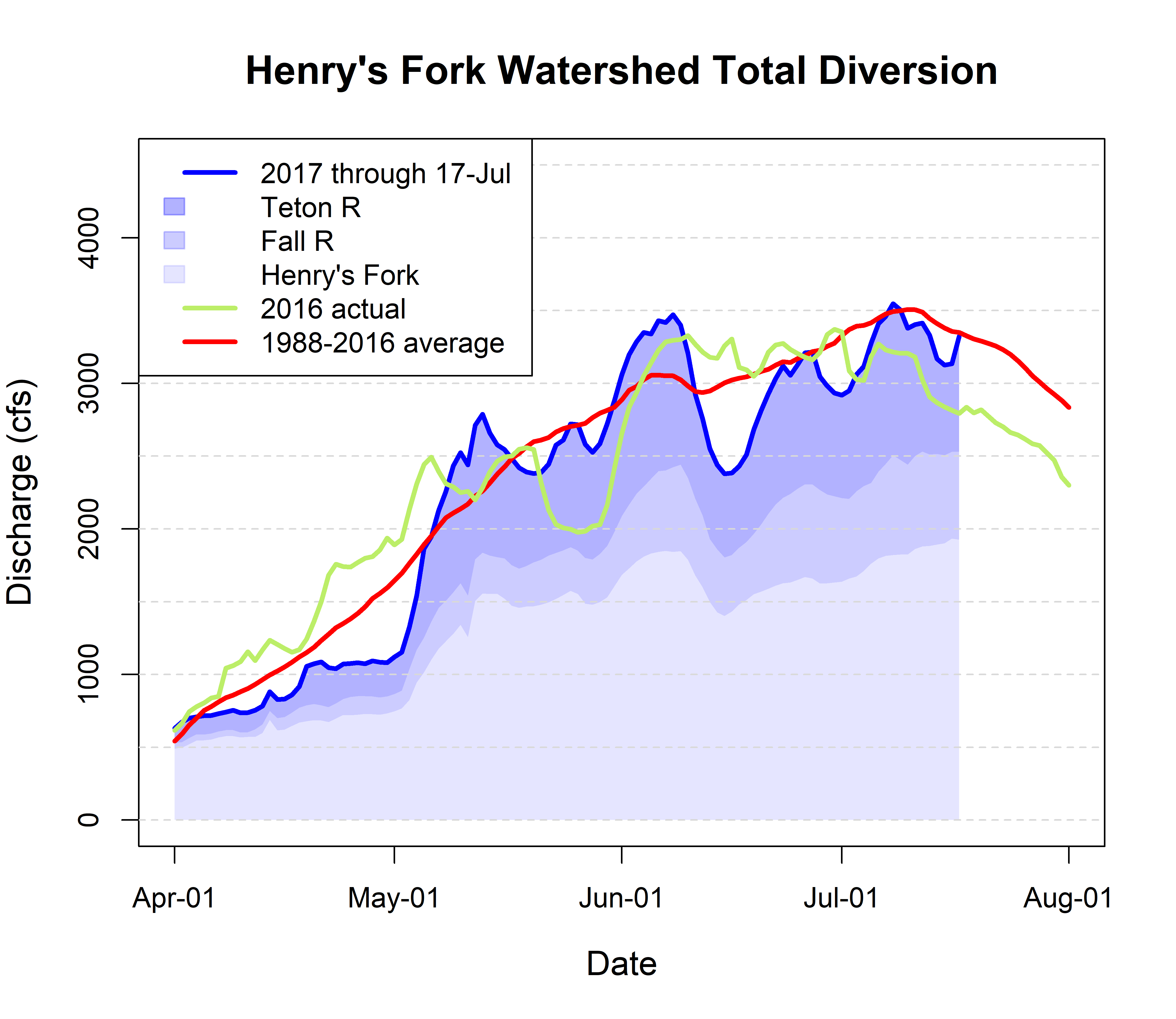 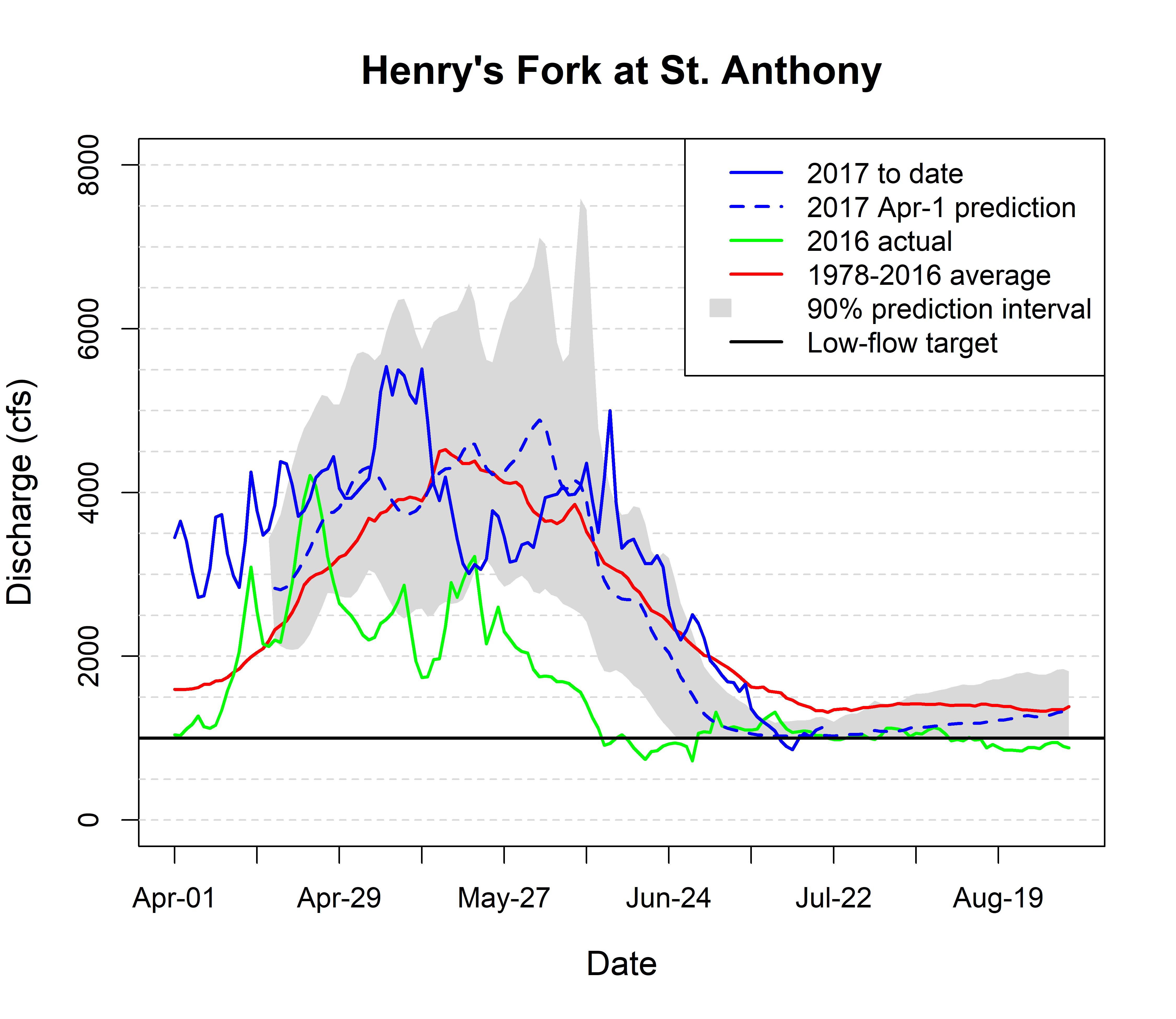 The graph below shows that Island Park Reservoir remained full from June 1 through July 15 and has dropped only a few percent since then. Last year at this time, the reservoir was already less than 50% full. 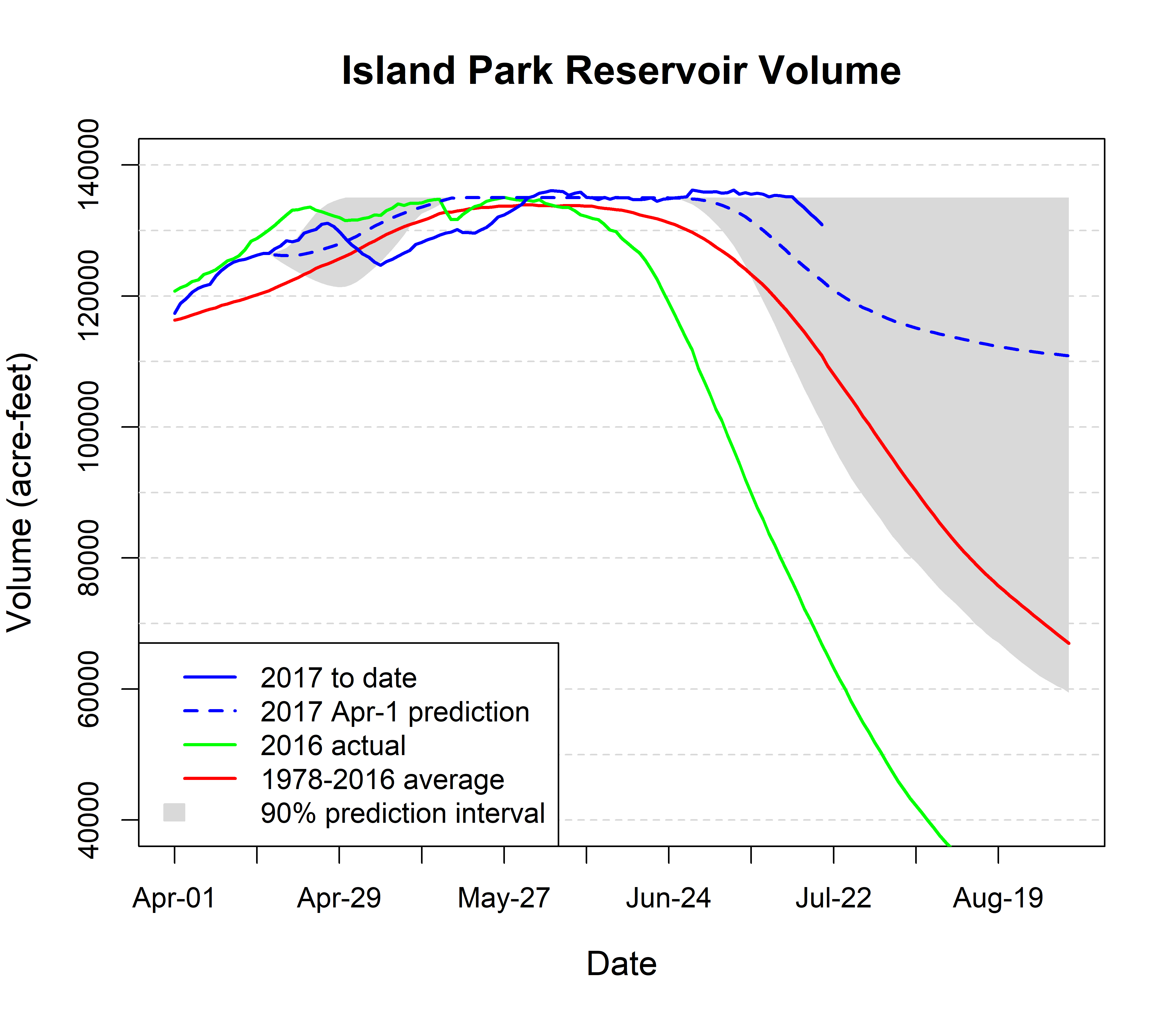 As can be seen in the following graph, Island Park outflow followed the pattern of natural inflow during the time that the reservoir remained full but has since been increased to meet irrigation demand. Current outflow is 1,060 cfs, compared with the long-term average of 1,300 cfs for the date and last year’s value of 1,420 cfs. The April-1 model has done well in predicting magnitude of outflow, but timing of storage delivery was delayed by almost three weeks because of higher-than expected natural flow in Fall River and Teton River through late June and early July. 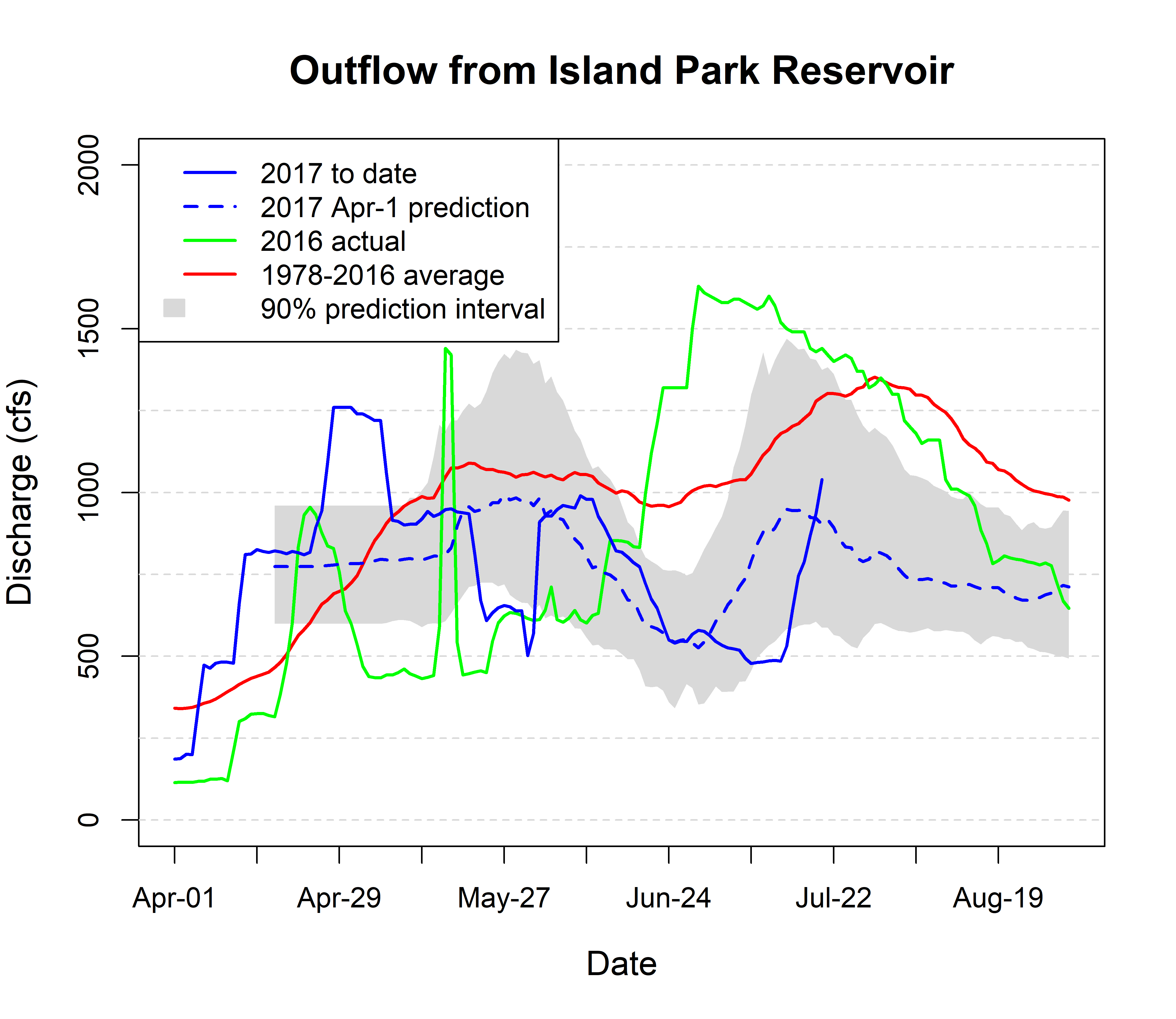 Forecast for Week of July 24

Looking ahead to next week, weather forecasts are starting to become more confident in measurable precipitation watershed-wide on Monday night and Tuesday. Some models are predicting very high moisture content in southerly flow at the same time as a low-pressure trough and cold front arrives. Depending on timing and location, precipitation could be locally heavy. If this occurs, streamflow in both Fall River and Teton River will increase starting on Tuesday, and irrigation demand will decrease. Even in absence of widespread rain the valley areas, I anticipate noticeable decreases in diversion to begin late next week as grain finishes. Regardless of precipitation, humidity will increase and temperature will decrease next week, reducing evapotranspiration. Although it is too early to tell 3-4 days out from the forecast precipitation event, it is possible that storage delivery has already reached its maximum for this irrigation season, and small cuts to delivery from Island Park Reservoir may be possible late next week. At worst, an additional 100-150 cfs will be needed next week to get over peak irrigation demand for the season.