The past six weeks have flown by. I’ve spent the time working, exploring, and adventuring around, enjoying every minute of the wild west that I get to experience.

My original project was to develop a mobile app for android for the Henry’s Fork Foundation website. Due to the limited time that I have and the difficulty of application development, I proposed an alternative project-  a revamp of the Foundation’s mobile website. This was deemed a good option and I spent a few weeks learning CSS and HTML; the languages of web development. The project is coming along nicely and I will definitely have it finished by the end of my time here. Check out a preview of the homepage.

Aside from programming, I have also been assisting in the field work that the Foundation performs. I’ve gotten to help taking water samples at a variety of sites along the Henry’s Fork and assisted in the creel and economic value surveys that are being administered this year.

My free time has been focused on getting outside as much as possible. This got much easier when my roommate, the Stanford intern, Zac, arrived. I had been in desperate need of a climbing partner for the summer and to my happiness one moved into my room! We joined a climbing gym in Idaho Falls and have been trying to go at least a couple times a week. We’ve also gotten climbing outside a few times.

The first time we went to a crag nearby named Paramount Crag. As is to be expected we ended up having quite an adventure. I botched the approach and we ended up hiking high above the crag, following scree fields that were not possible to hike back down. Upon realizing our mistake, we made the decision to continue on to the top of the crag in hopes of rappelling down. None of the anchors were reachable from the top so I ended up rigging a rappel on a tree. Because I didn’t want to leave any gear, I simply looped the rope around the tree and rappelled down. The rope didn’t quite reach the ground so I had to build another rappel station about twenty feet from the ground. Zac followed down to me, but when we went to pull the rope down it had gotten stuck. I learned a valuable lesson- don’t be cheap, set up a proper rappel. To fetch the rope, I had to ascend back up the rope and rig up a real rappel station. After this I rappelled back to the rap station I had built and had Zac lower to the ground. He then put me on belay and I down climbed to ensure that I didn’t have to leave any gear. After this far more difficult approach than anticipated we got to climb a number of good routes, both our first climbs in Idaho. 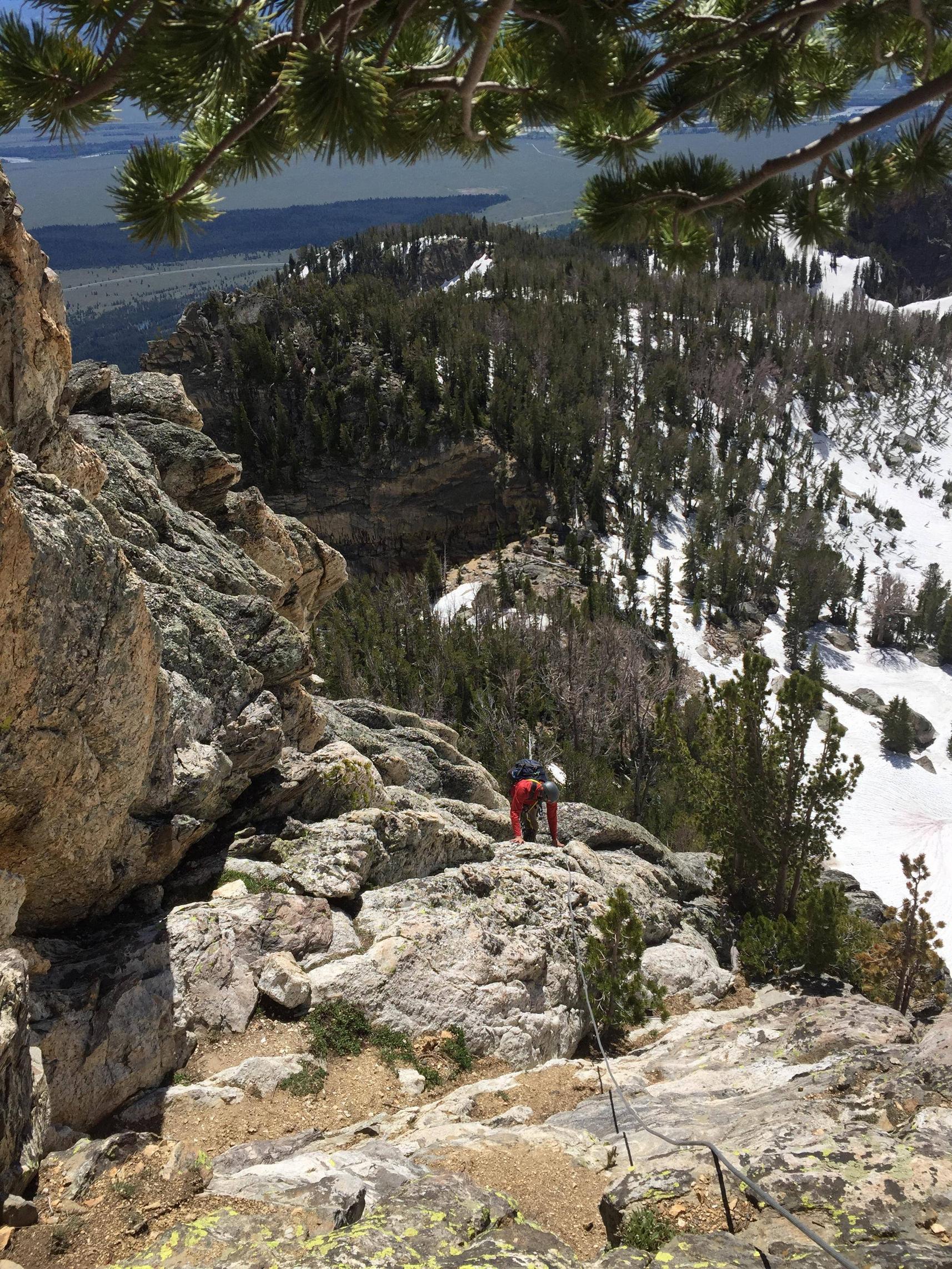 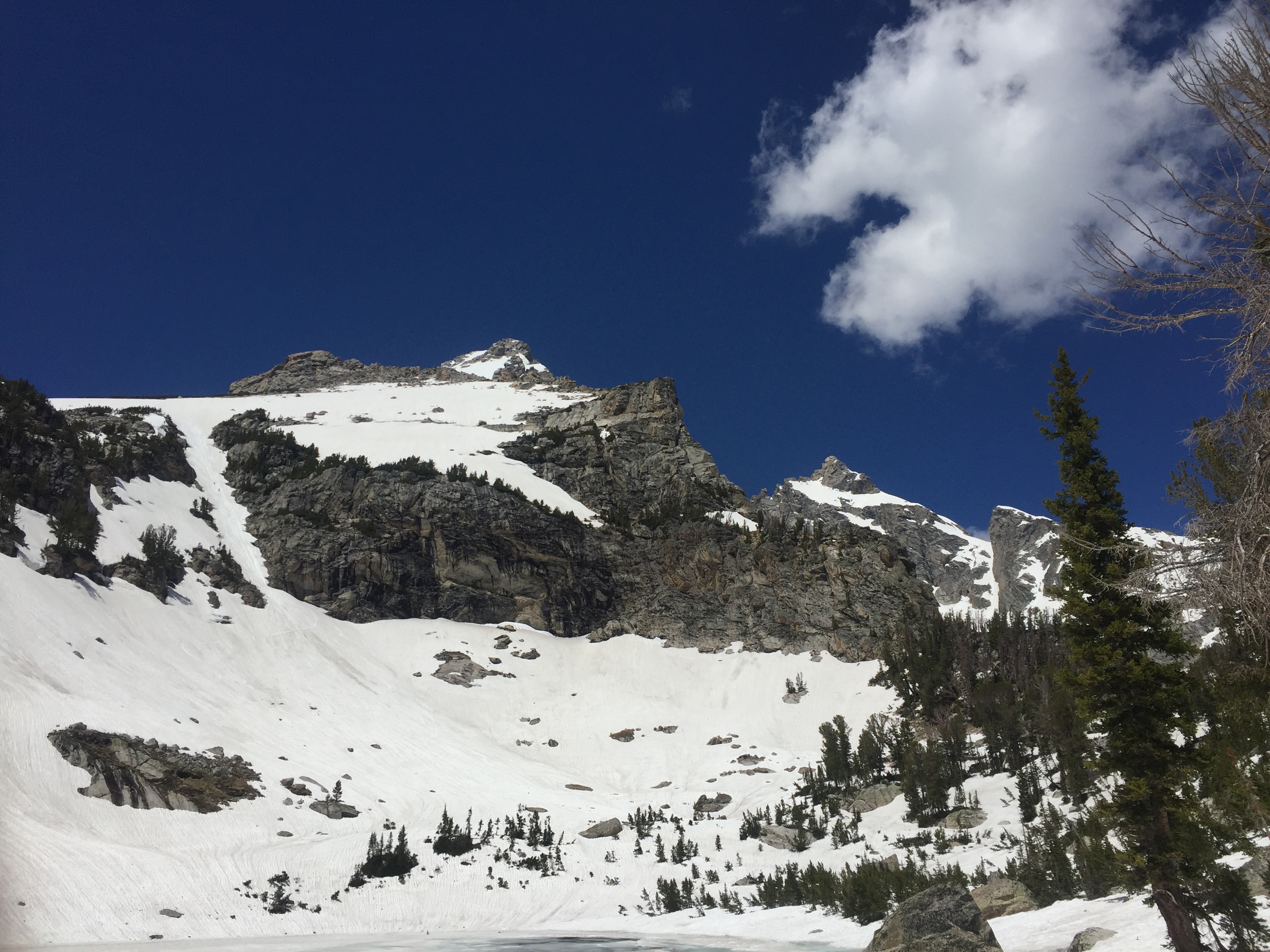 Undeterred, we headed out the next weekend to Grand Teton National Park with hopes of climbing Disappointment Peak. Listed as having an approach of “only” 5 miles and containing 6 pitches of easy rock I figured this would be a great introductory climb to alpinism in the Tetons. Upon reaching the area below the climb we discovered remnants of a long and snowy winter; the lake was still frozen and there was snow all over the peak. We had asked questions at a local gear shop and knew the route would be free of snow, but there was no way we could safely do the down climb from the summit without crampons and an ice axe. From the base of the climb I spotted a number of trees to rappel off of and knew that we could at least get a bit of climbing in on the route. We were able to climb about half of the route before finding no more trees to bail off of above. Despite not getting to enjoy the full route, Zac and I were still awarded with plenty of beautiful views and a few fun pitches of climbing.

The next day Zac and I headed to a crag in Idaho’s Teton Canyon for some sport climbing. To beat the heat we headed to the Shady Wall, a face of rock in the woods, shaded from the brutal sun. This wall was covered in awesome routes, many of them far too difficult for me. We got to try some really hard routes and enjoy fun movement on a cool piece of rock.

Following this exciting weekend of climbing I drove to the Jackson Hole airport to pick up my girlfriend, Isabel. We had plans to visit Yellowstone and Red Lodge, Montana for the fourth of July weekend, as well as go hiking and enjoy the area around Ashton.

First stop on the road trip was Jackson. We headed into town to visit friends and camp at the Curtis Canyon Campground, a beautiful area of Forest Service land with numerous free campsites, located just outside of Jackson. 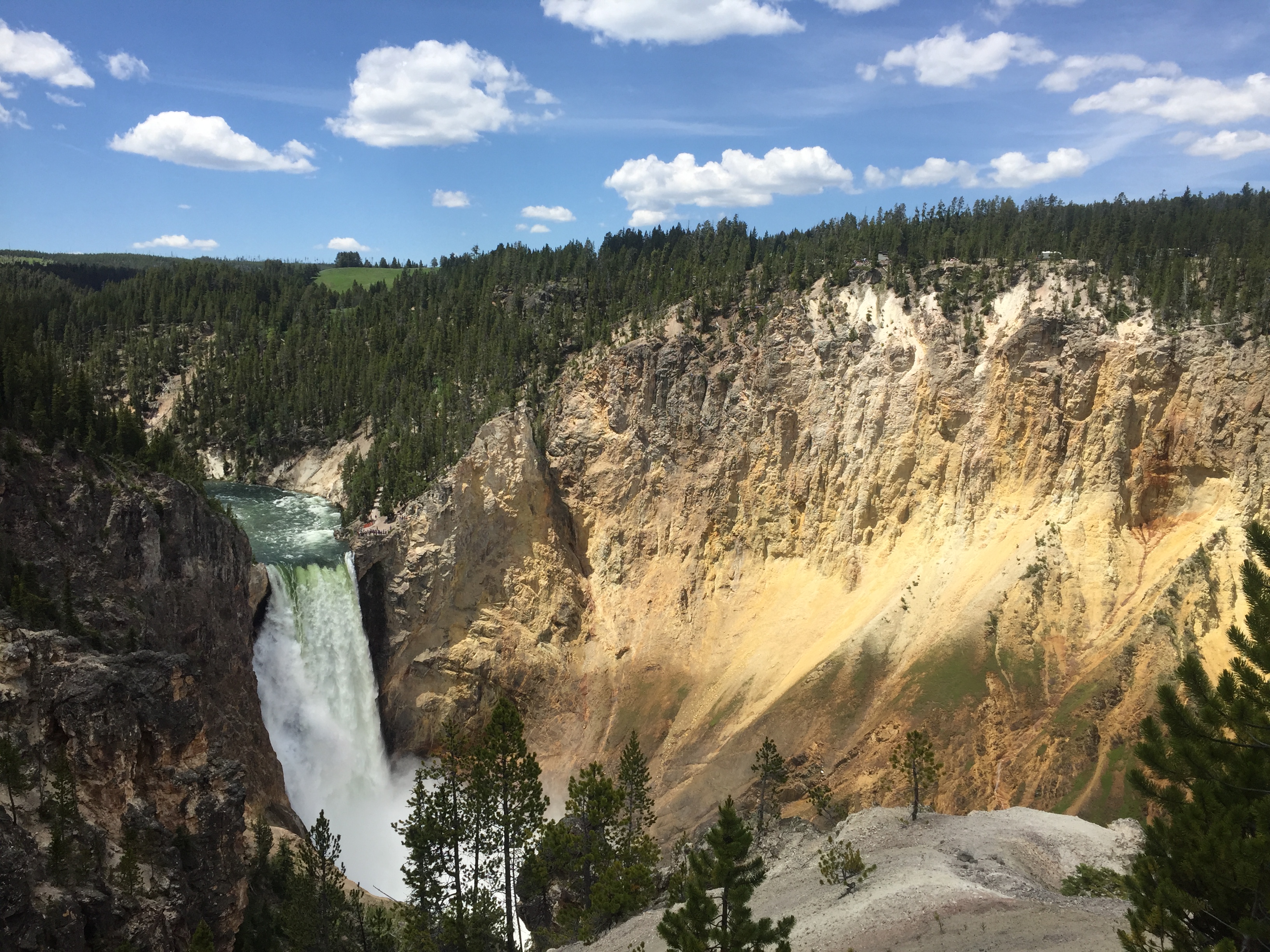 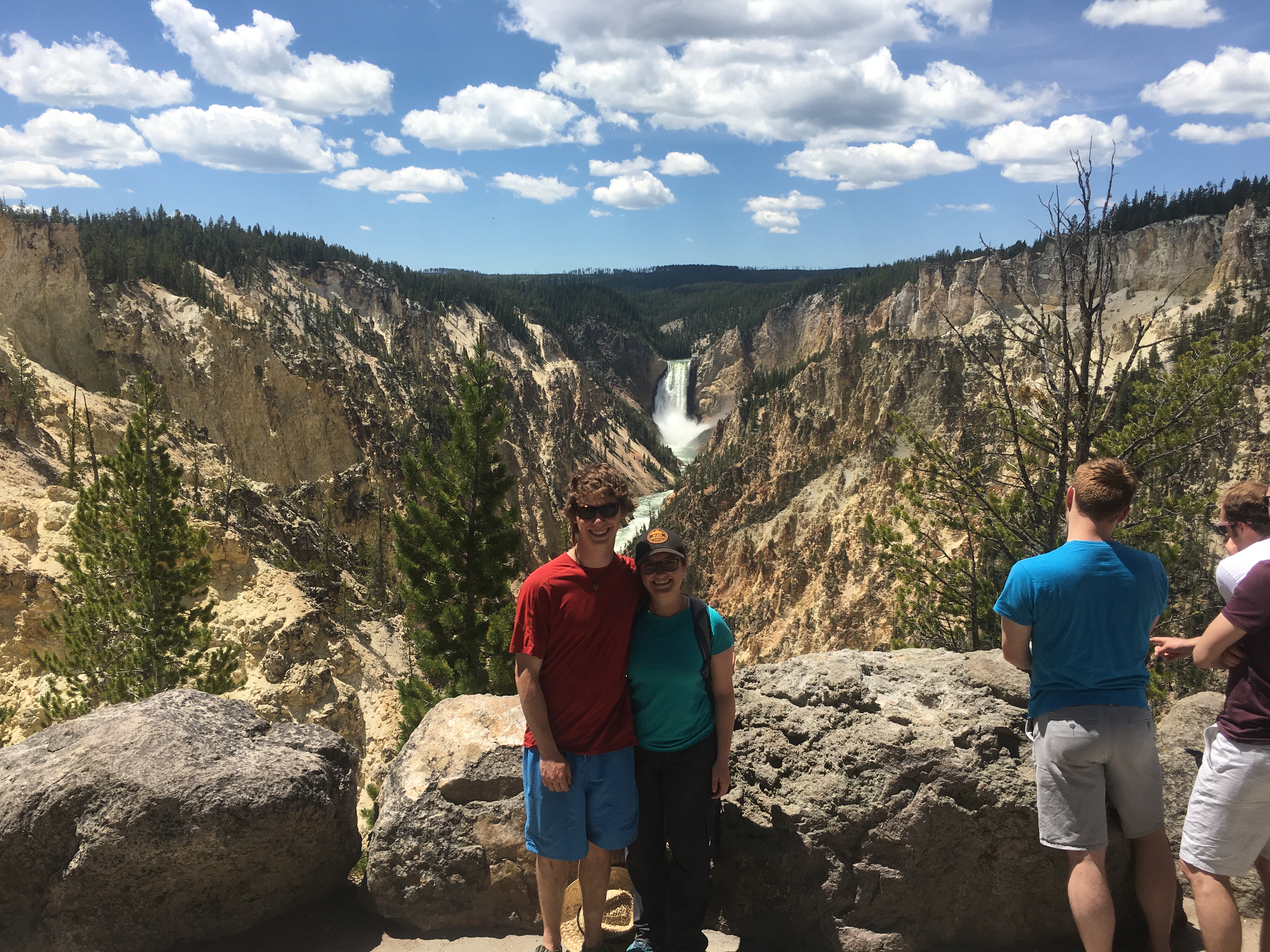 From Curtis Canyon Campground, we headed up the highway and into Yellowstone National Park. I had driven through on my way out west, but didn’t spend much time sightseeing in the park. Isabel had been to the park with her parents when she was young. We spent our first day viewing wonderful geysers, colorful hot springs, and plenty of bison, before camping at a campsite in the park. We were lucky enough to get one of the last campsites available at the campground.

The next day we explored the Grand Canyon of Yellowstone. The huge Yellowstone river roaring hundreds of feet below provided a wonderful backdrop for a day of hiking and sight-seeing. Our hike ended at Mystic Falls, a giant, booming waterfall that drops down into the canyon. We spent the night at a cabin near Mammoth Hot Springs and ate an excellent meal in the nearby restaurant. We munched on Elk sliders as Elk ran by outside, sipped on Yellowstone wine, and enjoyed smoked trout and a bison steak. 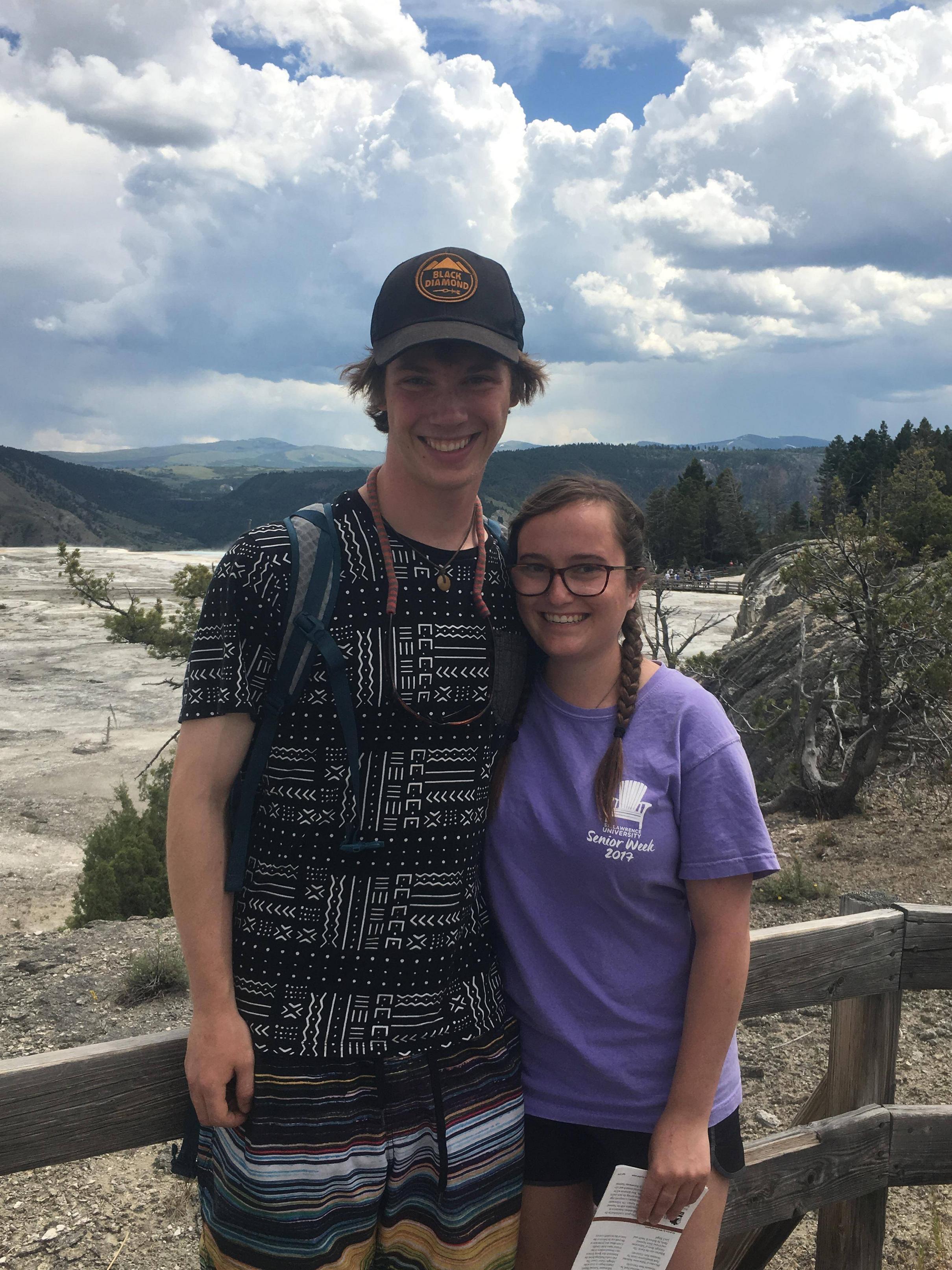 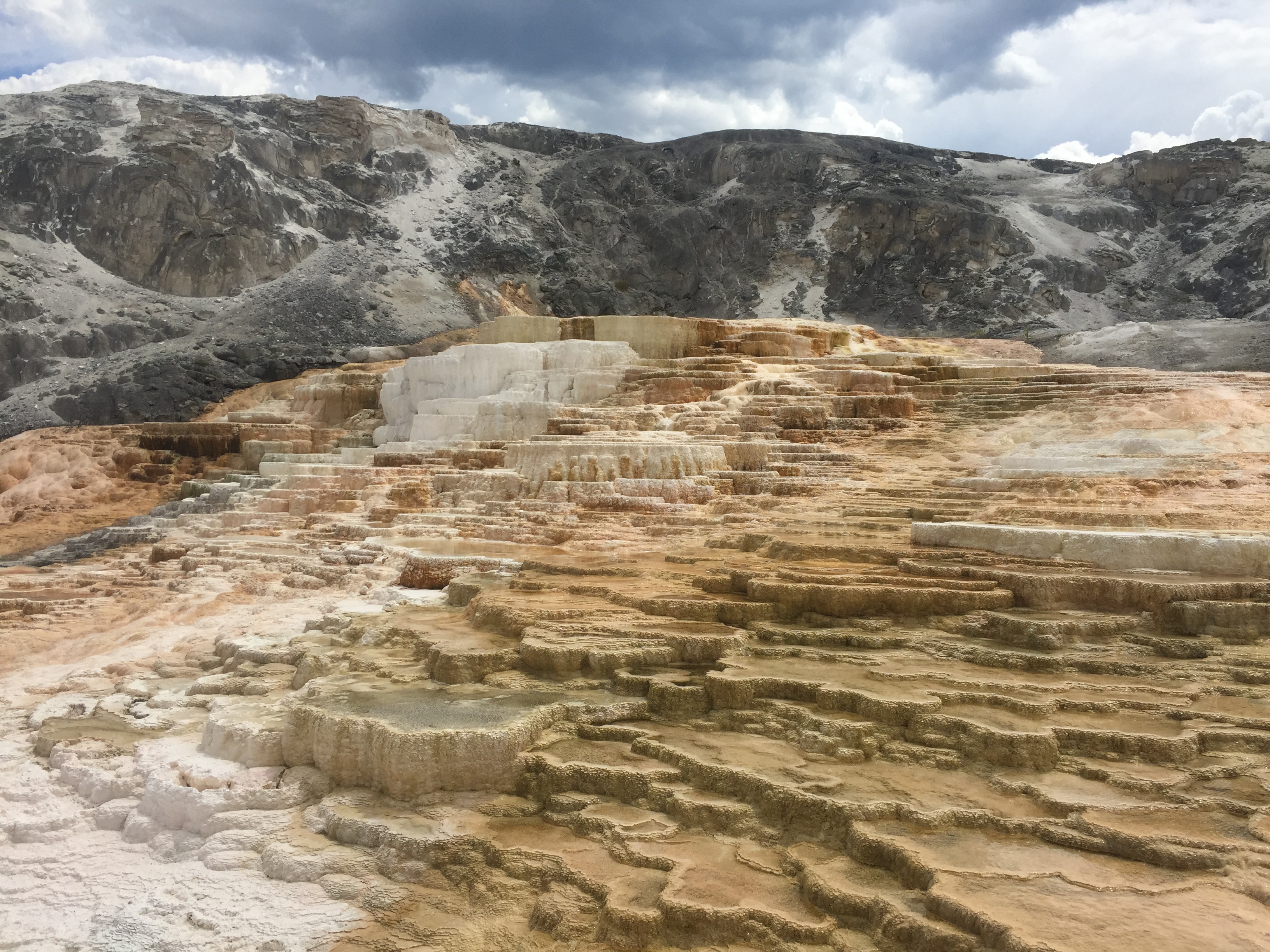 Our final day in the park brought us to one of the most unique places I have ever been; Mammoth hot springs. Mineral water from underground springs rises up and spills out over the ground. The minerals deposited by this water build up over many years to form gorgeous colored mounds.

Following the adventure through Yellowstone we drove over the Beartooth pass (with a quick stop for a snowboard run) and into Red Lodge, Montana to spend the Fourth of July with a friend of Isabel’s from St. Lawrence.  Patriotism was at its finest on the holiday. Everyone was decked out in their most American clothing and flags dangled from car after car as they came down the street in the parade. In the evening, we headed to where it seemed everyone else in the town were going: the rodeo. I had never been to a rodeo before and found myself incredibly impressed by the balance and skills of those able to stay atop a bucking horse.

Our trip concluded after the rodeo. We headed back to Ashton, back through Yellowstone with a beautiful sunset, and down highway 20 with fireworks lighting up the sky around us.