Although not as heavy as the rainfall received during the week of June 12, this week’s showers were heavy enough to increase streamflows again for a few days. Showers began on Monday evening and lasted through Thursday evening. Notable precipitation totals around the region were 0.9 inches at the Island Park SnoTel site, 0.5 inches at Ashton, and a whopping 1.5 inches at the Crab Creek SnoTel site in the Centennial Range west of Island Park Reservoir. This resulted in a large increase in inflow to Island Park Reservoir, which added a bonus 800 ac-ft to an already-full reservoir and increased outflow a bit as a small amount of flow spilled over the spillway. Streamflows watershed-wide this morning (June 30) were the same as they were on Monday morning (June 26), so the rain bought an additional four days of good water supply.

The following graphs show streamflow at key locations around the watershed, compared with average, last year’s flow, and my April-1 predictions. Inflow to Henry’s Lake, and streamflow in Fall River, Teton River, and Henry’s Fork at St. Anthony are all above average for the date, well above last year’s flow at this time, and above my April-1 predictions. In some cases, flow exceeds the top of the 90% probability prediction interval, indicating less than a 10% chance that we could have observed flows this good given April 1 conditions. The upper Henry’s Fork–reflected here by inflow to Island Park Reservoir and flow at Ashton–are exceptions. While Island Park inflow jumped above average yesterday, streamflows in the upper Henry’s Fork watershed have been below average most of the past two months due to the effect of four years of drought on Big Springs and other spring-fed inflow that provides the majority of the water in the upper watershed. Nonetheless, upper Henry’s Fork streamflow remains above my April-1 predictions as a result of good precipitation in April and June. 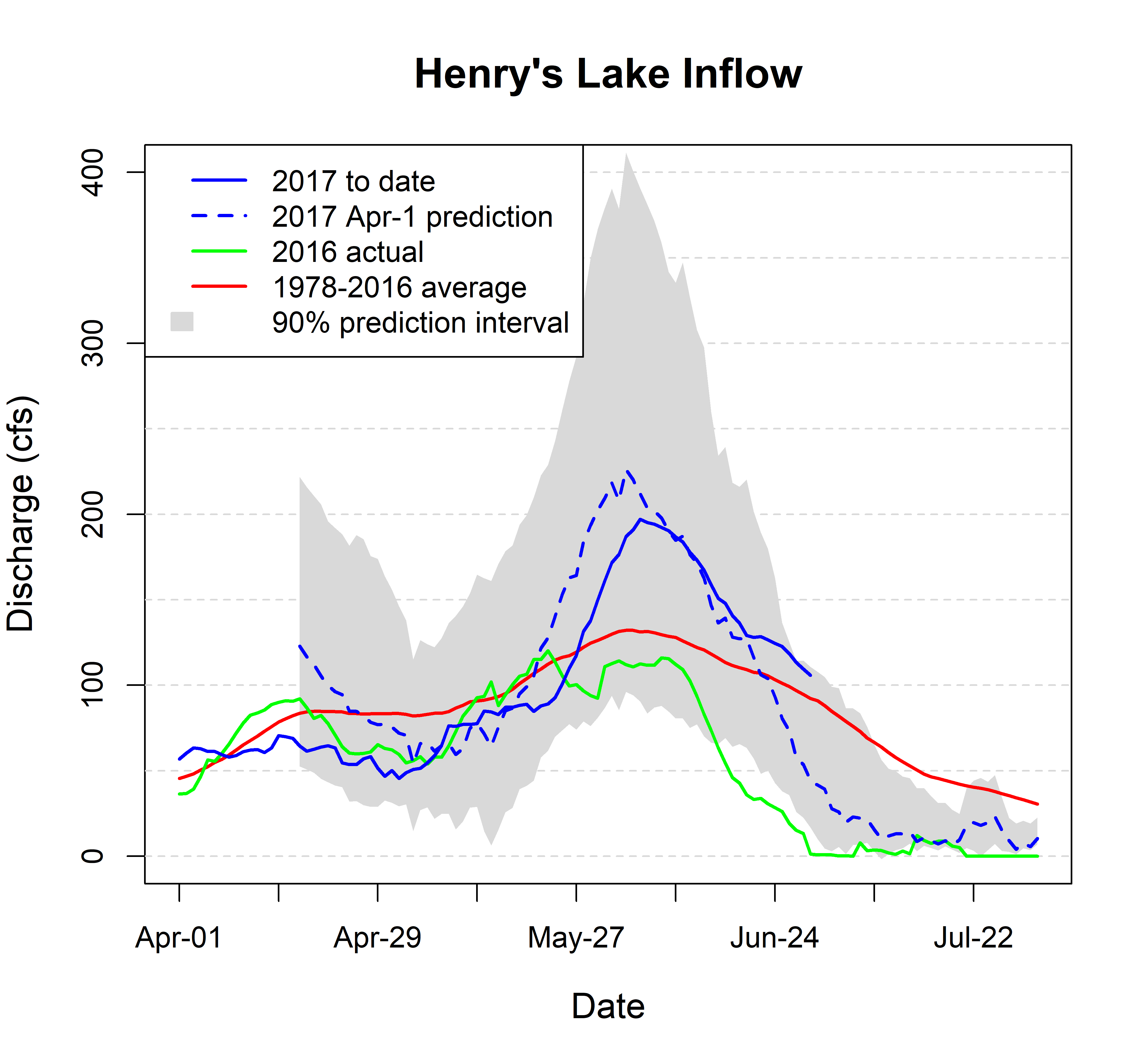 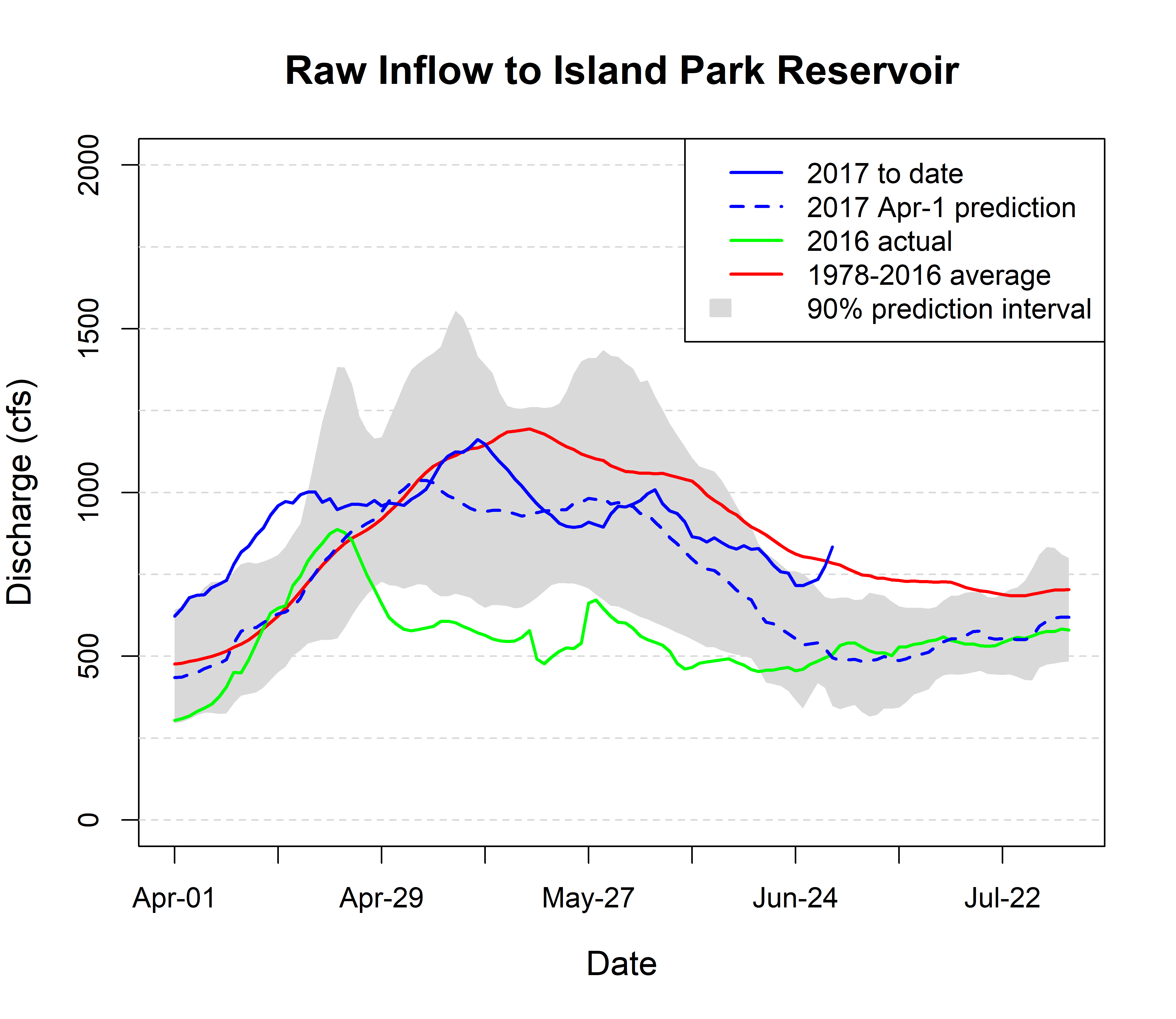 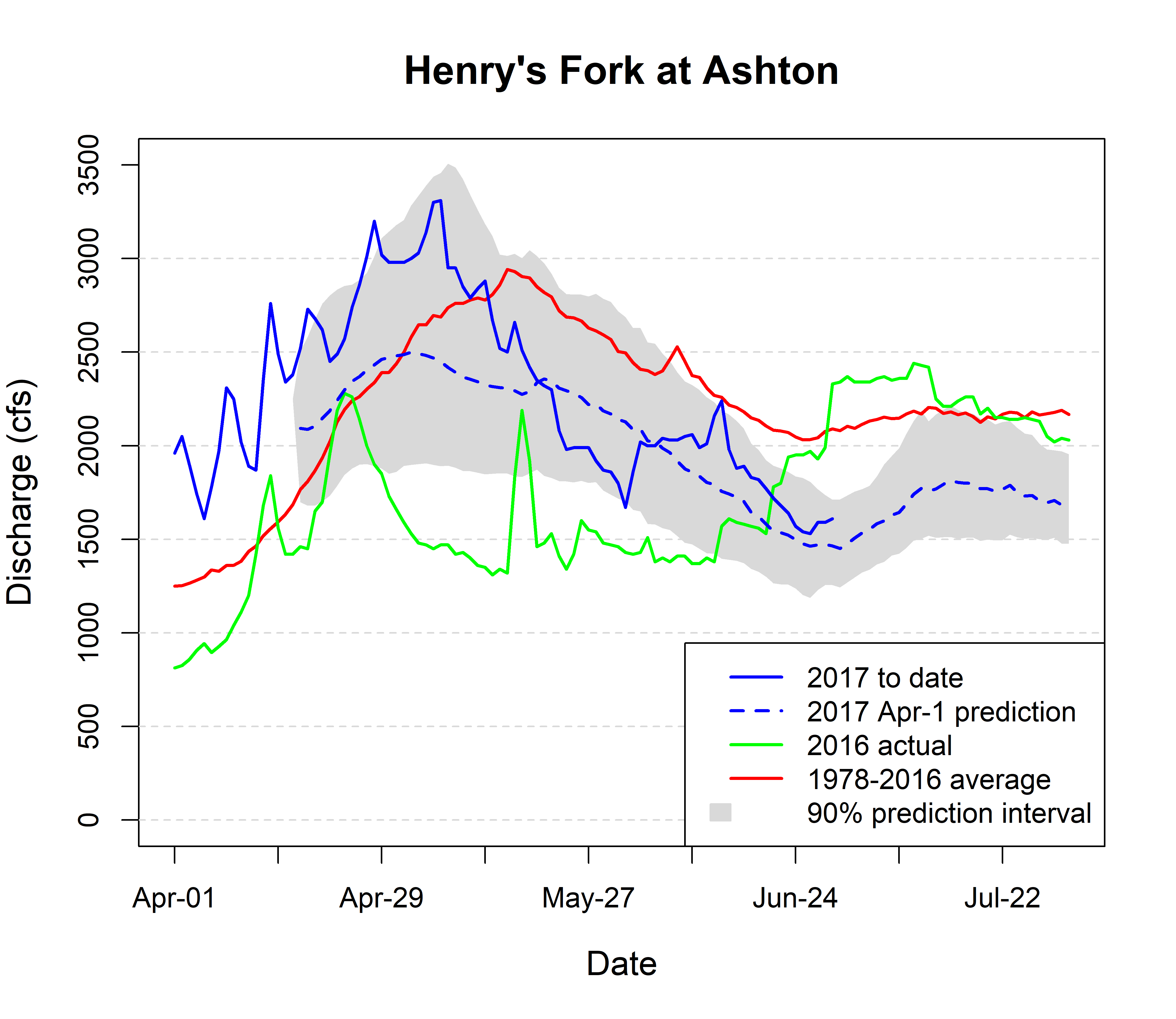 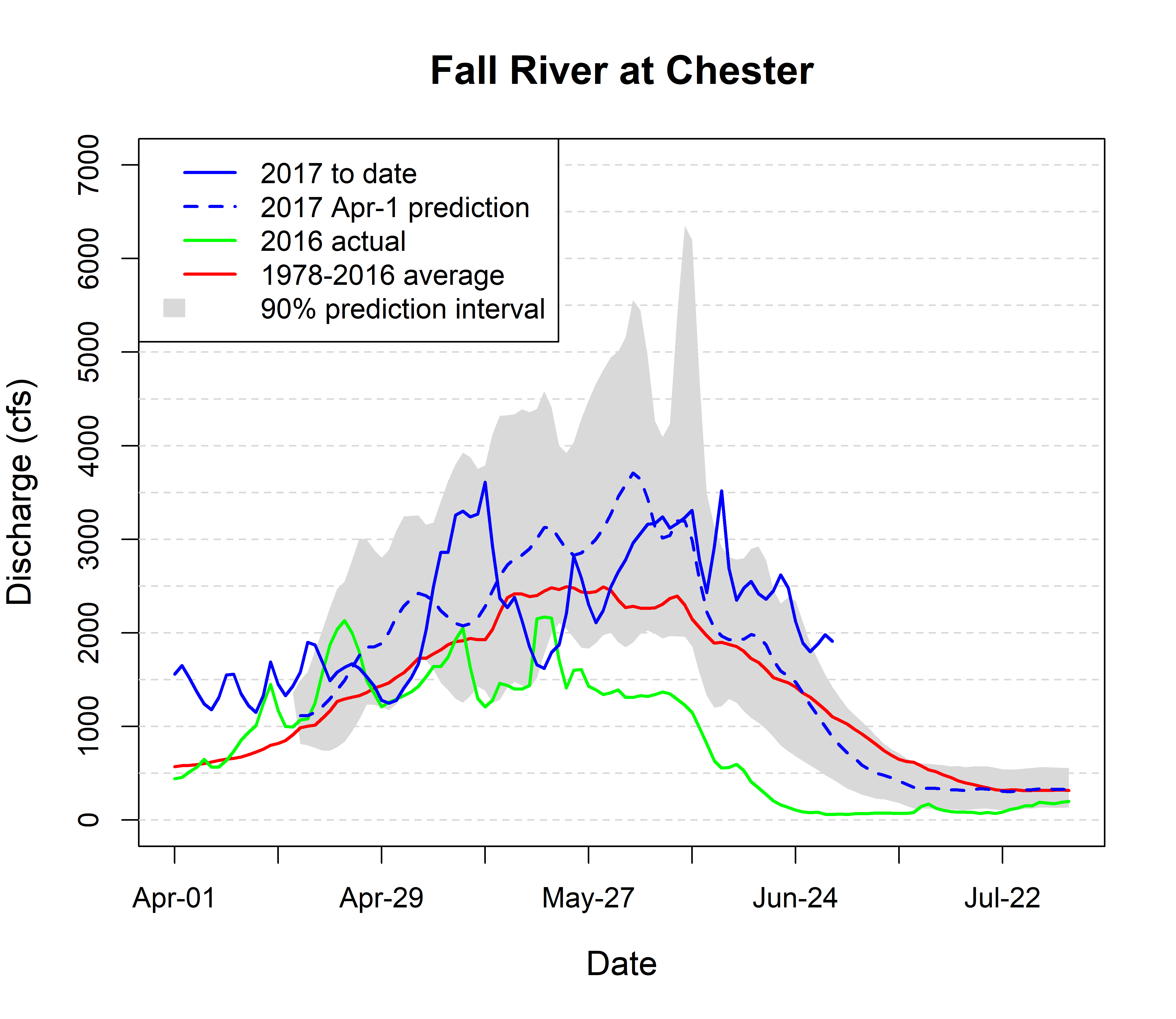 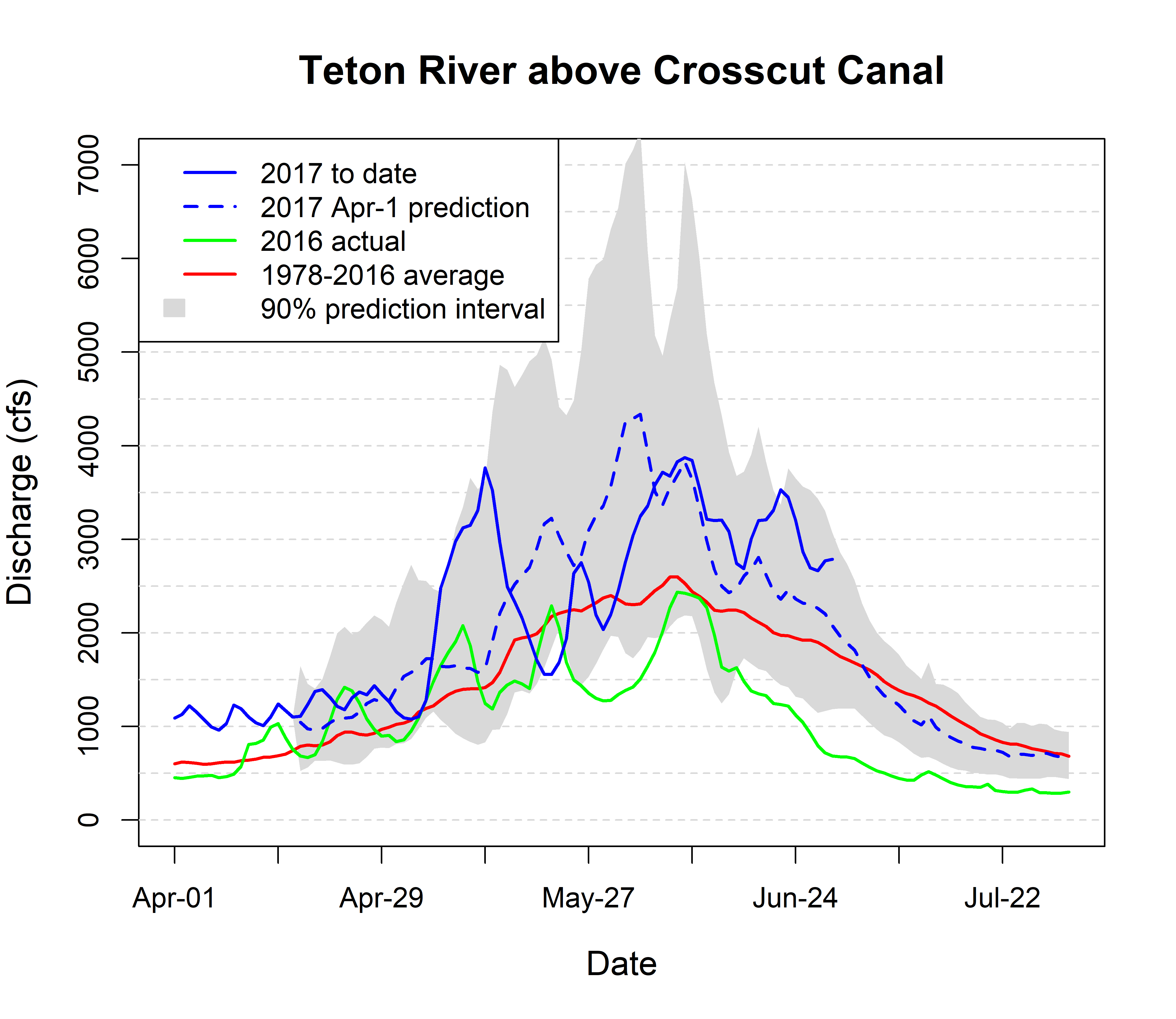 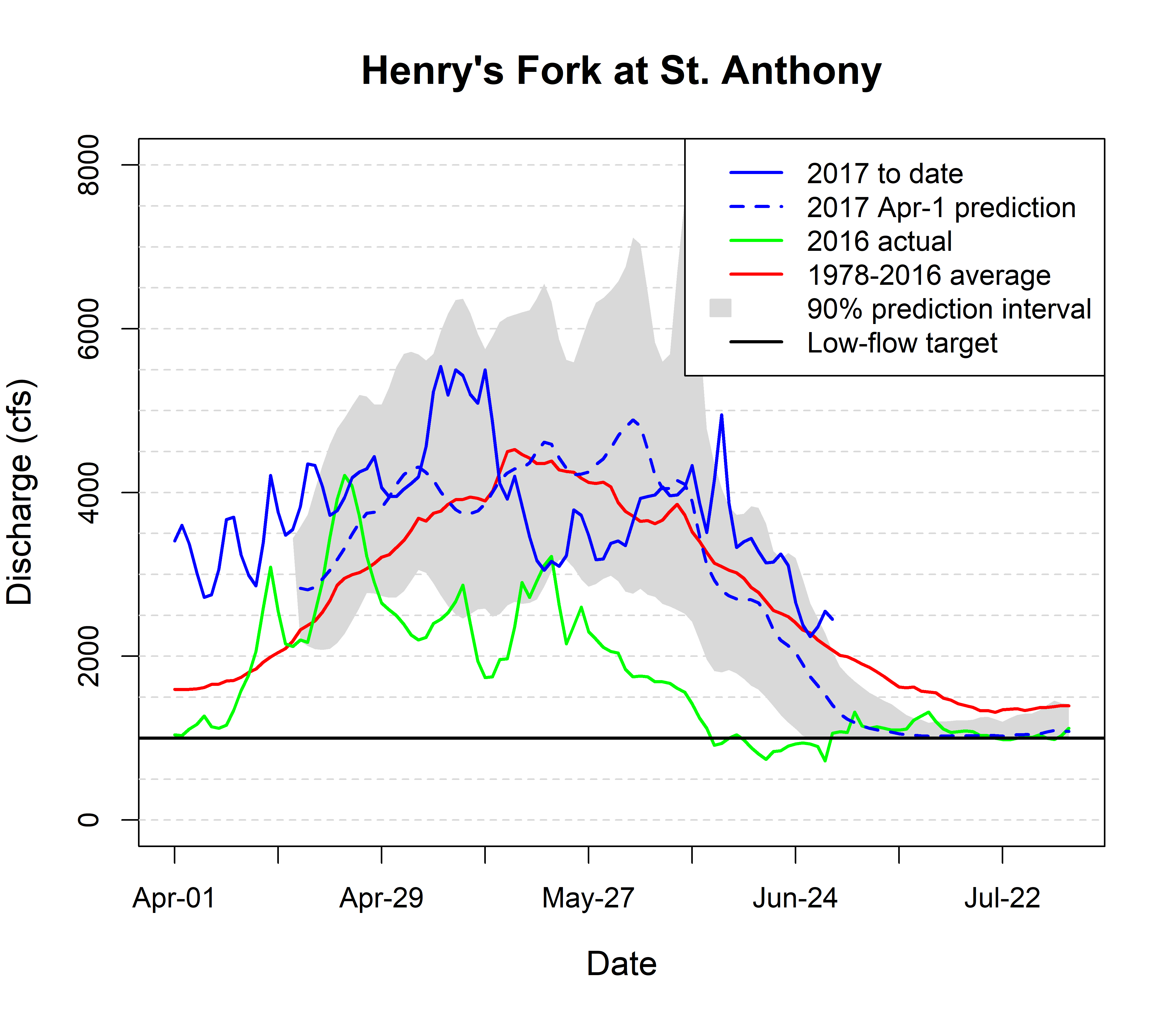 Watershed-total natural streamflow (upper Henry’s Fork + Fall River + Teton River) has generally declined over the past week but is still at 7,000 cfs. Total diversion increased during warm dry weather last week and is currently around 3,000 cfs. Thus, natural supply still exceeds demand by a wide margin, which is why no delivery of storage water from the watershed’s reservoir has been needed so far this summer. The trigger for need to delivery storage water out of Island Park Reservoir is flow at St. Anthony falling to 1,000 cfs, and the graph above shows that is still at least 5-10 days out, depending on how rapidly Fall River drops in response to hot, dry weather forecast for next week. The hot weather will probably melt high-elevation snow in the Teton River watershed and keep flows there high for another two weeks, but there is essentially no snow left to melt in the Fall River drainage. 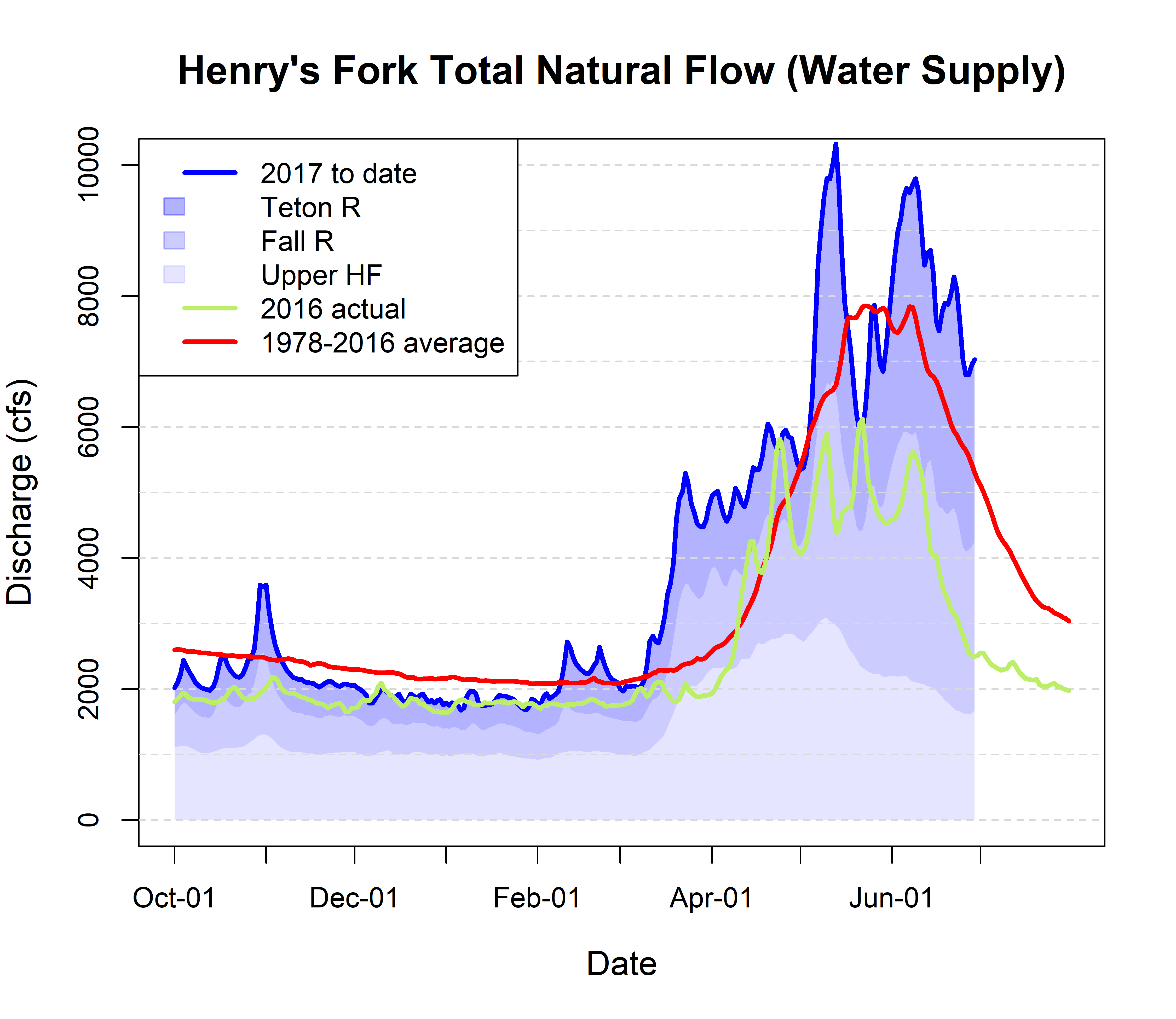 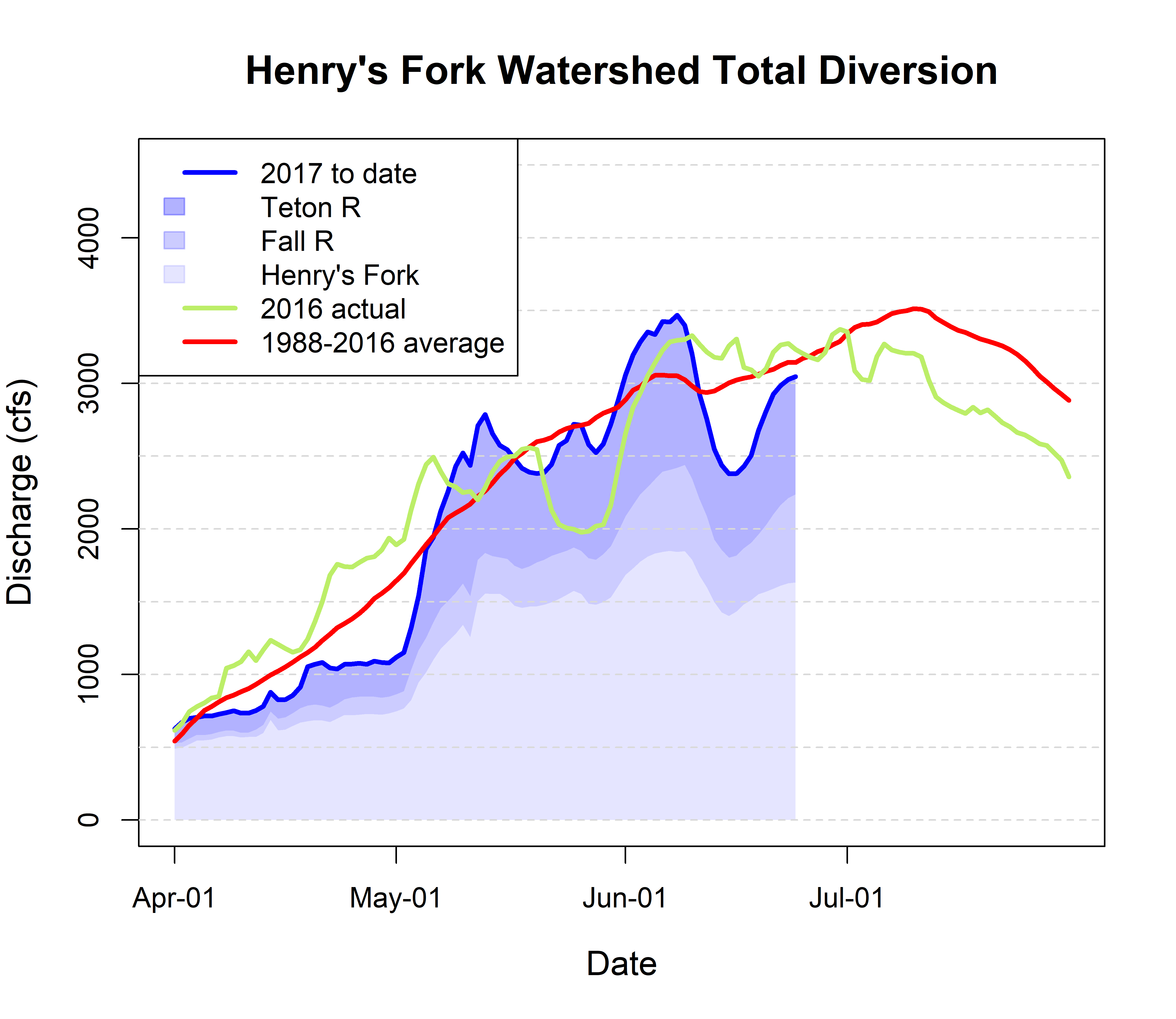 I have also been asked why water has not been delivered out of Island Park Reservoir over the past week to benefit the fishery. Over the past three years, 75% of HFF’s science effort has gone into quantifying the effect of Island Park Reservoir on water quality, fishing experience, and trout populations downstream. All of our research has shown that keeping as much water in the reservoir as possible all summer leads to:

In other words, releasing less water from Island Park Reservoir improves all aspects of the fishery downstream. Thus, it is NOT in the interest of the fishery to release any more water than absolutely necessary from the reservoir.

At current recession rates, streamflow at St. Anthony will fall toward 1,000 cfs toward the middle or end of next week, so increased release out of Island Park Reservoir may be required at that time. However, as we saw this week, even a modest amount of rain could maintain natural-flow supply for another week or so. Therefore, if a few thundershowers appear next week, it is possible that another week or 10 days may pass without need to deliver storage water out of Island Park Reservoir.

The graphs below show outflow from Island Park Reservoir and reservoir contents. The most striking feature of the graphs is the difference between this year and last year. Outflow yesterday was around 700 cfs, compared with 1,630 cfs last year on June 29. (By the way, that was the highest daily outflow recorded over the entire 2016 irrigation season.) Volume last year on June 29 was 108,921 ac-ft, compared with 136,007 ac-ft at the end of the day yesterday. Looked at another way, by this time last year, 19% of the reservoir’s capacity had already been delivered to meet irrigation demand, and the reservoir was dropping at a rate of 2,000 ac-ft per day. This year, we have a bonus 800 ac-ft in the reservoir over its nominal full-pool volume of 135,205 ac-ft. What a difference a year makes! 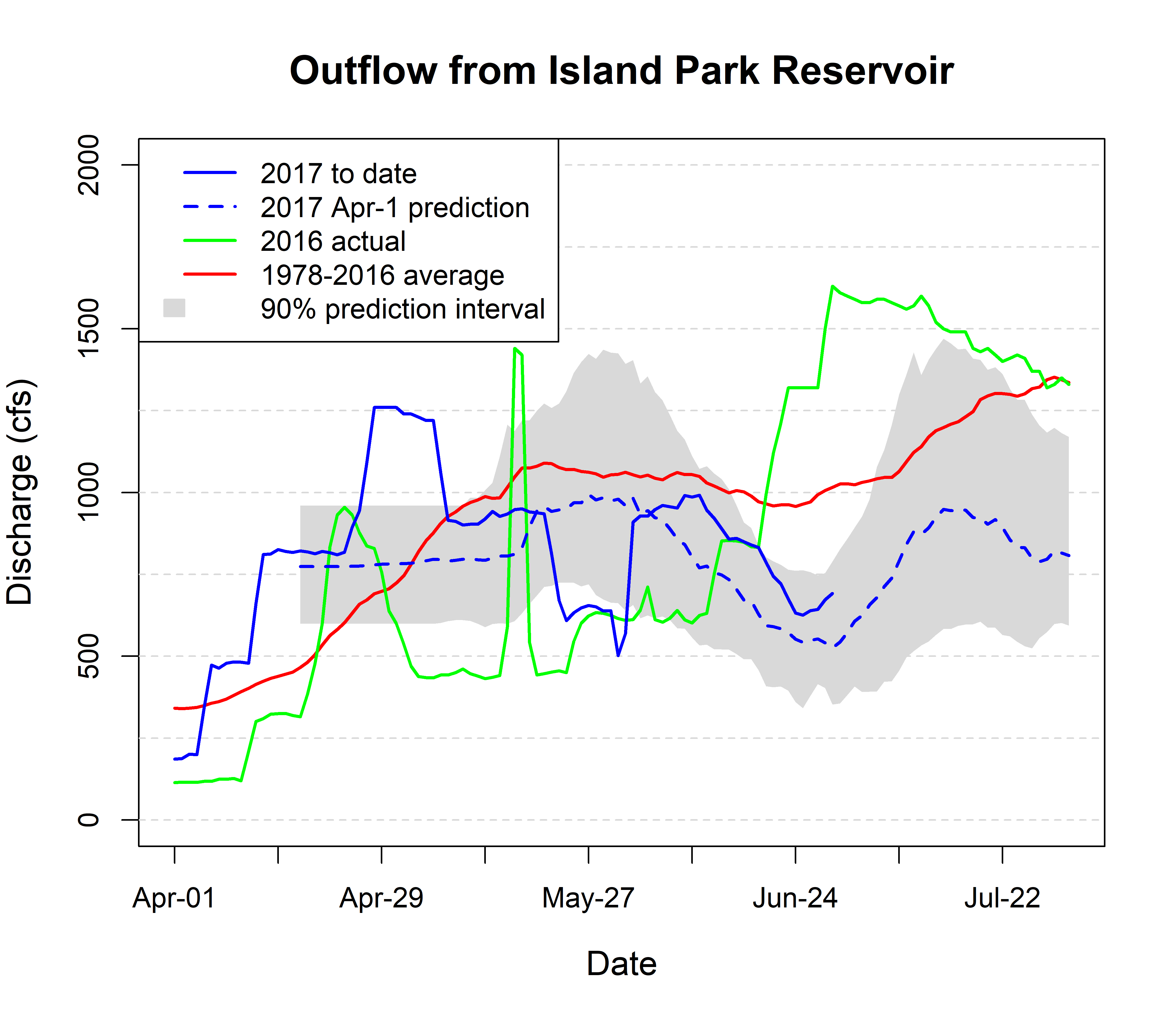 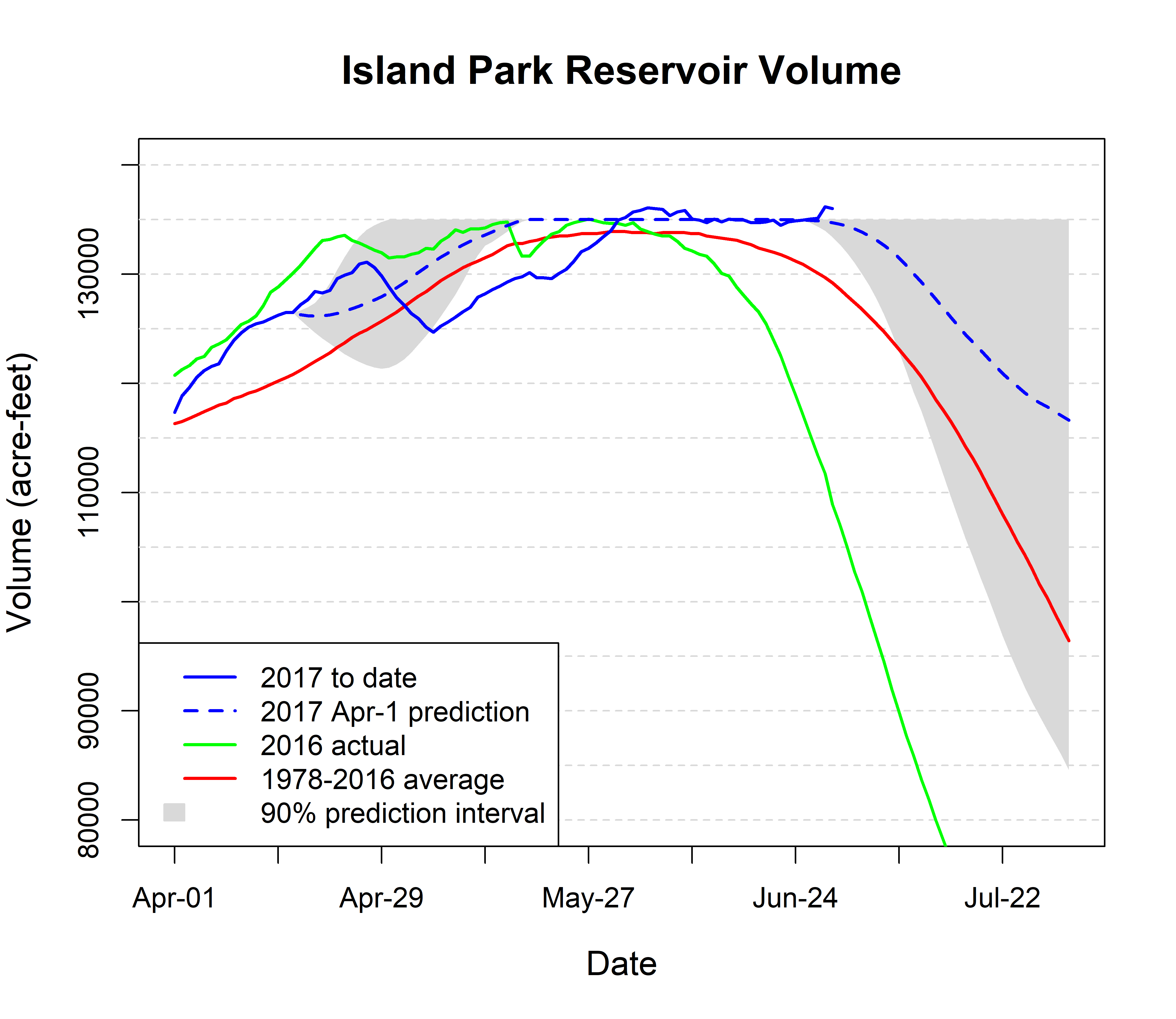