The week of June 11-18 brought cool weather, above-average precipitation, and even some snow at high elevations. The table below summarizes climate for the week. 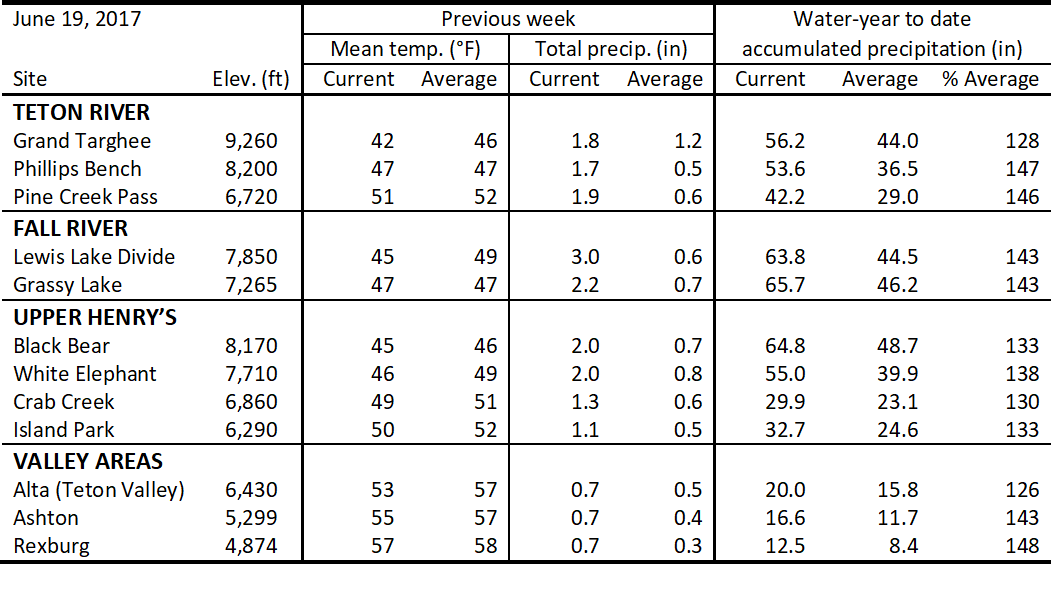 The resulting rain and new snow extended good streamflows out at least another two weeks. The graphic below shows total natural streamflow in the watershed, which remains around 8,000 cfs. This is about 2,000 cfs above average for the date and far above last year’s 3,000 cfs. Teton River and Fall River continue to increase, even as the upper Henry’s Fork continues to recede. Total watershed diversion dropped from over 3,000 cfs back to around 2,500 cfs during and after the rain, but it has since increased back up to around 3,000 cfs. Diversion will reach its mid-season peak of around 3,500 cfs within the next week, but the good supply will be more than enough to meet irrigation demand for at least another 10 days, if not two weeks or more. 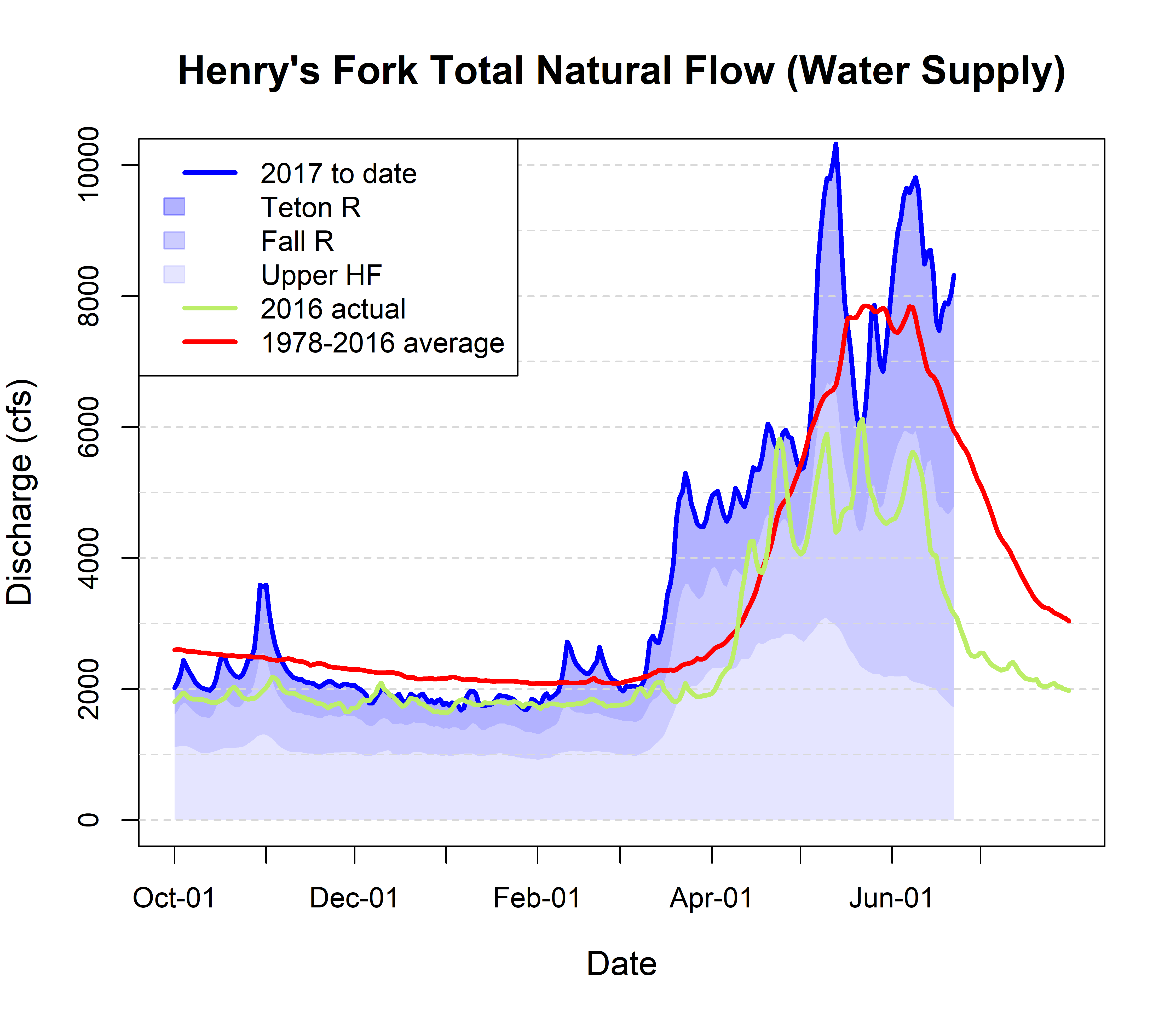 The graph below shows Island Park Reservoir volume, which is still 100% full. Last year at this time, 15,000 acre-feet (11% of capacity) of water had already been delivered from the reservoir, which was dropping rapidly. 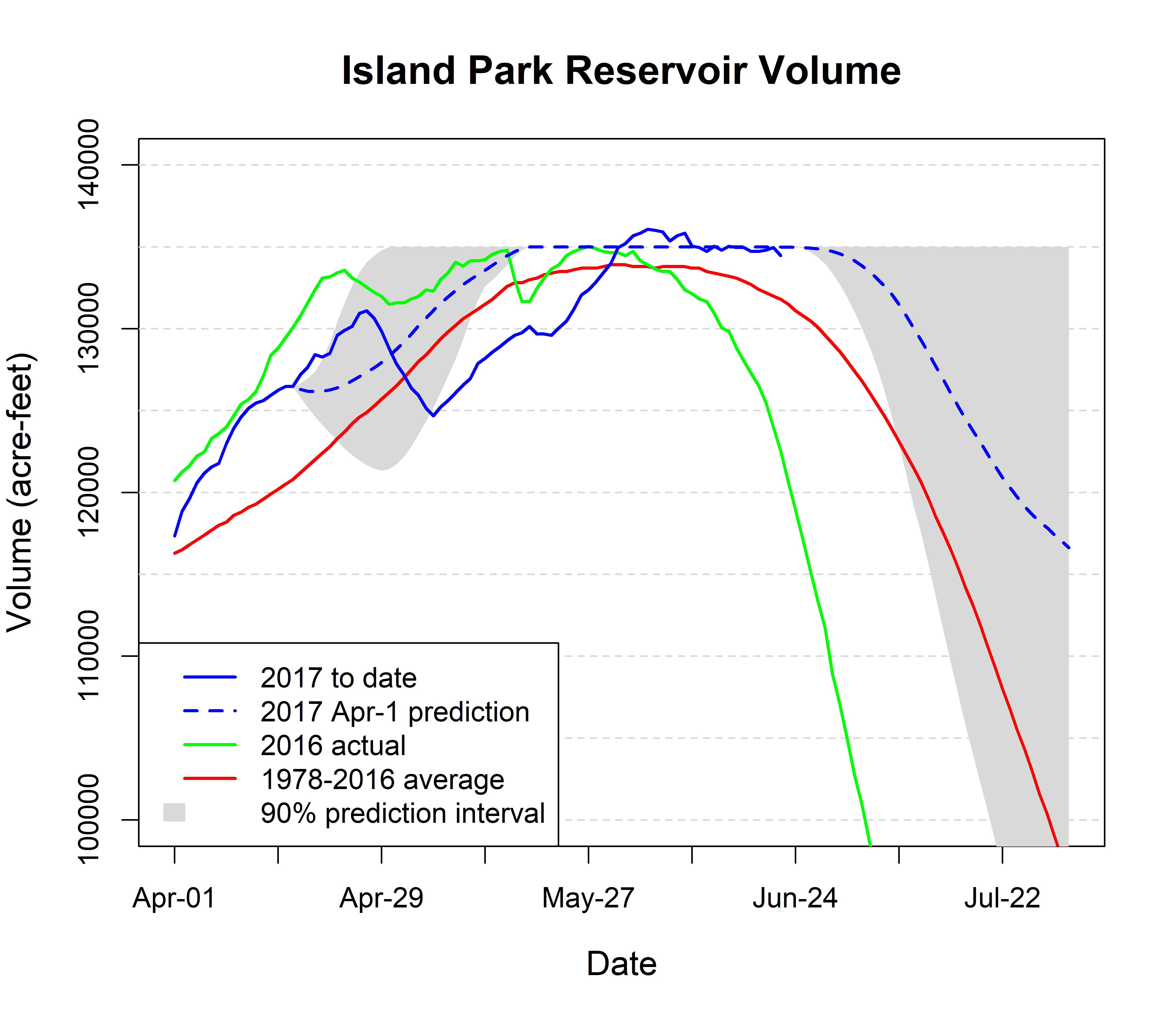 The following two graphs show inflow to and outflow from Island Park Reservoir. Because Henry’s Lake is full and passing its natural inflow, the inflow to Island Park is the river’s natural flow. Outflow is being reduced gradually to match natural inflow recession and keep the reservoir full. Note that inflow to and outflow from Island Park Reservoir are both below average for this time of year. In fact, throughout the upper Henry’s Fork watershed, streamflow is only about 85% of average, reflecting early runoff of this year’s snowpack and the negative effects of four dry years on flow from Big Springs and other springs in the watershed upstream of Ashton. Note also that the predictive model based on April 1 conditions is performing quite well in predicting Island Park Reservoir inflow and outflow. 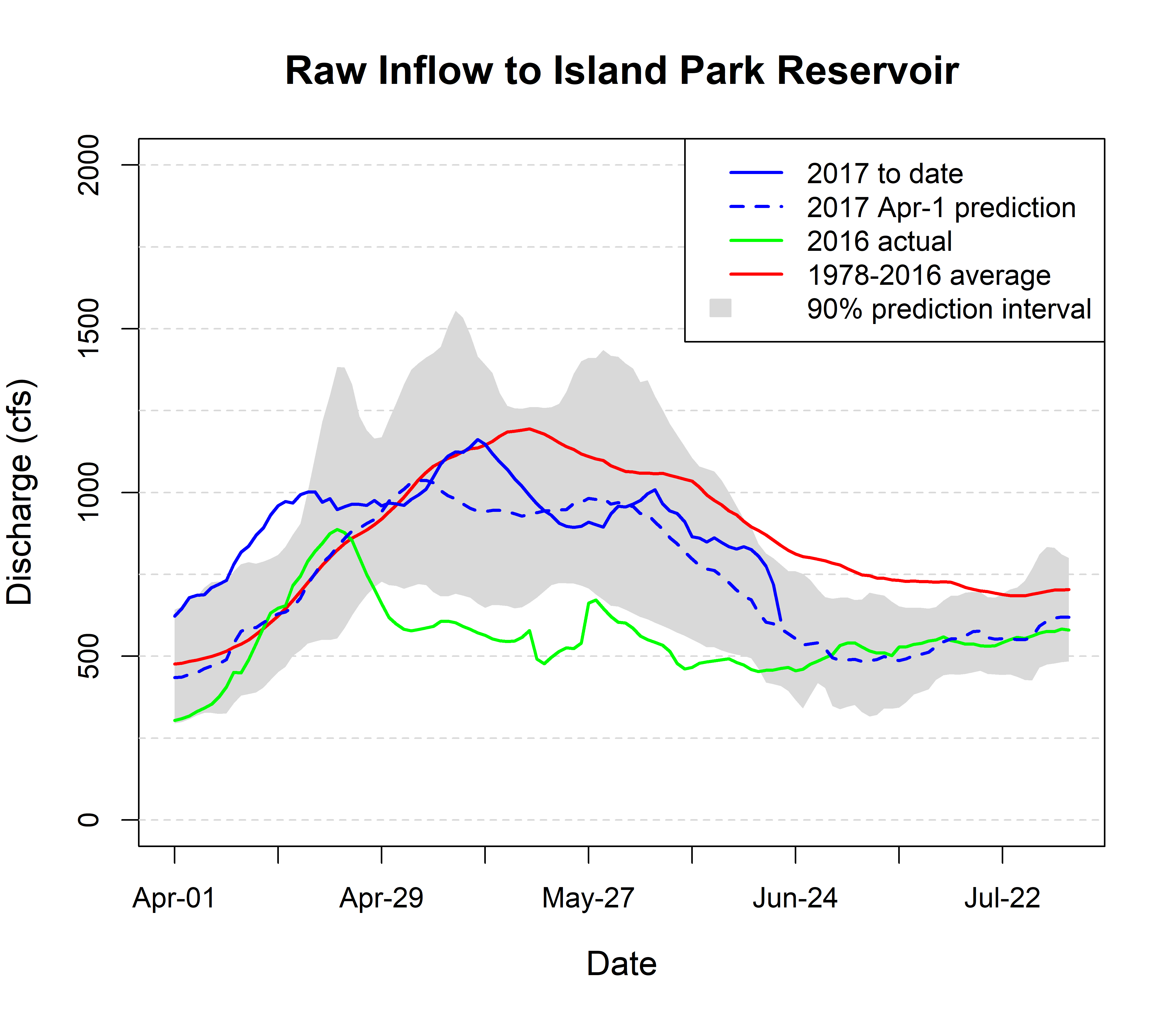 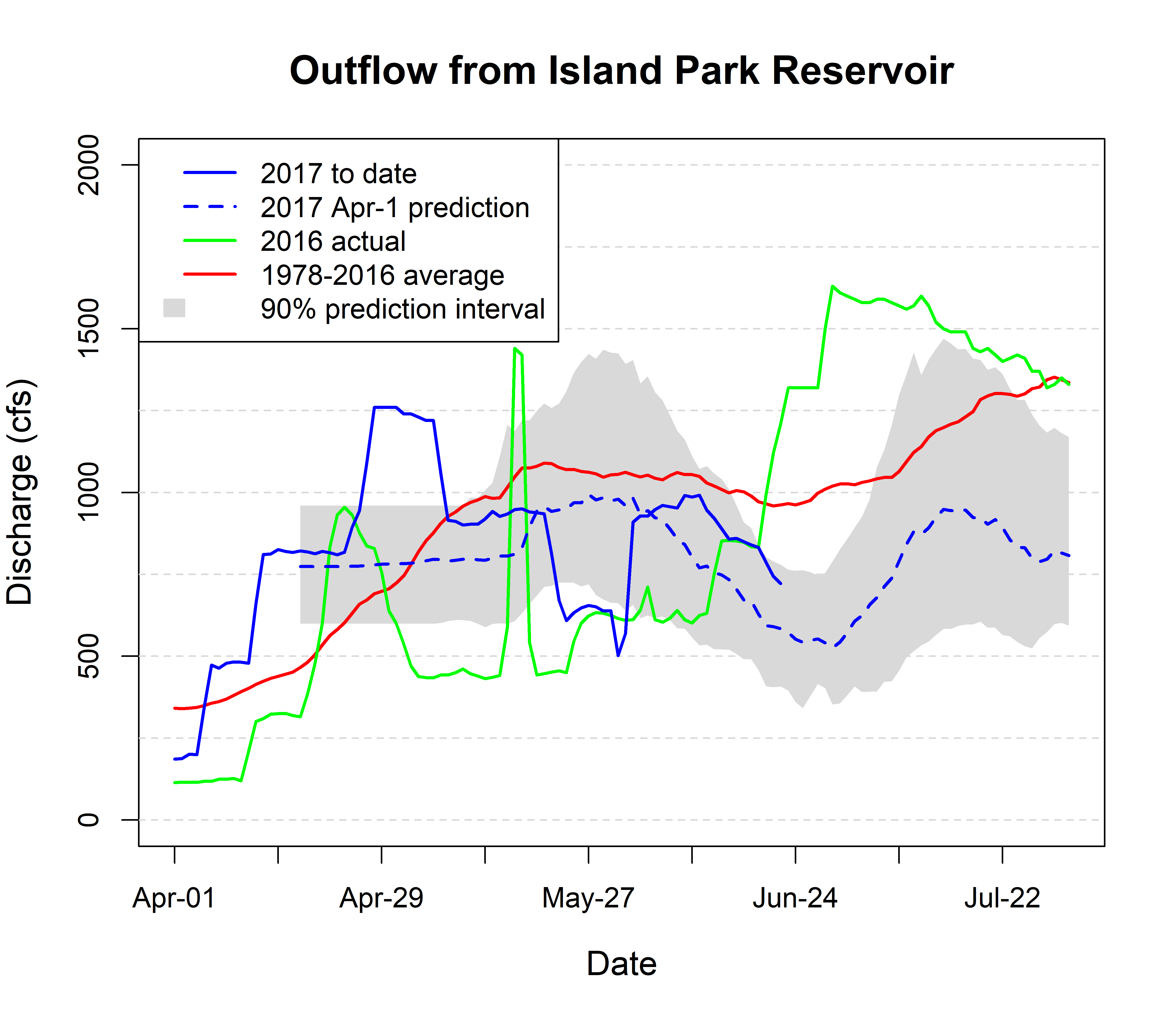 The trigger for need to deliver water out of Island Park in excess of its inflow is when the river at St. Anthony drops to 1,000 cfs. The graph below shows that flow at St. Anthony is still well above this flow target. Prior to last week’s rain, flow as very closely following the model-predicted recession, which would have reached 1,000 cfs around July 8. However, last week’s rain greatly increased streamflow at St. Anthony, which is now following a trajectory right at the top of the 90% probability flow predicted by the model. The 90% probability interval shows the range of flows that could have occurred with 90% probability, given the watershed conditions on April 1. If flows stay at the top of that interval over the next month, they may never drop to the 1,000 cfs trigger. However, I anticipate that once last week’s rain–and melt of the remaining high-elevation snow–makes its way through Fall River and Teton River, flow at St. Anthony will fall to near 1,000 cfs around July 15. Thus, with any luck delivery of water from Island Park Reservoir will not be needed for another three weeks. Last year, the 1,000 target was reached on June 10, prompting delivery of Island Park storage water at that time. 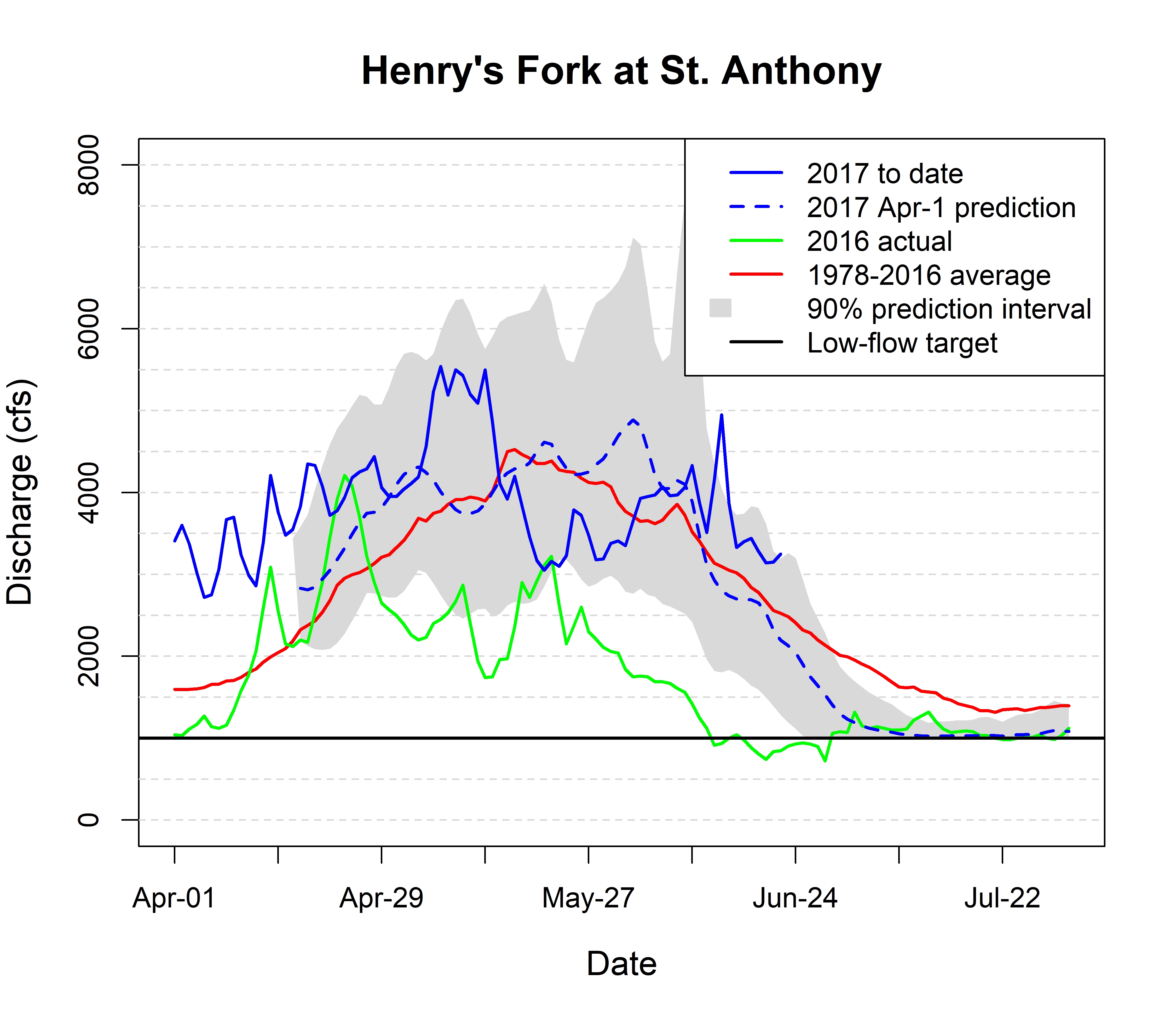 The last graph shows turbidity in the Henry’s Fork immediately below Island Park Dam, compared with last year’s value and our April-1 prediction. Our statistical modeling shows that turbidity is higher when inflow is higher, reservoir elevation is lower, and a higher percentage of outflow is discharged through the west-side gates vs. the power plant. So far this year, turbidity has remained low—generally below the model predictions. The short period of high turbidity during late May resulted from outflow in excess of power-plant capacity, requiring a few hundred cfs to be released through the gates. Once outflow was reduced to top off the reservoir, turbidity decreased. Turbidity is currently above last year’s value because of much higher inflow to the reservoir this year. In 2017, turbidity increased substantially in late June in response to very high outflows, requiring delivery through the gates. We anticipate that turbidity will remain much lower this year because delivery of irrigation water from the reservoir will remain low. 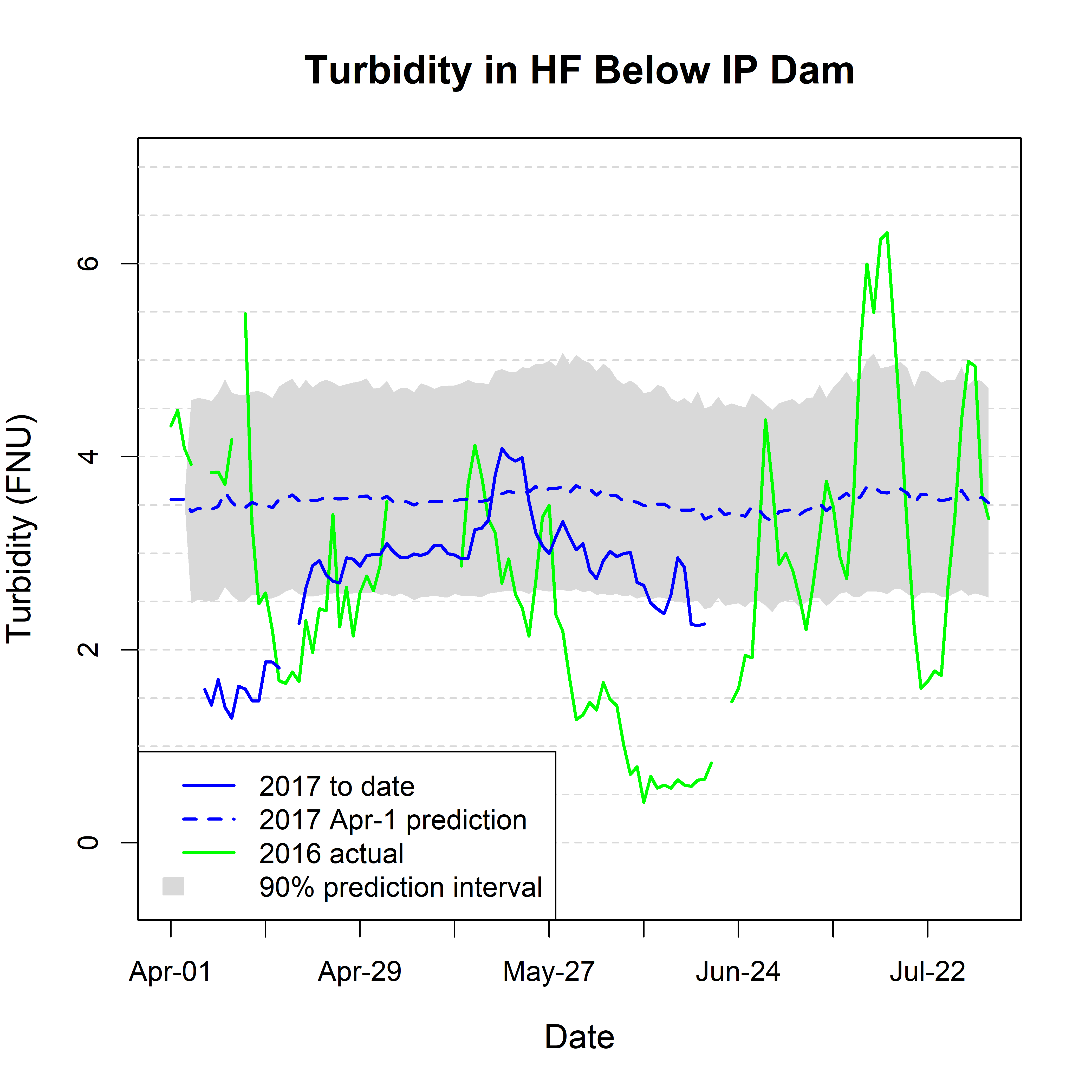