Every year the Idaho Department of Fish and Game (IDFG) conducts multi-pass electrofishing surveys on various river reaches in the Upper Snake River region. These surveys provide valuable information on abundance, age-class structure, fish size, and species composition within the fishery. Most recently, IDFG finished its annual survey in the Box Canyon reach of the Henry’s Fork. This post will highlight and explain some of the results of that survey.

Electrofishing is a non-lethal technique commonly used to sample fish in both large and small river systems. In small rivers (first and second order streams), multi-pass surveys can be conducted where crews block off a section of river, perform multiple passes (typically three passes), and remove fish from the reach during each pass. If the assumption that capture probabilities are the same for each pass and the population is closed, a depletion model can be used to achieve a population estimate (click here for details on this method).

For larger rivers, such as the Henry’s Fork, it isn’t possible to block off large sections of the river so a mark-recapture technique is used to estimate population abundances. This technique is done by floating through a river reach where fish are captured and marked. Several days later, a second round of sampling occurs through the same river reach where both marked and unmarked fish from the population are captured. After sampling is done, biologists will have three critical pieces of information needed to produce a population estimate; the number of marked fish in the population (n1), the total number of fish captured during the second sampling period (n2), and the number of marked fish captured during the second sampling period (m2). With this information you can use a simple Lincoln–Petersen model to estimate capture efficiency (m2/n1) and expand the total number of captured fish during the second sampling period (n2) by this capture efficiency to estimate abundance. The complete formula is below:

During the first float, 300 fish are captured and marked. During the second float, 600 fish were captured and 100 of them were marked. Since the electrofishing crew captured 100 out of 300 marked fish, their capture efficiency was 1/3. If their capture efficiency was 1/3 and they captured 600 fish during the second round of sampling, than the total abundance of the population is 1800.  Using the Lincoln-Petersen model, (300*600)/100= 1800 fish.

This year’s Rainbow Trout population estimate of 2,913 fish per mile is close to the long-term average (1994 through 2016) of 3,040 fish per mile for the Box Canyon reach. While the abundances aren’t as good as the pre-1994 era when this reach was either directly stocked or being regularly supplemented by stocked trout in the reservoir, these numbers are better than we anticipated given the tough water conditions the last three years. 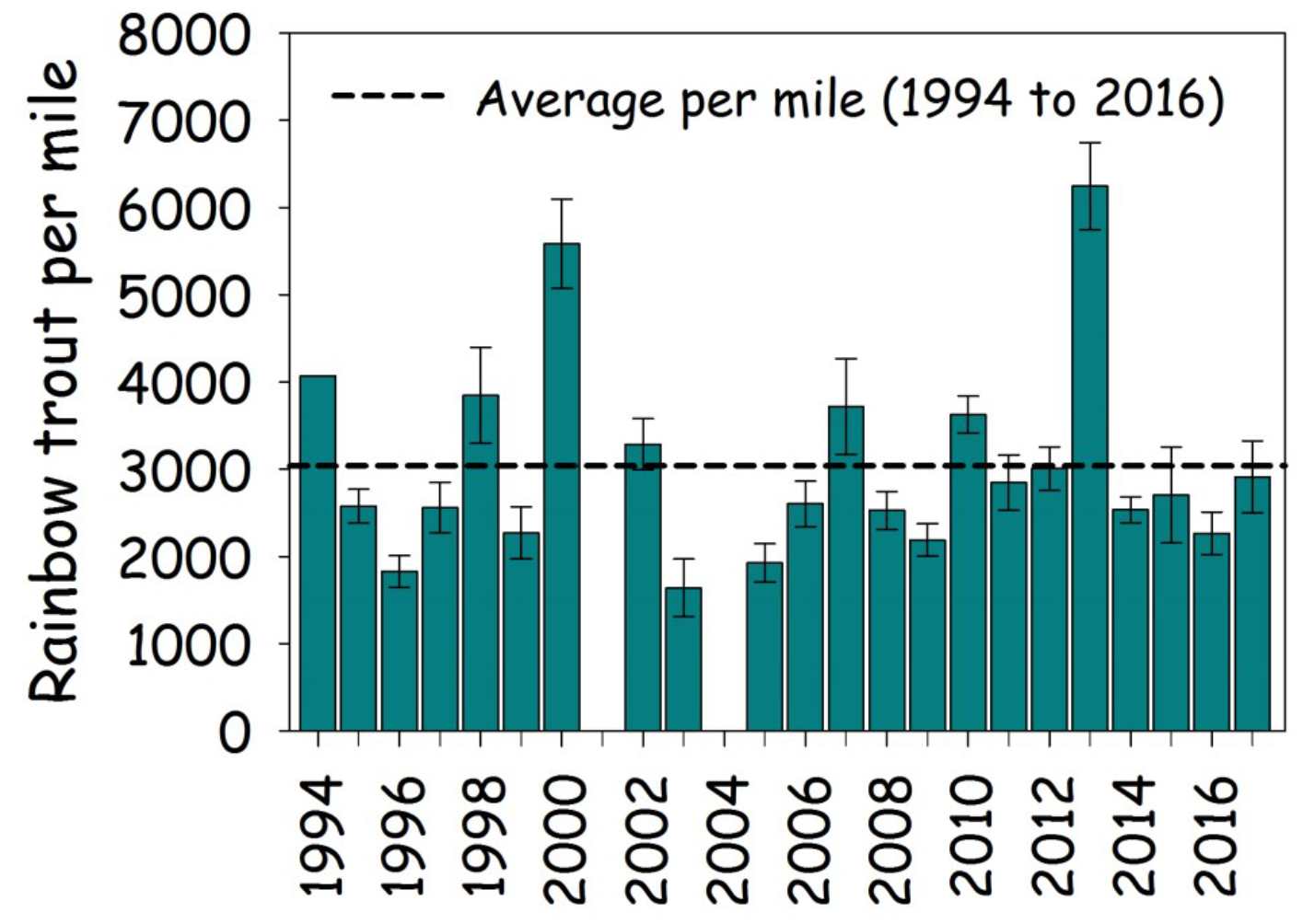 Figure 1. Rainbow Trout per square mile in the Box Canyon reach of the Henry’s Fork River, 1994 through 2017 (figure credit, IDFG). 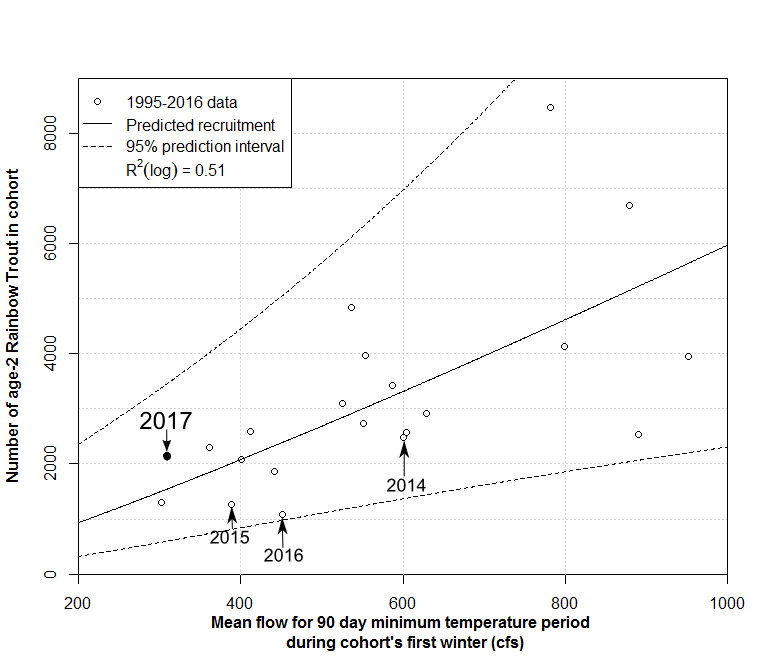 Figure 2. Mean flow from Island Park and Buffalo River during the coldest 90 day period during a cohorts first winter verse the number of age-2 Rainbow Trout in the cohort.

This “mis-estimation” isn’t uncommon when modeling natural systems. Unlike laboratory or hatchery settings where environmental conditions can be regulated and controlled, there are variables that can’t be accounted for in natural systems that lead to noise in the model estimates. Some years this noise leads to overestimating abundances (e.g. 2014, 2015, and 2016), and other years it underestimates abundances (e.g. 2017). Over the long run these overestimations and underestimations will average out if they are caused by random processes. Regardless, the 2017 abundance estimate was well within our error bounds and we welcome the surprise of slightly higher than predicted abundances.

The 2017 size structure is encouraging in that we have a fairly uniform distribution of various size fish. While we all love to catch big fish, it is important that we have good abundances in younger cohorts because they will eventually grow into the 16+ inch fish that anglers are looking to catch. A good example of what can happen with a population when we don’t have this even distribution of sizes within the population can be seen in 2014. 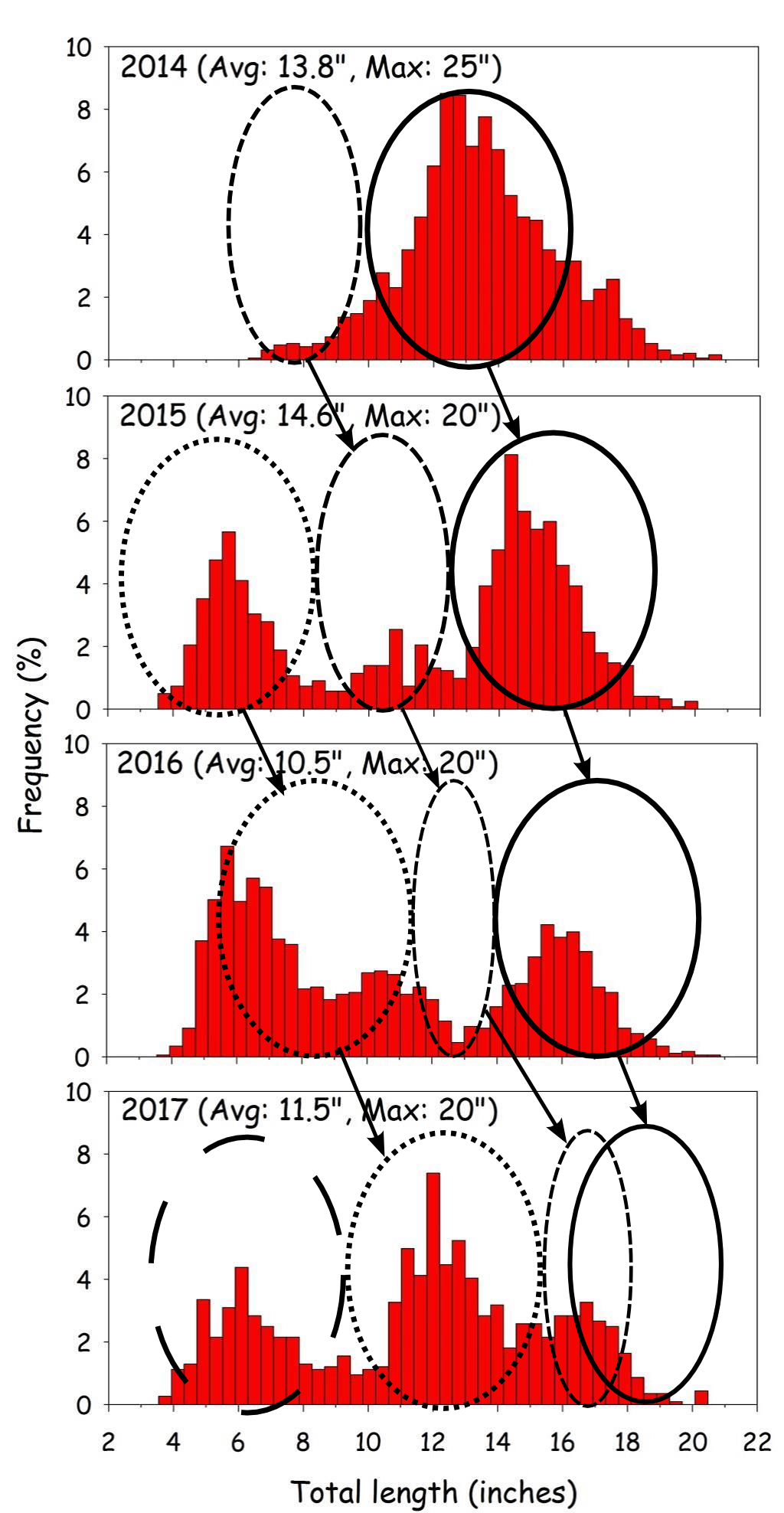 If you have questions, comments, or concerns, feel free to contact me at Bryce@henrysfork.org or 208-652-3567