Table below shows that the six mid- to high-elevation SnoTel sites in the watershed still have much more snow than is typical for this date. Some sites have more than twice median snow-water-equivalent (SWE) still on the ground and a higher percentage of the season peak remaining than in the median year. 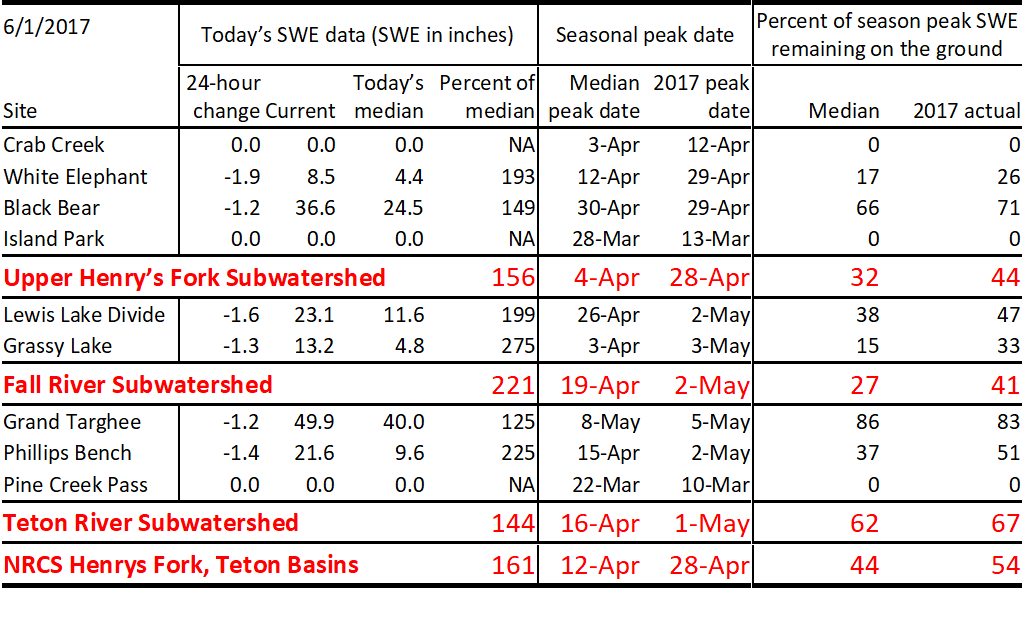 The table below compares June 1, 2017 SWE statistics to those in 2016 and to the long-term median. The Grand Targhee site is not included in the following three tables because of its short period of record. The dismal snowpack of 2016 is quite evident in this table; on June 1 of last year, only sites exceeding 8,000 feet in elevation had any snow left, and remaining amounts were well below median values. Snow remaining on the watershed this year is nearly twice the median for June 1.

May 2017: Dry, but Cool Enough to Preserve Snowpack

The table below shows that May turned out to be quite dry. Across the watershed, May precipitation was much less than half of the long-term mean and only half of last year’s May total, which may come as a surprise. May was the only bright spot in the very dry spring and summer of 2016. This year, May has been the driest month so far, relative to average. Averaged over the whole watershed, maximum May precipitation occurred in 1996, which was a very good water year all the way around.

May  was fairly close to average in temperature and equal to last year. Again, May was the only relatively cool, wet month during the spring and summer of 2016. In 2017, the near-average monthly temperature in May was acheived by averaging two very warm weeks with two very cold weeks. The cold weeks in the middle of the month slowed snowmelt substantially, preserving much of the healthy late-April snowpack all the way through the month, leading to the high June 1 snowpack referenced above.

Starting at the top of the watershed, inflow to Henry’s Lake reflects the warm-cool-warm temperature pattern. Inflow receded during the mid-month cold spell but has recently begun to increase toward its peak for the season as warmer weather has melted high-elevation snow. As a result, Henry’s Lake has been filling over the past few days and should reach capacity before the middle of June.

Inflow to Island Park Reservoir has also followed the warm-cool-warm temperature pattern and is currently around 850 cfs. Island Park Reservoir filled on June 1 and will remain full until irrigation delivery is needed, probably around July 1. Outflow from the reservoir will roughly match inflow, which is projected to recede gradually from its current value of 850 cfs to around 500 cfs by the end of June. Once irrigation delivery is needed, outflow will increase, probably eventually reaching 1000-1200 cfs in mid-July. 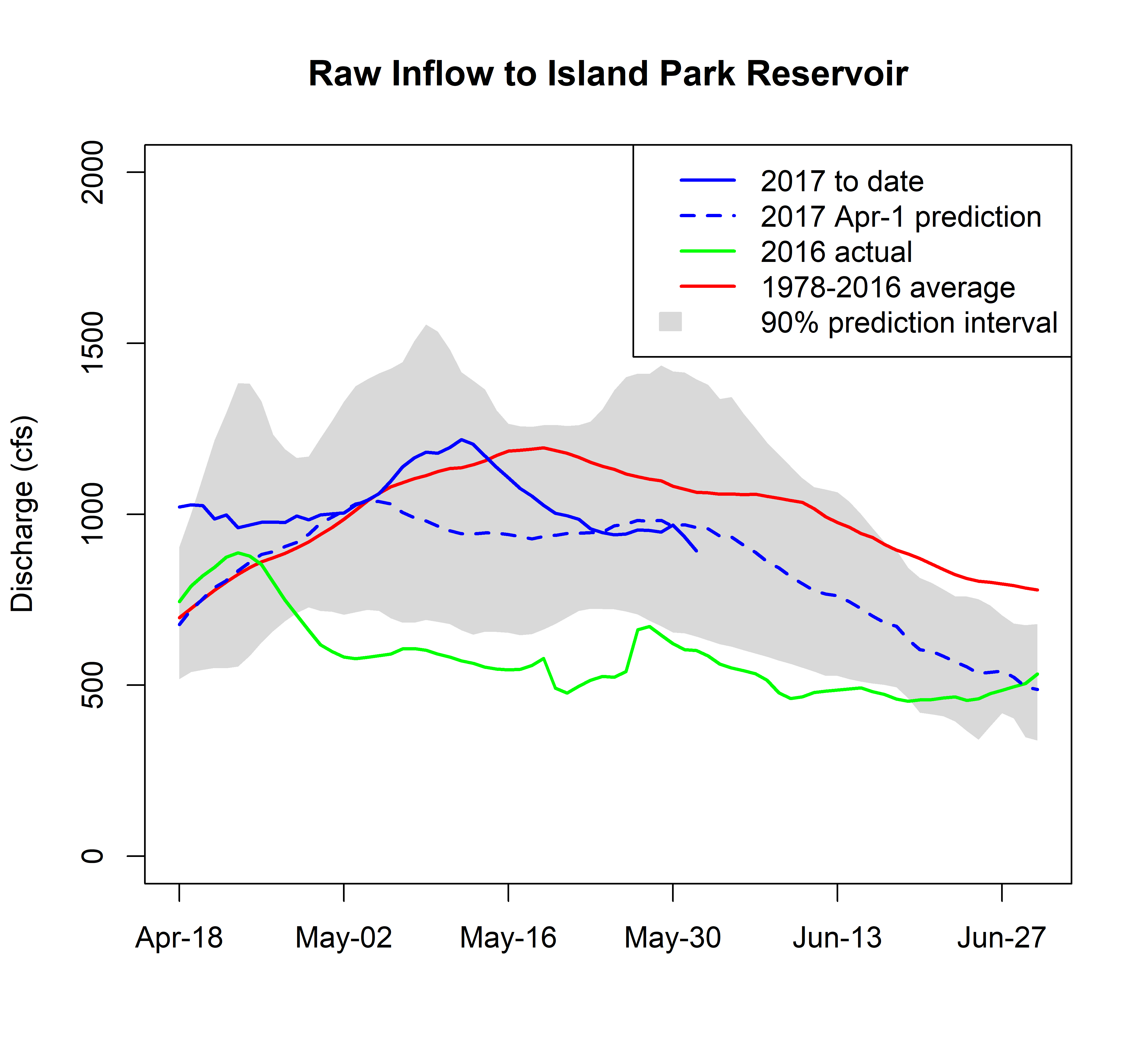 Fall River and Teton River are affected more strongly and directly by snowmelt than inflow to Island Park Reservoir, and both rivers clearly reflect warm temperatures and high snowmelt early in the month, followed by a period of cool temperatures and low snowmelt. The latest warm spell has increased snowmelt and will continue to increase flow in both rivers until they reach their respective final peaks for the season over the next two weeks. Given good soil moisture left from last October’s record rainfall, as well as good snow still remaining at high elevations, Fall River and Teton River are expected to meet irrigation demand in the lower Henry’s Fork watershed through the month of June. This means that no water will need to be delivered from Island Park Reservoir until early July. 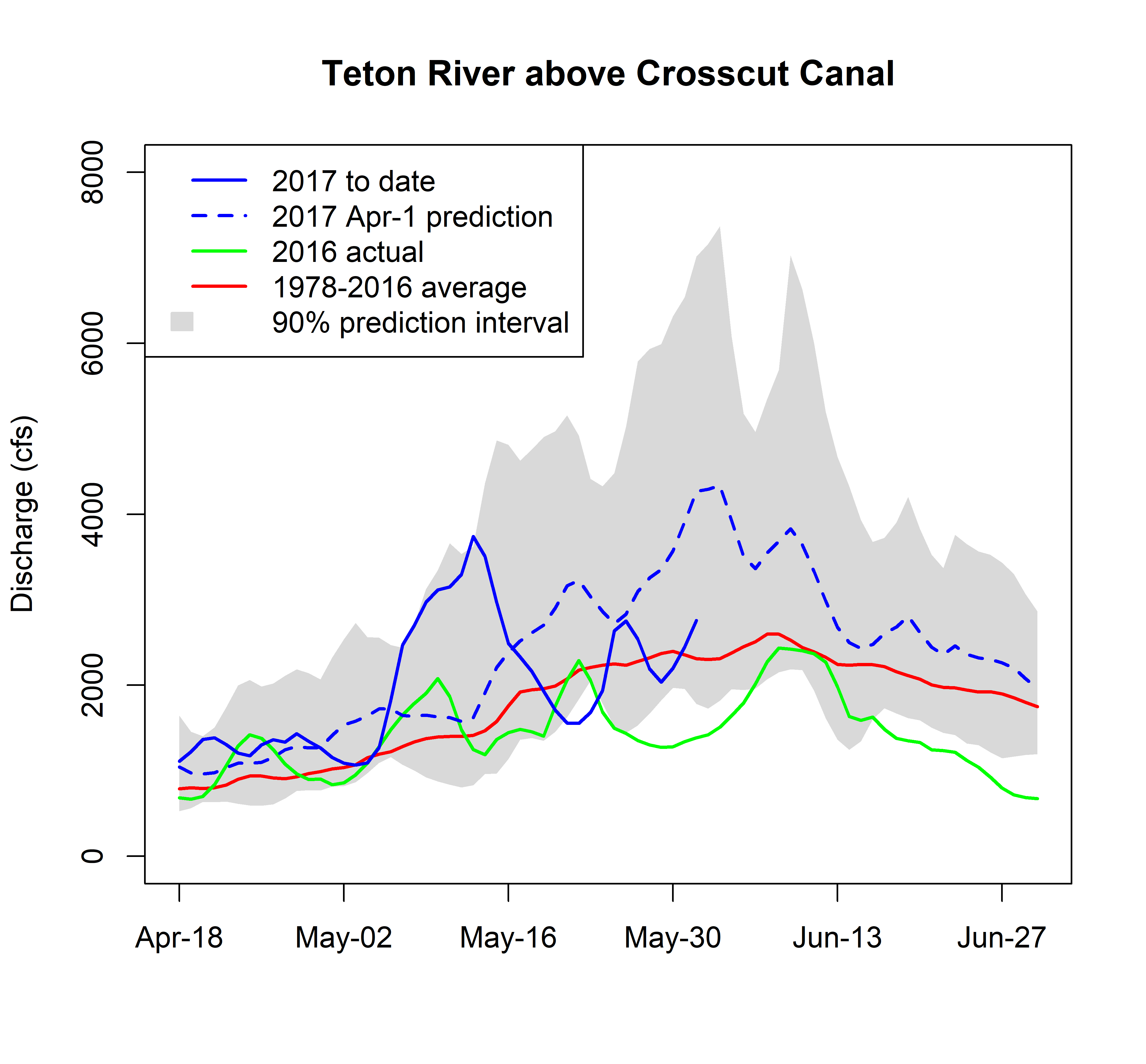