A three-day winter storm in the middle of the week set record cold temperatures for the date and greatly slowed snowmelt, saving that snow to melt later in the spring and summer. Elevations above 6,500 feet gained up to inch of new snow-water-equivalent this week, including the White Elephant site on the side of Mt. Sawtelle. As a result, current snowpack at the subwatershed scale is currently between 122% and 147% of median for the date. Although streamflow at most locations is below average this morning, warm temperatures forecast for the next 10 days will resume melt, leading to season-peak streamflows into Henry’s Lake and in Fall River and Teton River around June 1. Henry’s Lake and Island Park Reservoir will both fill around that time.

Cold temperatures and wet weather over the past week have greatly reduced snowmelt rates and even added new snow at most sites. As a result, snow-water-equivalent (SWE) as a percent of median for the date has increased rapidly, as can be seen in the graph below. 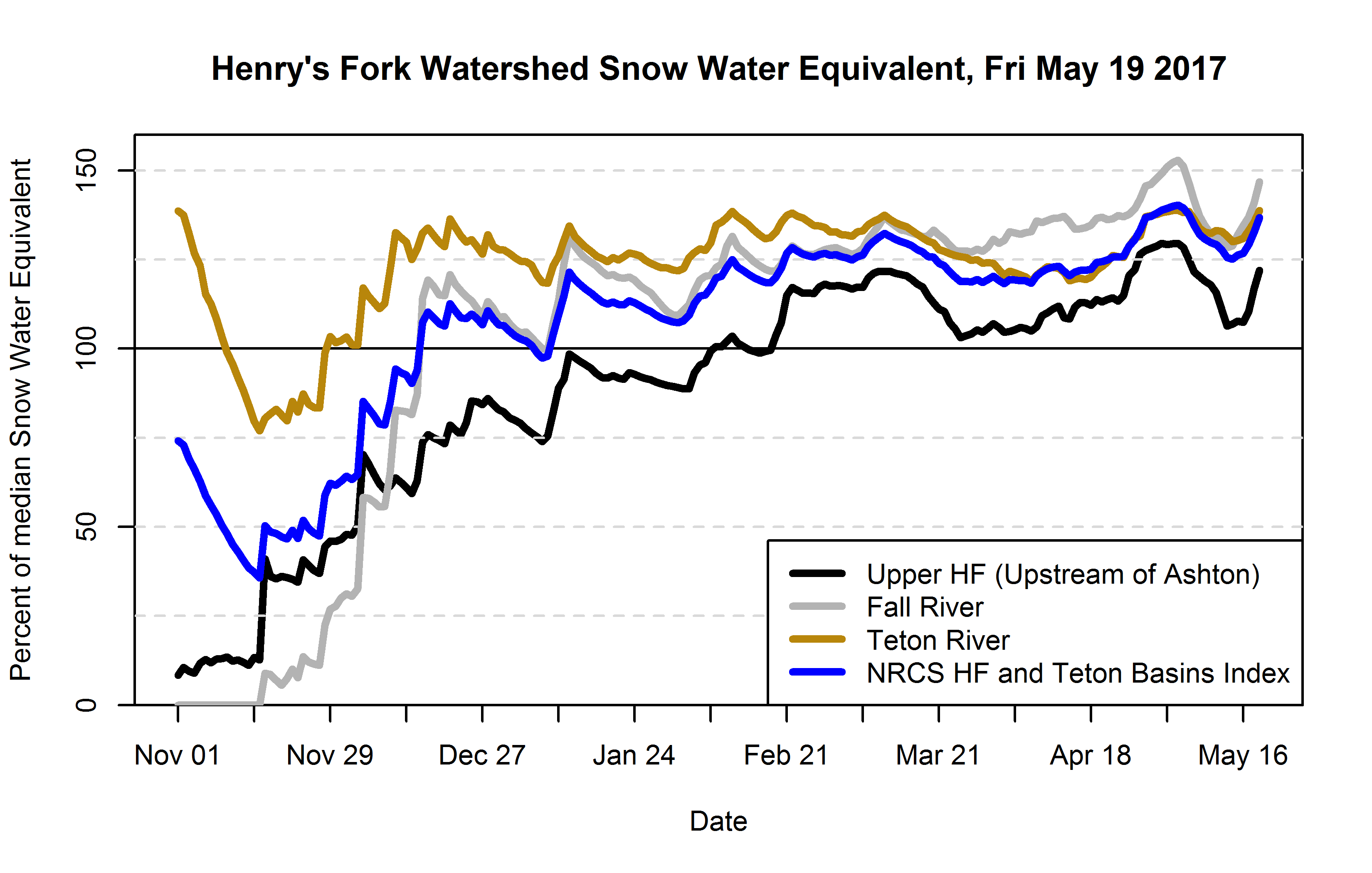 At the subwatershed scale, SWE on the ground this morning ranges from 122% of median in the upper Henry’s Fork to 147% in Fall River, as can be seen in the following table. Furthermore, as a percent of season-peak SWE, all subwatersheds are very near their medians. Remembering that these season peaks were well above median to begin with, this means that there is still a lot of snow left to melt, which will contribute to good streamflows throughout the watershed well into the summer. 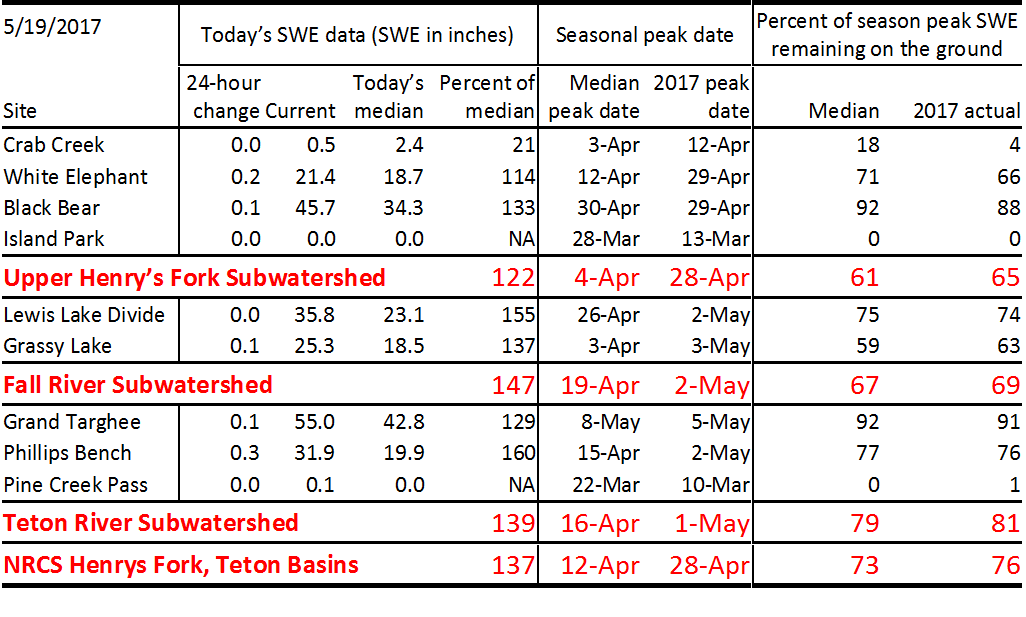 As can be seen in the graph below, inflow to Henry’s Lake has increased steadily over the past few weeks and is now above both long-term average and the prediction I made last month based on April 1 conditions (see April 21 blog). As weather warms and snowmelt increases again, inflow to Henry’s Lake will continue to increase, reaching a peak–and filling the lake–in early June. 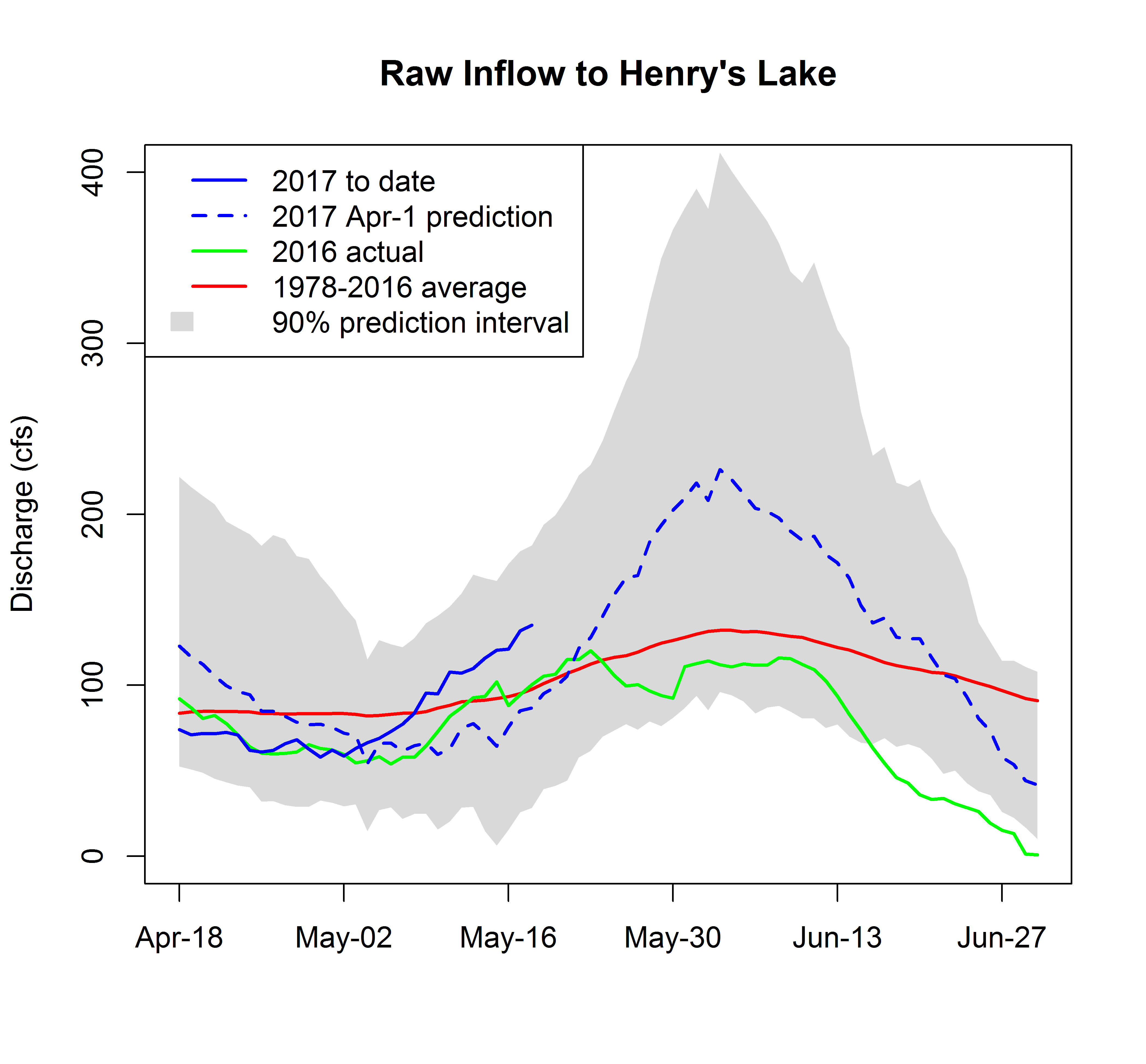 As can be seen in the graph below, inflow to Island Park Reservoir has dropped over the past week in response to decreased snowmelt and to loss of most snow at elevations below 7,000 feet in the Centennial Range. Nonetheless, the reservoir continues to fill, gaining an average of 422 acre-feet per day over the past 12 days. Inflow will increase over the next week as warm temperatures melt higher-elevation snow along the Centennial crest and the Yellowstone Plateau. At current outflow of 950 cfs, the reservoir will fill around June 1, although a modest decrease in outflow to around 750 cfs may be required to top it off. 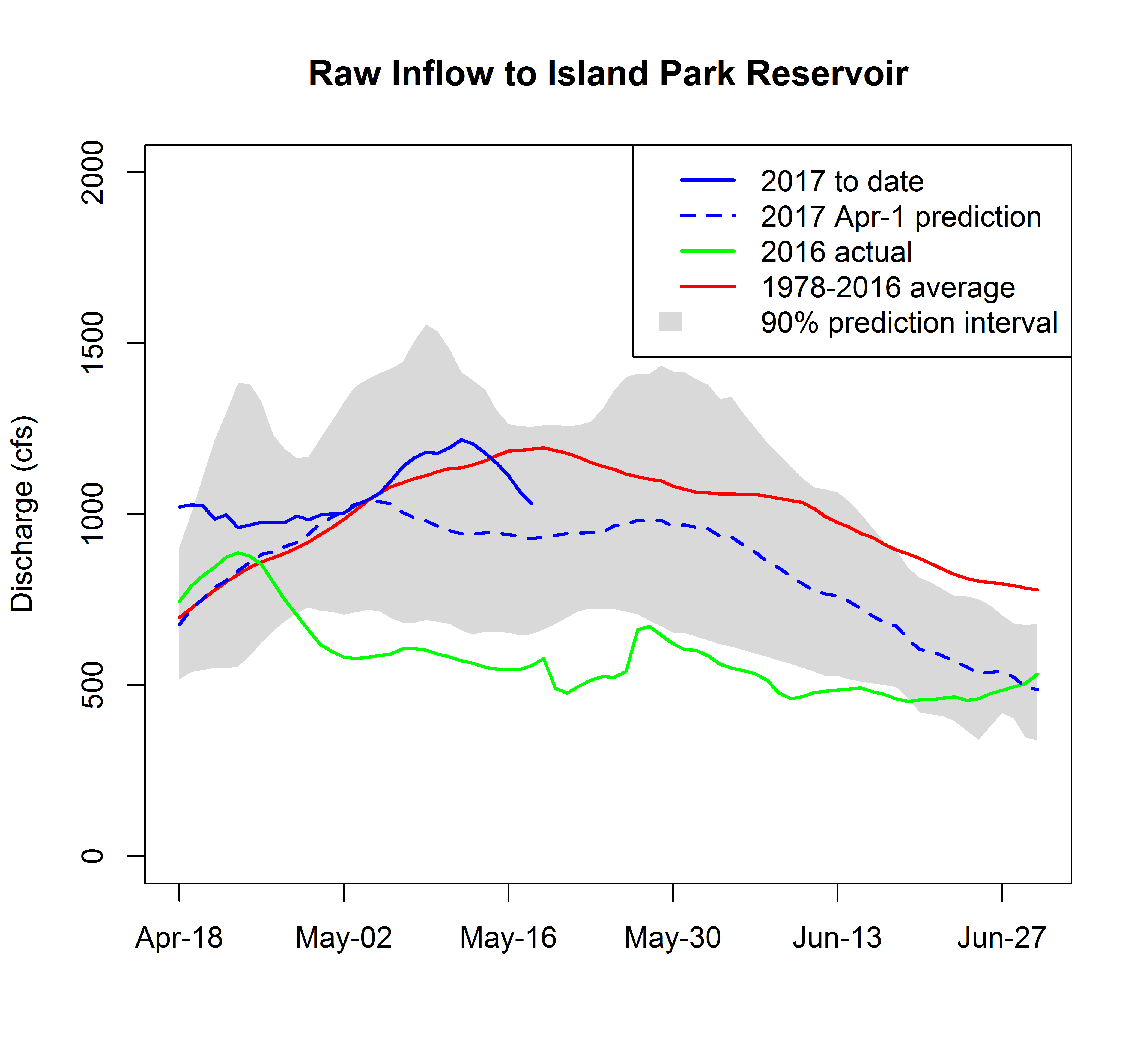 What About Water Quality?

In response to angler concerns over increased turbidity (decreased water clarity) in the Henry’s Fork downstream of Island Park Dam, HFF established a comprehensive water-quality monitoring program in the summer of 2013. We have now invested well over $300,000 in this program, which has been directed by Melissa Muradian since the summer of 2015. Four years of data have allowed us to develop a predictive model of water clarity in the river downstream of the dam (details in my prediction blog). To see how our model is working so far, we plotted our weekly turbidity measurements over the predictions, shown in the graph below. The results are promising–turbidity has remained low so far this spring and is very close to our predicted values. While we did not expect high turbidity at this time of year, the good model performance gives us confidence that our predictions for later in the summer will be accurate. In particular, we predict turbidity values much lower than the extremely high values we saw in 2016. We will add daily data from our automated instruments to this graph in the upcoming weeks and start providing more information on water quality as the summer arrives. 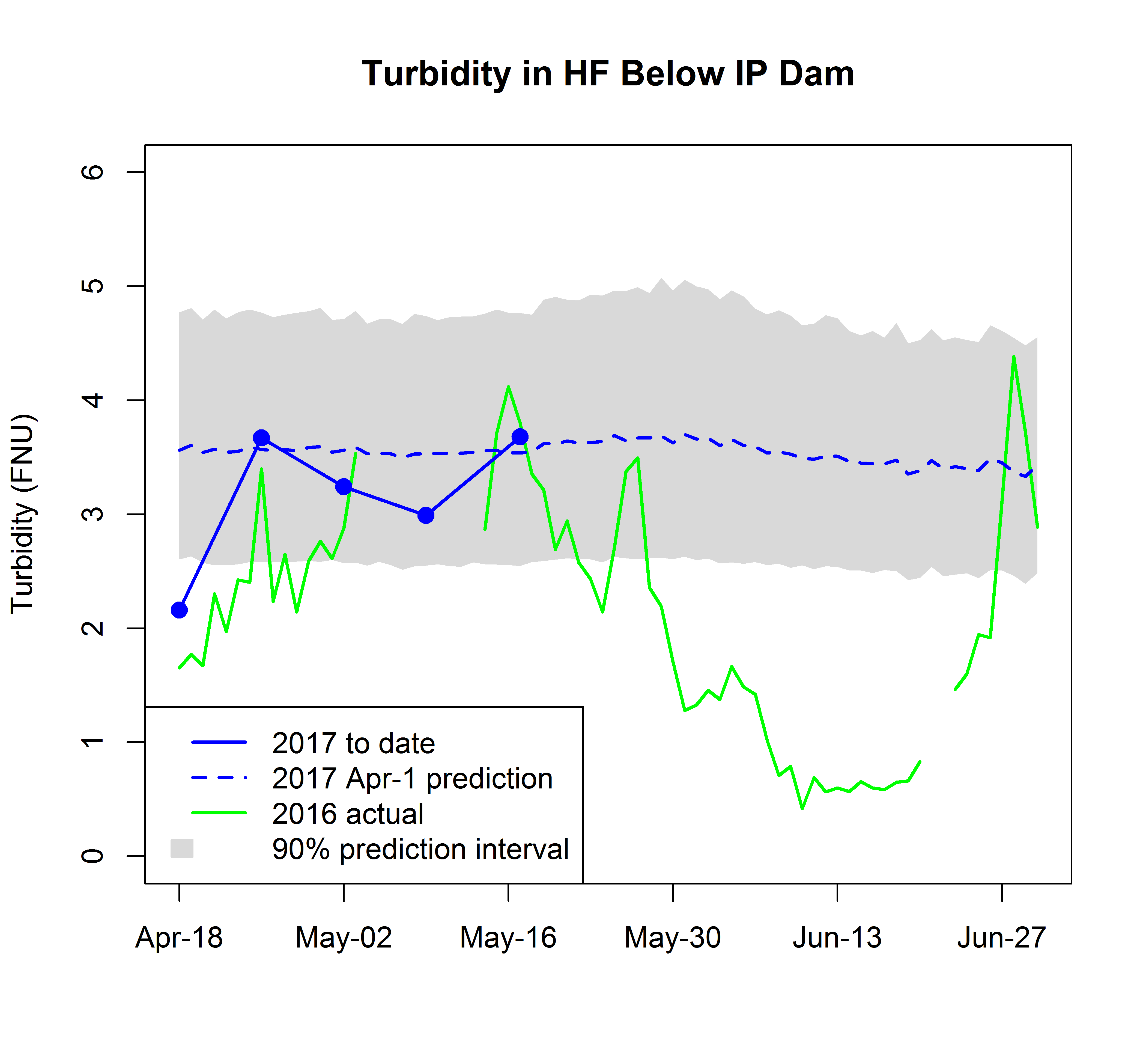