A well-above-average May snowpack has begun melting over the past week, resulting in above-average streamflow throught the watershed. Minimal amounts of water are being stored in the watershed’s reservoirs, and irrigation diversion is only around 20% of total water supply. As a result, streamflows are very near their natural values–essentially the same flow the rivers would have in absence of reservoirs and diversions. These high, natural flows–occurring within the range of long-term average timing–are currently benefitting physical and ecological processes in stream channels and riparian areas throughout the watershed, mobilizing and removing fine sediment from the stream bottom, creating new habitat, and ensuring reproduction of cottonwood trees. After four years of drought, the sight of snowmelt filling rivers and floodplains is a welcome change. 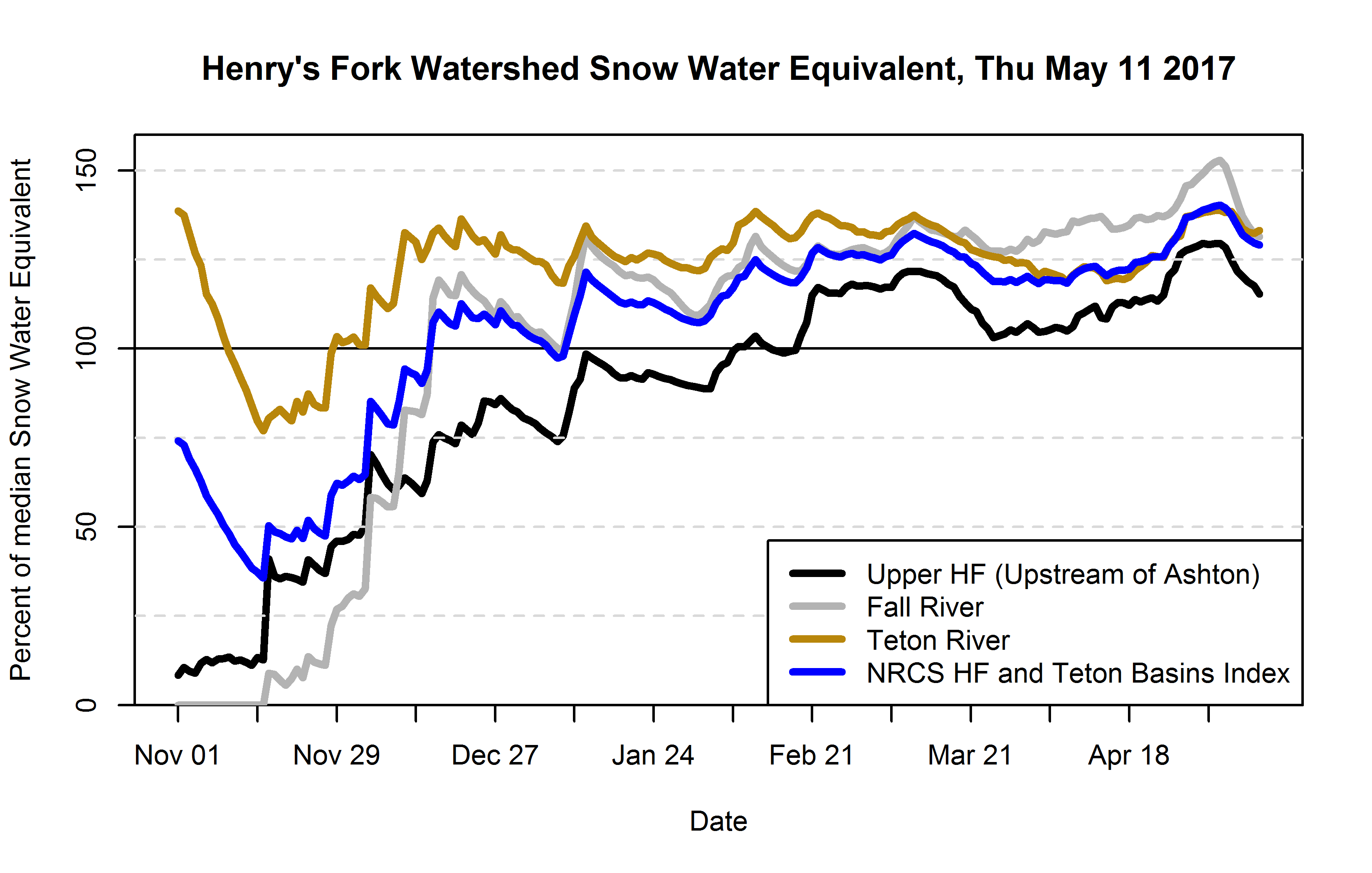 Graph above shows percent-of-median snow-water-equivalent (SWE) since November 1 in the three subwatersheds of the Henry’s Fork watershed. Also shown is the percent-of-median SWE for the Henry’s Fork and Teton Basins, as reported in the Natural Resources Conservation Service (NRCS) daily snow/precipitation report. Table below shows data for individual sites, as well as the subwatersheds and the NRCS Henry’s Fork and Teton Basins index.

Rapid melt over the past week has decreased SWE as percent of median, as you can see from the graph above. However, May 1 SWE was well-above median across the watershed, so actual SWE  on the ground is still well above median values at the high-elevation sites and at the subwatershed scale. In addition, as a percent of seasonal peak, SWE on the ground across the watershed is very close to median values for the date, meaning that melt is occurring roughly at its average timing. The Pine Creek Pass and Island Park sites lost all of their snow earlier this week, but only a few days earlier than median date of complete snow loss at those sites. 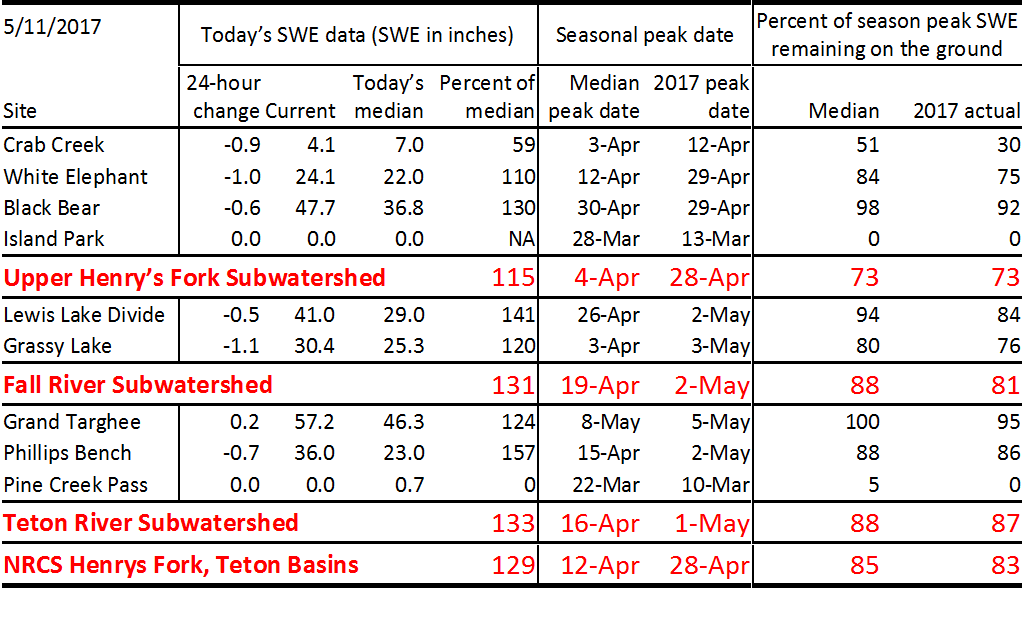 How is Snowmelt Affecting Streamflow?

As you might expect, the healthy snowmelt rates are maintaining high streamflows throughout the watershed. Relatively small amounts of water are currently being stored in the watershed’s reservoirs, and irrigation diversion is only around 20% of total water supply. As a result, streamflows are very near their natural values–essentially the same flow the rivers would have in absence of reservoirs and diversions. These high, natural flows–occurring within the range of long-term average timing–are currently benefitting physical and ecological processes in stream channels and riparian areas throughout the watershed.

One of the most important functions of high flows is mobilization of fine sediment accumulated on the stream bottom. High flows move larger gravel and cobble, freeing finer material, suspending it in the water column, and transporting it downstream. When streamflow reaches what is known as bankfull discharge–the flow at which water begins to flow over the tops of the streambank and onto the floodplain–this fine sediment is deposited along stream margins and on the flooplain itself. This new bed of rich soil provides optimal conditions for germination of seeds of cottonwood trees and other woody riparin vegetation, ensuring future wildlife habitat along the river. Meanwhile, older trees are washed into the river by high flows, creating new habitat structure in the channel for fish and insects. After four years of drought, we are delighted to see the sight of roily snowmelt filling our streams and rivers, driving the important processes that keep streams–and everything that lives in or near them–healthy.

The series of graphs below shows current streamflow to date at major points in the watershed:

Each graph shows actual streamflow since April 18 (solid blue), 1978-2016 average (red), 2016 (green), and my prediction for 2017 (dashed blue). The gray shaded area indicates the range of 2017 flow values that are possible with 90% probability. Full details on how these predictions were made are given in a previous blog. 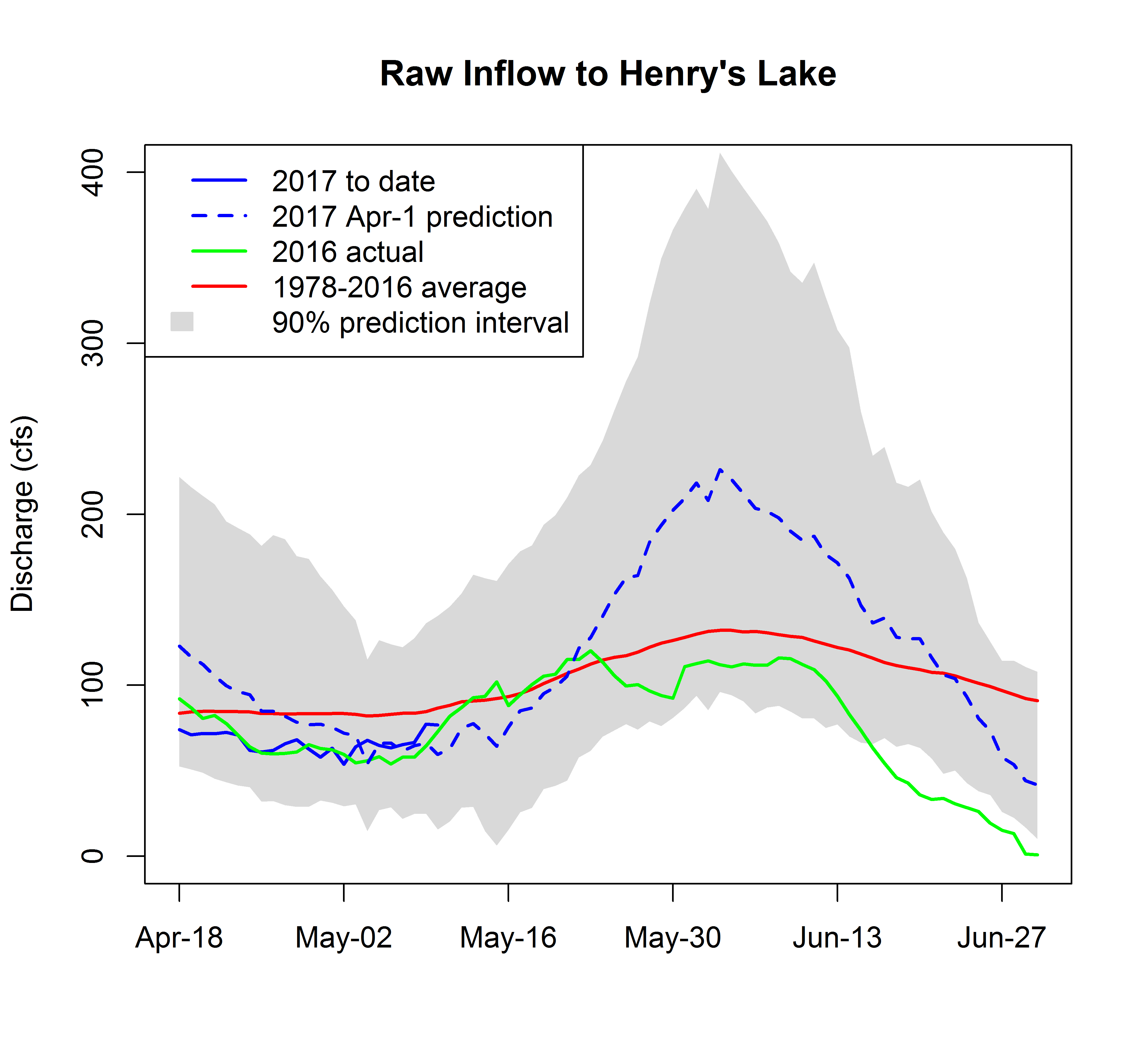 The graphs show that streamflow is currently above average at all locations except Henry’s Lake, where snow in the high-elevation mountains surrounding the lake is just starting to result in increased inflow. Currently, inflow to Henry’s Lake remains very close to long-term average, my early-April prediction, and last year’s value. Given the large amount of snow still to melt in the mountains above Henry’s Lake and the model predictions, inflow to Henry’s Lake will increase over the next few weeks to its seasonal peak. 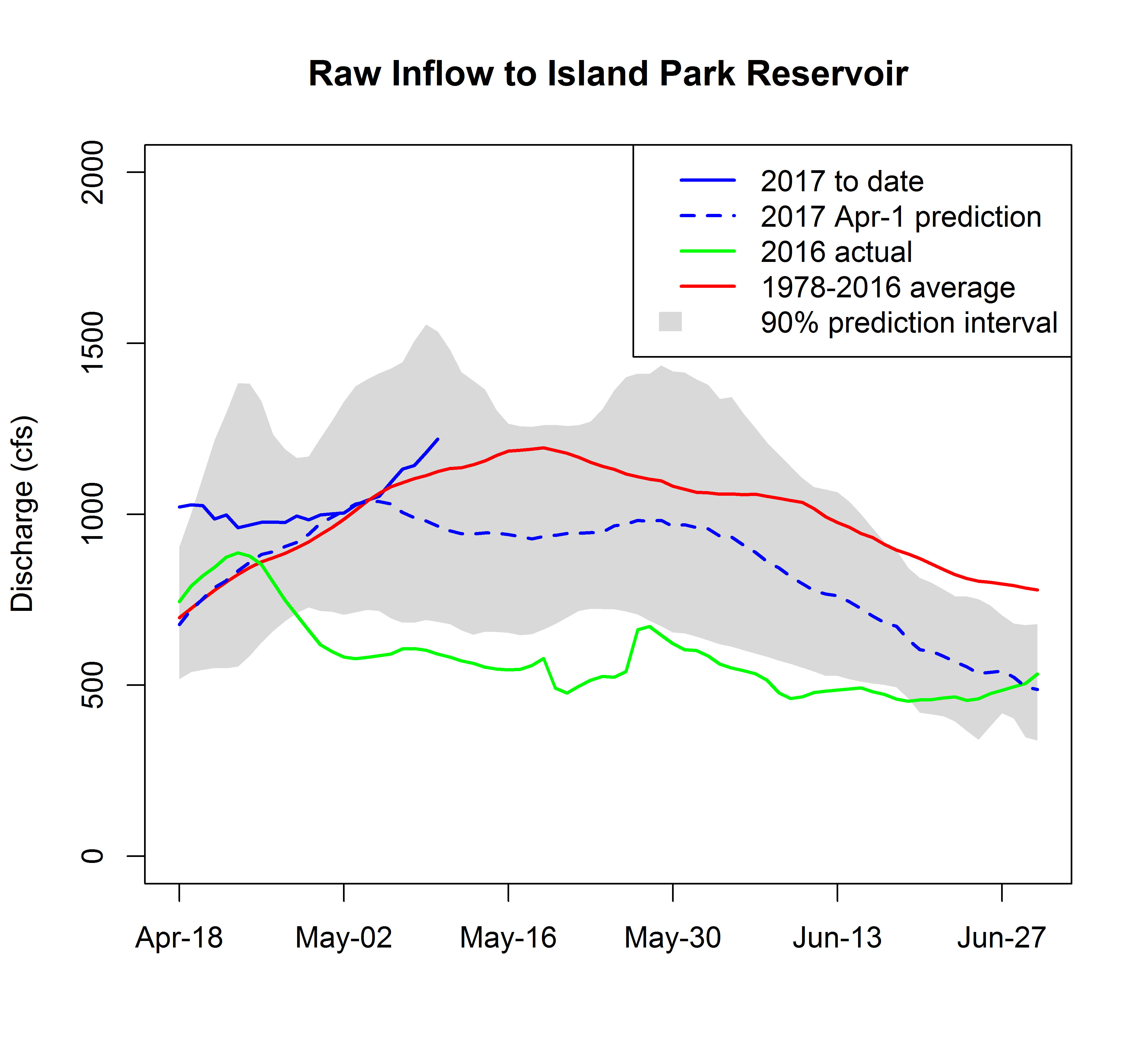 Inflow to Island Park Reservoir has increased steadily over the past week and is currently above average, my predicted value, and last year’s value. Nonetheless, it remains in the 90% prediction interval, reflecting the predictive model’s ability to account for factors such as the very wet spell at the end of April, unknown at the time I made the predictions. Outflow from Island Park is around 920 cfs, about 300 cfs below inflow and near the long-term average. This difference is filling the reservoir at a moderate rate; the reservoir is expected to fill around May 20. Inflow to Island Park will probably peak within the next 10 days, barring a major rainstorm later in the spring. 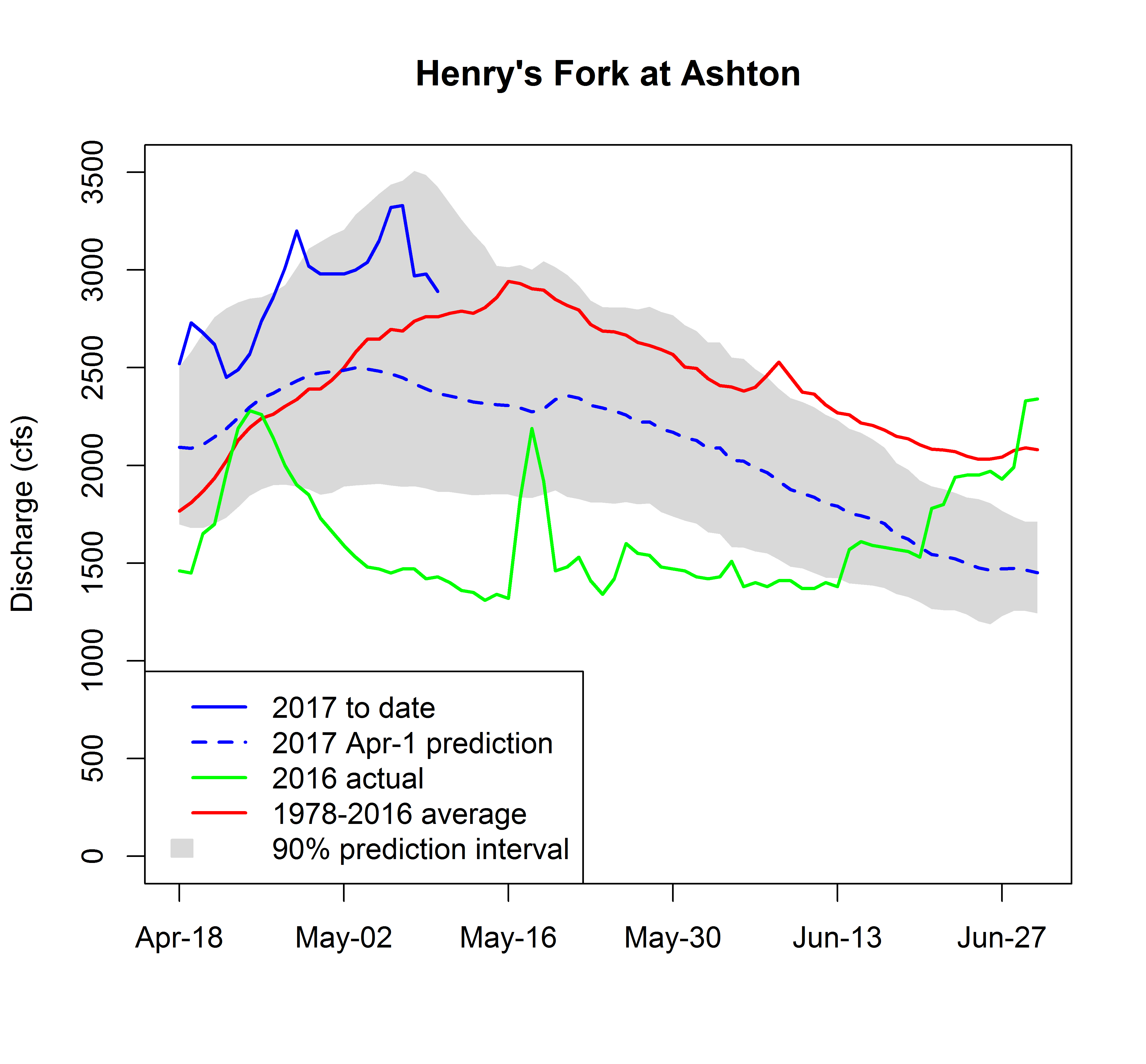 Streamflow at Ashton is also above average, above its predicted value, and above last year’s value, but well within the 90% prediction interval, after spending a few days above the interval in late April. Streamflow at Ashton has decreased over the past few days, as most of the snow at low- and mid-elevations in the watershed upstream has already melted. The predictive model suggests that streamflow at Ashton is currently near its seasonal peak and will probably not increase substantially from its current value unless the watershed receives a large amount of rain or until a large increase is made in outflow from Island Park Reservoir. 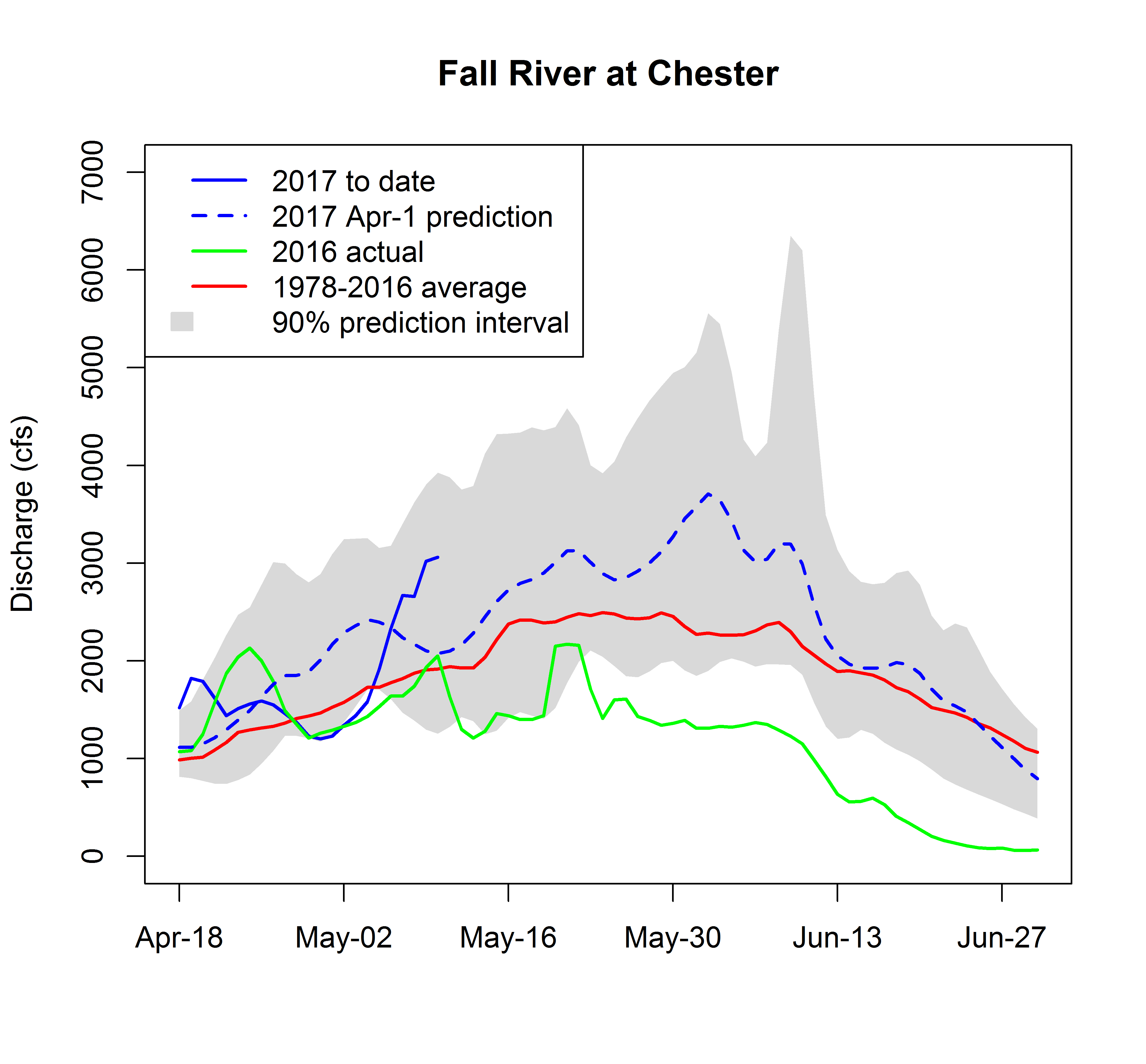 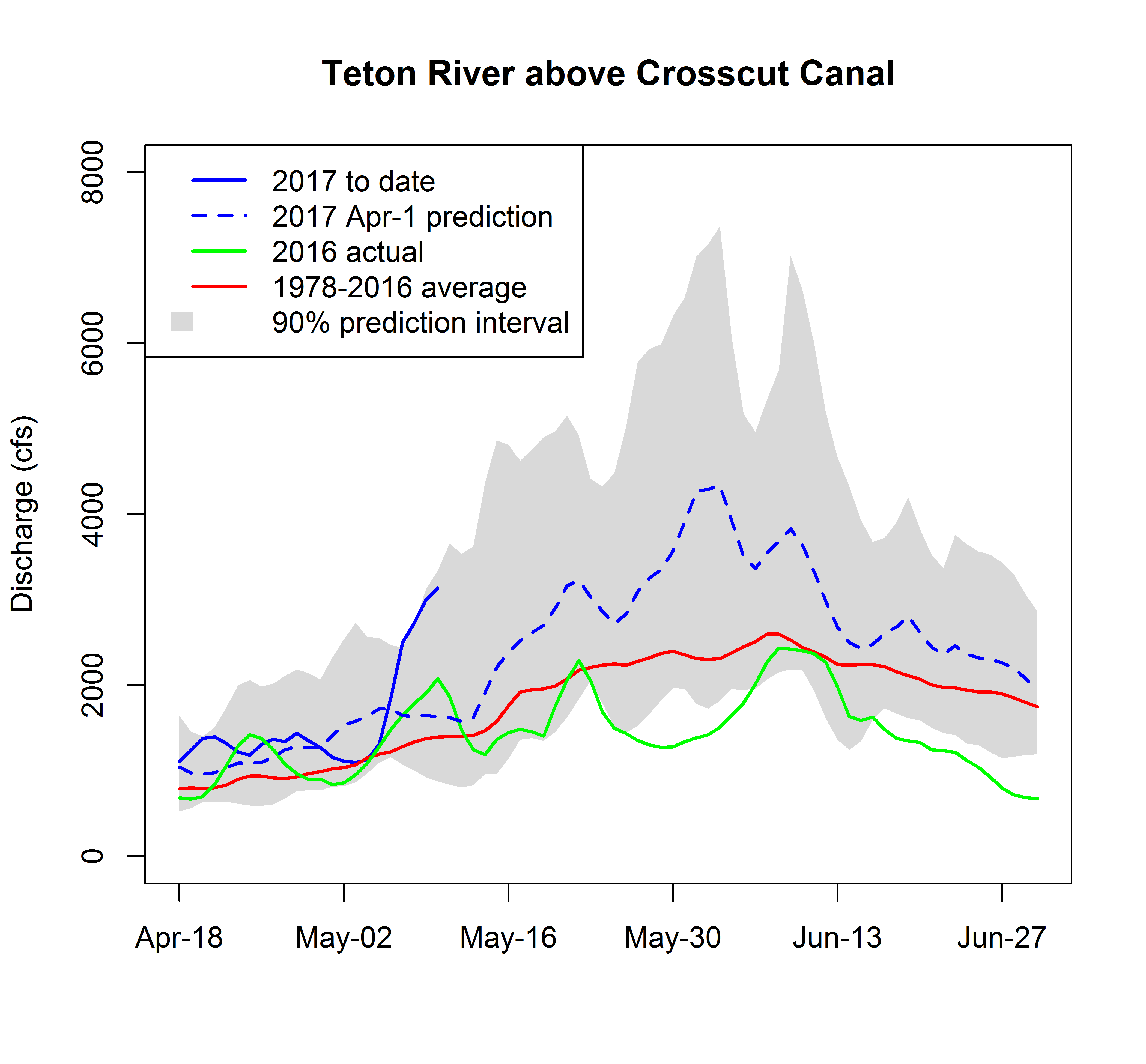 The Fall River and Teton River graphs look very similar, reflecting melt of similar amounts of snow at mid- and high elevations in both watersheds. Streamflow in both rivers was close to long-term averages, last year’s values, and predicted values two weeks ago, when the weather was cool and snow was still accumulating. Since arrival of warm weather about 10 days ago, streamflow in both streams has increased very rapidly, currently exceeding average and predicted values. In both cases, streamflow is very close to the top of the 90% prediction interval, meaning that these high flows had a fairly low chance of occurring based on early-April conditions, when the predictions were made. Cool weather forecast to arrive over the next day or two will slow melt and decrease streamflow in Fall River and Teton River, but the predictions suggest that it will increase again to reach seasonal peaks sometime around June 1.