With a very wet April now in the books, the 2017 water year is certain to be above average in terms of water supply in both the Henry’s Fork watershed and in the upper Snake River basin as a whole. Highlights are: 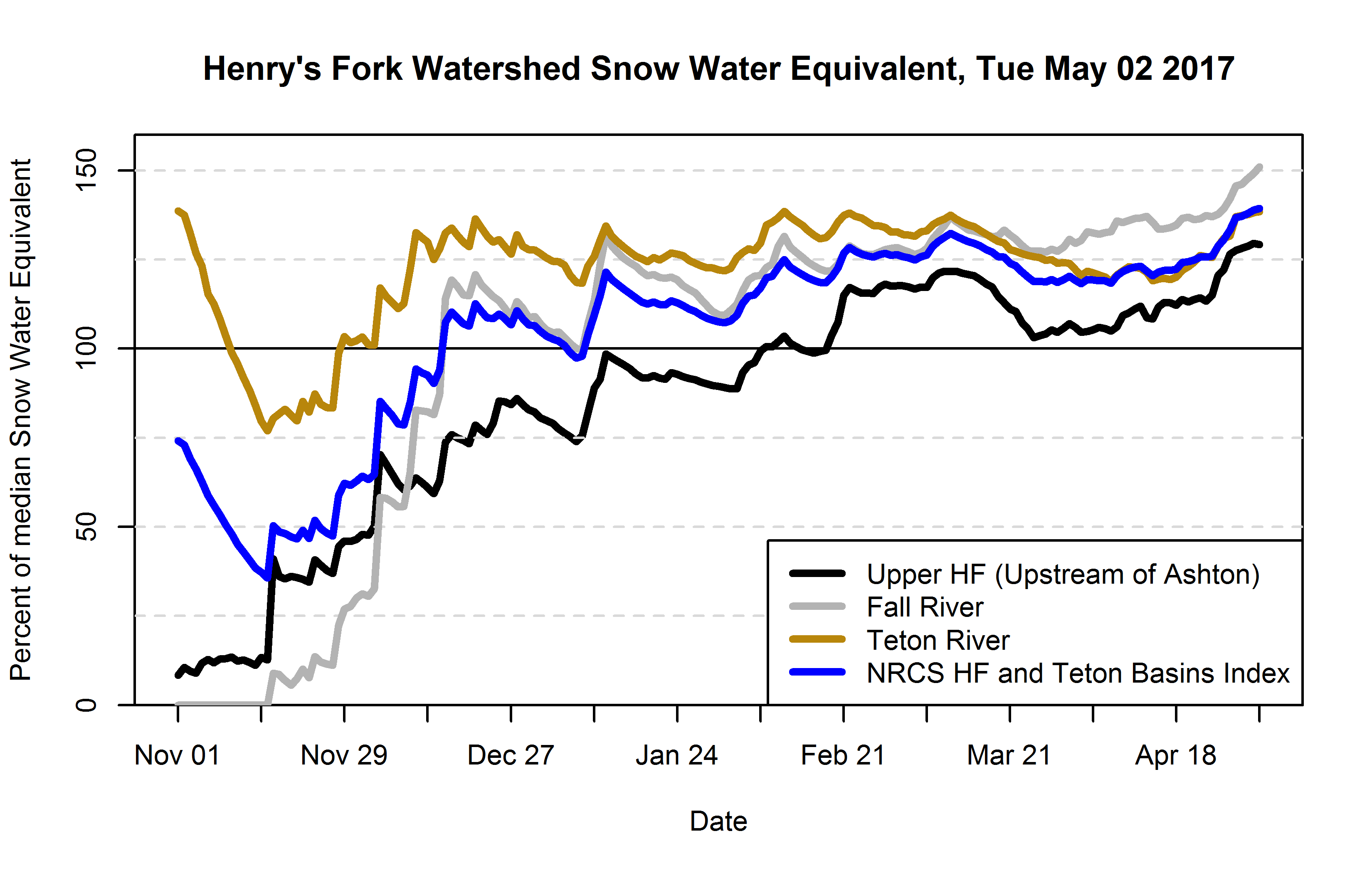 Graph above shows percent-of-median snow-water-equivalent (SWE) since November 1 in the three subwatersheds of the Henry’s Fork watershed. Also shown is the percent-of-median SWE for the Henry’s Fork and Teton Basins, as reported in the Natural Resources Conservation Service (NRCS) daily snow/precipitation report. Table below shows data for individual sites, as well as the subwatersheds and the NRCS Henry’s Fork and Teton Basins index. Extensive loss of snow at Island Park, Crab Creek and Pine Creek Pass during the middle of March greatly reduced the amount of snow on the ground on April 1, the traditional date of peak-snowpack measurement across the western U.S. However, as is clear from the graph above, SWE as a percent of median started to increase in late March, slowly at first and then very rapidly at the end of April. New snow accumulations at high elevations have now far outweighed early melt at low elevations, and watershed-wide SWE indices are now well above long-term medians. Even in absolute terms, peak accumulation of SWE so far this spring across the watershed has occurred within the last four days. 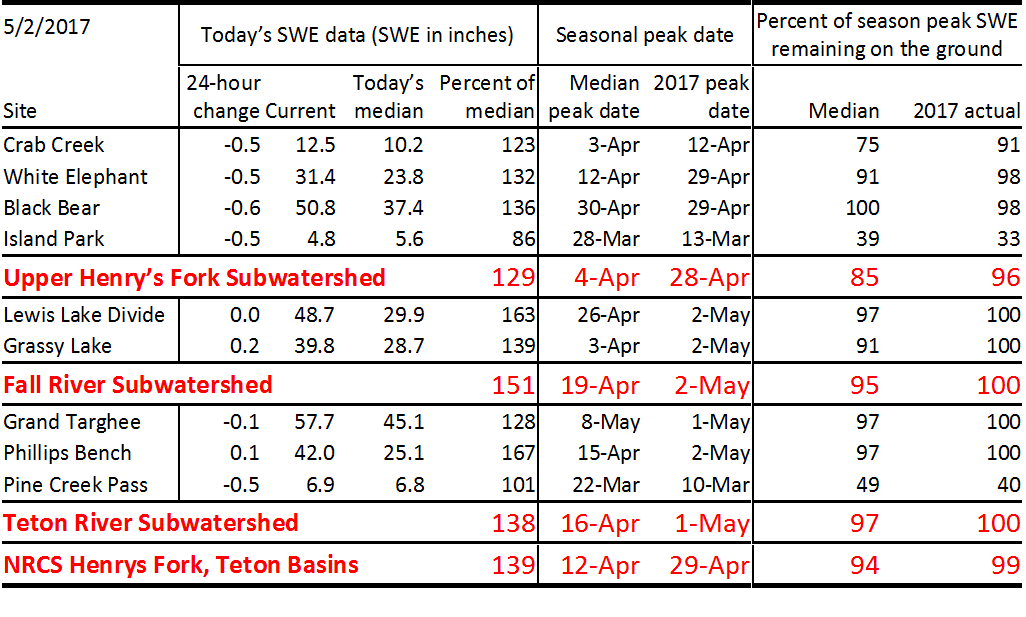 How good is the May 1 snowpack?

Although April 1 is usually closer to the date of peak SWE across the West (see my April 3 blog), this year’s extremely wet April moved the date of peak SWE accumulation in the Henry’s Fork watershed much closer to May 1. The table below shows data from the eight SnoTel sites with long periods of record and is organized by elevation (the Grand Targhee site is excluded because of a short record). Watershed mean SWE on May 1, 2017 was 46% greater than the 1981-2010 median and 2.3 times greater than last year’s May 1 value. The most striking comparisons are at the three low-elevation sites, which essentially had no snow on the ground last year at the beginning of May, compared with between 5 and 13 inches of water-equivalent this year. This is even more remarkable, considering that those sites lost much of their SWE during March and early April (see my warning about early melt back in March).

Well, that depends on what is used as the basis for comparison–the “new normal” phenomenon. The table below compares April 2017 mean temperatures to 1989-2016 means and extremes. While not anywhere close to 2016’s record high temperature, mean April temperature in 2017 was still slightly above the 1989-2016 average, consistent with the 30-year trend of steadily increasing springtime temperatures (see my climate blog). Across individual sites, temperature records were set in 2004, 2012, and 2016, and the watershed average high was set in 2016, at 39.3°F. This year’s watershed average was 35.0°F, compared with the 1989-2016 average of 34.5°F. Mean temperature in April 2017 was slightly below average at White Elephant and Lewis Lake Divide but above average at the other six sites.

Those of you who live in the watershed may have trouble believing that April was actually warmer than average, but aside from the “new normal” phenomenon of steady upward creep in springtime temperatures, April seemed colder than it actually was because the steady stream of moisture kept nighttime lows higher than they would be under clear skies. This kept the daily mean temperature a little higher than the chilly afternoon highs would indicate.

The information presented above is specific to the Henry’s Fork watershed and certainly provides optimism for that 2017 will be a year of good water supply for all resources. However, the Henry’s Fork reservoir and irrigation system is not operated in a vacuum–it is part of the upper Snake River system, which extends from the headwaters (including the Henry’s Fork) downstream to King Hill (just downstream of Hagerman, Idaho, in the Magic Valley). The downstream-most point of diversion from the main Snake River is Milner Dam, near Burley. The Idaho State Water Plan sets a streamflow objective of 0 flow at Milner, with the intent of storing, using, or recharging the Eastern Snake Plain Aquifer with every drop of water available in the Snake River upstream of Milner Dam.

The table below shows April 30 conditions in the upper Snake River system in 2016 and 2017, in comparison to 1988-2014 means. Natural flow is the streamflow that would be present in the Snake River at Milner in absence of storage reservoirs and diversion for irrigation and managed aquifer recharge. April 30 flow this year was 171% of average and 130% of last year’s value. The 2016 value is somewhat misleading–yes, it is above the long-term average, but it was above average only because of very early melt of the mediocre snowpack the basin received in 2016. By late summer, natural flow in the upper Snake River was well below average. This year’s very high April 30 natural-flow value occurred at the end of a very cool week, when snowmelt was relatively low. The above-average May 1 SWE values shown above for the Henry’s Fork are similar to those basin-wide. Thus, the higher 2017 streamflow value reflects much better water conditions overall as a result of above-average precipitation that started last October and has continued all winter and spring.

Total system diversion is below average and well below last year’s value, indicating cool, wet conditions across the basin. Planting of crops has been delayed throughout the basin, particularly in the Magic Valley, which received a very large amount of precipitation through the winter and spring. Even crops that have been planted have not needed much irrigation due to recent rain. Finaly, the system outflow, shown in the last column, gives the best measure of water supply relative to demand. With a few exceptions, actual streamflow at Milner Dam represents natural flow in excess of what can be stored in the reservoir system or diverted for irrigation or managed aquifer recharge. Last year, flow at Milner was 0, because demand exceeded supply. The reservoir system only filled to 85% capacity last year. Average excess on April 30 is only 2,658 cfs, and this represents water released from the storage system in the spring to create reservoir space to capture spring runoff. This year, April 1 system excess is 15,105 cfs, 5.7 times greater than the average. The reservoir storage system has actually been held fairly constant over the past five weeks, which is why system outflow at Milner plus total diversion is pretty close to the total available natural flow right now–relatively little water is being stored in or released from the reservoir system. The space available in the reservoir system right now is what is expected to be necessary to capture snowmelt over the remainder of the spring, assuming that irrigation diversions will increase over the next few weeks to more average values.

Weather forecasts ranging from weekly to seasonal all call for above-average temperatures and above-average precipitation. Over the next two months, these conditions will increase snowmelt and continue to add additional water to the system. Streamflows will increase later this week and continue to do so for the next month, depending on watershed elevation. Peak runoff will occur in most basins at average to slightly-earlier-than-average timing, and magnitudes will exceed long-term averages. The reservoir system will fill, most likely during June. The big unknown is what fraction of irrigation demand will be met by continued spring and summer precipitation. If the spring and summer is as wet as 2011, natural streamflow and precipitaion will meet irrigation demand all the way through the summer, leaving the reservoir system completely full at the end of the seaosn. At worst, a dry spring and summer will mean that some storage water will be needed to meet irrigation demand during July and August. My recent simulations suggest that at worst, Island Park Reservoir will end up with average carryover–about 43% full (compare that to last year’s 15% carryover). Average carryover in the entire upper Snake reservoir system is certainly a worst-case scenario at this point.

From a fishing standpoint, more “normal” temperatures, good streamflows, and a lot of snowmelt yet to come mean that hatches and conditions will be much more “normal” than they have been in many years.