Four weeks ago, water-supply outlook for the upper Henry’s Fork watershed was average at best because of an extended period of warm, dry weather in March that had already melted much of the low- and mid-elevation snowpack. However, April has turned out to be one of the wettest on record, greatly improving water supply and increasing the probability that relatively little Island Park Reservoir storage water will be needed to meet irrigation demand this summer. With three days left to go in the month, Island Park has received 4.5 inches of precipitation in April, compared with the 1981-2016 average of 2.3 inches and a maximum over that period of 4.2 inches in 1993. However, temperatures have remained above long-term averages throughout the month. 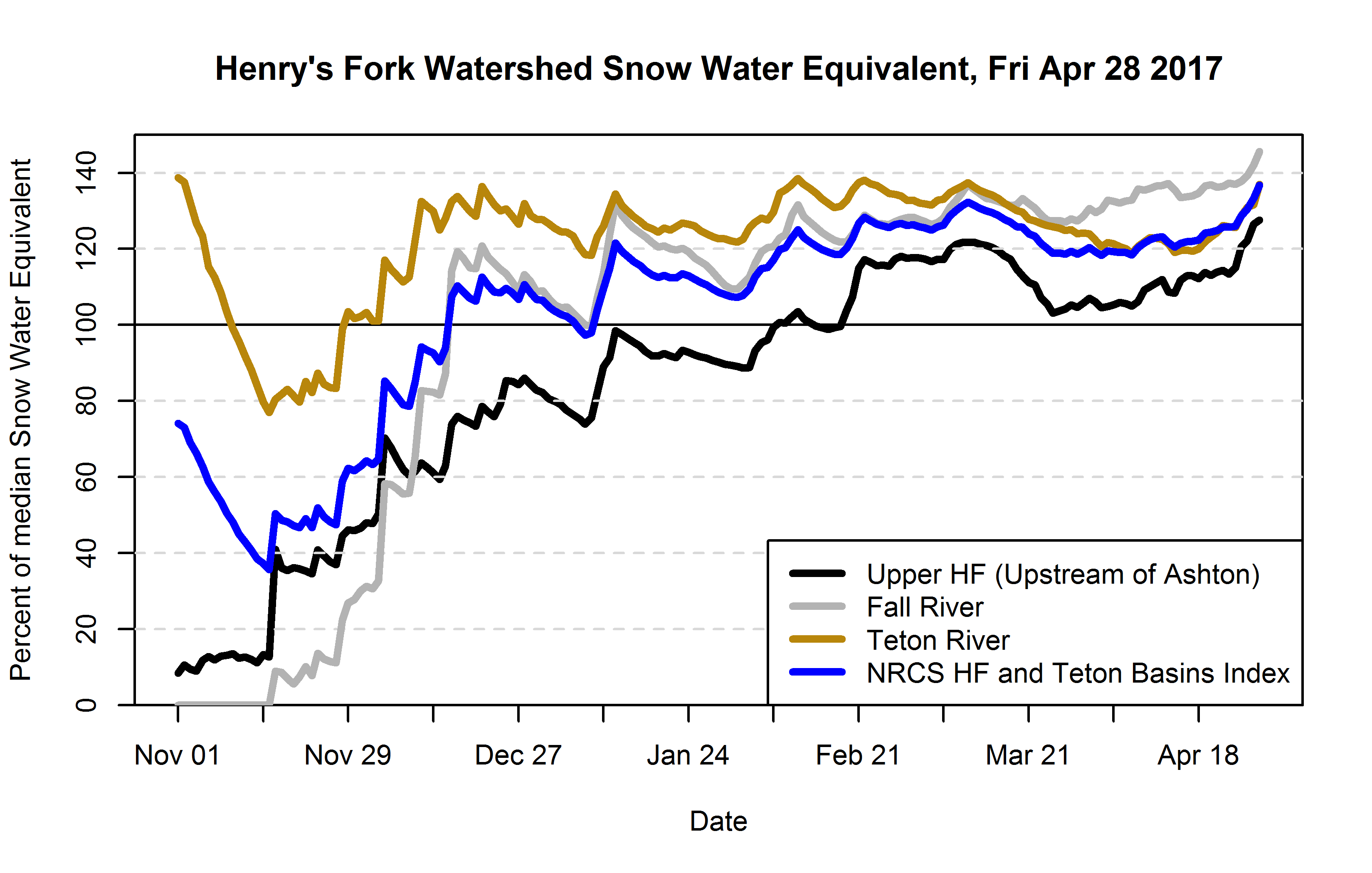 Graph above shows percent-of-median SWE since November 1 in the three subwatersheds of the Henry’s Fork watershed. Also shown is the percent-of-median SWE for the Henry’s Fork and Teton Basins, as reported in the Natural Resources Conservation Service (NRCS) daily snow/precipitation report. Table below shows data for individual sites, as well as the subwatersheds and the NRCS Henry’s Fork and Teton Basins index. Extensive loss of snow at Island Park, Crab Creek and Pine Creek Pass during the middle of March greatly reduced the amount of snow on the ground on April 1, the traditional date of peak-snowpack measurement across the western U.S. However, as is clear from the graph above, SWE as a percent of median started to increase in late March, slowly at first and then very rapidly over the past week. New snow accumulations at high elevations have now far outweighed early melt at low elevations, and watershed-wide SWE indices are now well above long-term medians. Even in absolute terms, there is more SWE on the ground today than on any day so far this winter or spring. Average SWE across the nine SnoTel sites shown in the table below was 29.5 inches on April 1 and 33.1 inches this morning (April 28). 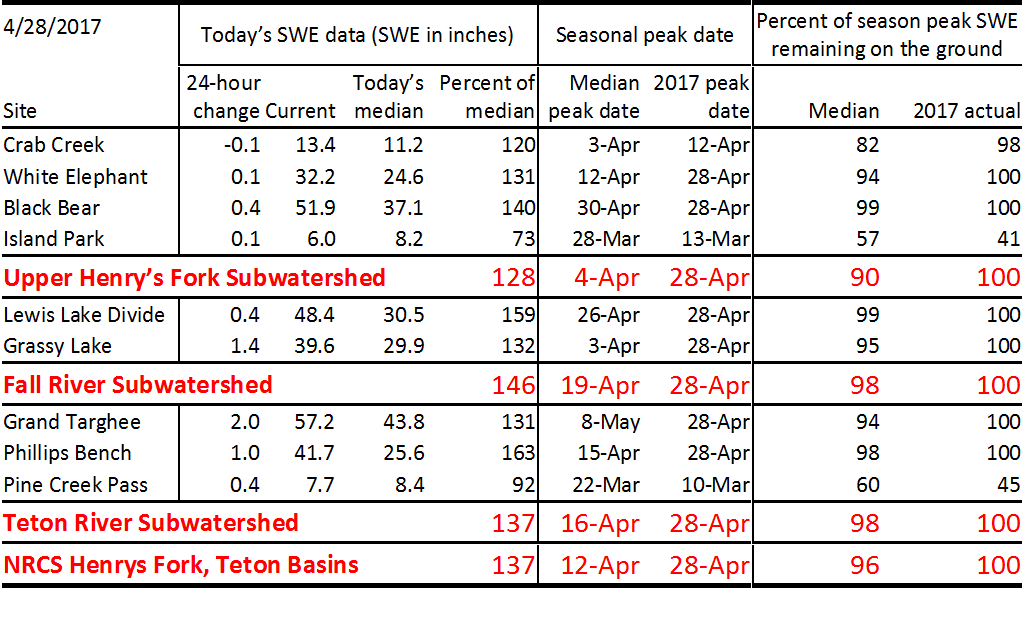 With three days left in the month, it looks like April will set some precipitation records but will still end up on the warm side. The Island Park SnoTel site has received 4.5 inches of precipitation in April, compared with the 1981-2016 average of 2.3 inches, last year’s value of 1.5 inches, and a maximum over that period of 4.2 inches in 1993. Mean precipitation for April over the long 1936-2016 period of record is 2.0 inches (see my climate blog for more analysis of the long-term record at Island Park). Even Ashton has received over 3 inches of precipitation so far this month. However, despite what has seemed to those of us who live here like very cool weather during April, the monthly mean temperature in Island Park so far this month has been 37.3 F, versus a mean of 36.1 F over the 1981-2016 period and a mean of 35.0 F over the long 1936-2016 period of record. In 2016, mean April temperature at the Island Park site was 39.2 F. So, the spring of 2017 so far has been cooler than last year but warmer than long-term averages, and much wetter.

This April has served as our annual reminder of just how much difference weather conditions during April can make on water-supply conditions. If the warm, dry conditions we saw in March had persisted through the month of April, irrigation demand would be high, and snow would be melting rapdily. My early-spring predictions of early runoff and mid-summer water shortages would have had a high chance of occurring. However, April has been extremely wet, preventing farmers from even getting into their fields, much less needing any irrigation water. New SWE accumulation has required additional delivery from the upper Snake Reservoir system to make room for what is now predicted to be much-above-average runoff during May, June, July.

Local farmers here in Ashton tell us they may not plant for another two weeks, putting the farming season more in line with traditional timing, rather than the extremely early seasons we have seen over the past three years. In the lower valley, farming is now behind the normal schedule, and irrigation diversion remains low. As reflected by flow in the Snake River over Milner Dam, there is currently 14,000 cfs of water in the upper Snake River system beyond what can be stored in the reservoir system and diverted for irrigation and managed aquifer recharge. An apples-to-apples comparison of 2017 with 2016 can be made by comparing data from this week’s Water District 01 water-right accounting report with that from the same date one year ago. On April 23, 2017, total natural flow in the upper Snake River was 22,069 cfs. This is the flow that would be passing Milner Dam if the river were completely unregulated by dams and diversions. On April 23, 2016, that total natural flow was only 12,584 cfs. On April 23, 2017, a total of 6,609 cfs was being diverted from the upper Snake River, the majority of that going toward aquifer recharge. On April 23, 2016, total diversion was 10,484 cfs, all of which was being applied to meet irrigation demand.

Long story short, we have a 15,460-cfs surplus right now versus a 2,100 cfs surplus last year. Last year, all of that surplus was being stored in the reservoir system, which reached only about 85% full, whereas this year, there is still so much snow yet to melt, that most of the surplus is being released out of the bottom of the system. To be sure, April 1 SWE values throughout the system were higher this year than they were last year, but not by that much. The big difference between the two years has been April precipitation.

Even had April turned out to be average, the water supply in the Henry’s Fork watershed as a whole would still have been somewhat above average, as fully explained and quantified in last week’s blog. The predictions in that blog are still valid, because they account for the full range of conditions that are possible to experience from April through September. Acutal streamflows and reservoir contents are still 90% certain to fall within the prediction intervals, but the wet April just increases the probability that water supply will be greater than the expected value and that delivery from Island Park Reservoir will be lower than the expected value.

From a fishing standpoint, hatch-timing and river conditions will seem more “normal” this spring and summer than they have over any of the past four years, but that “normal” still includes earlier runoff and earlier hatch timing relative to that in the 1970s and early 1980s.