My name is Ben Ortman and I am the newest addition to the HFF team. I was hired with HFF and moved to Ashton in January as a Conservation Technician, to work primarily on the 2017 Henrys Fork Economic Value Study in collaboration with Idaho Department of Fish and Game. With about half of my time dedicated to the economic value study, I am left with a good chunk of time to put towards other research endeavors, such as Buffalo River fish ladder monitoring.  The following is a summary of the results from the first five weeks of monitoring the 2017 fish migration through the Buffalo River fish ladder. 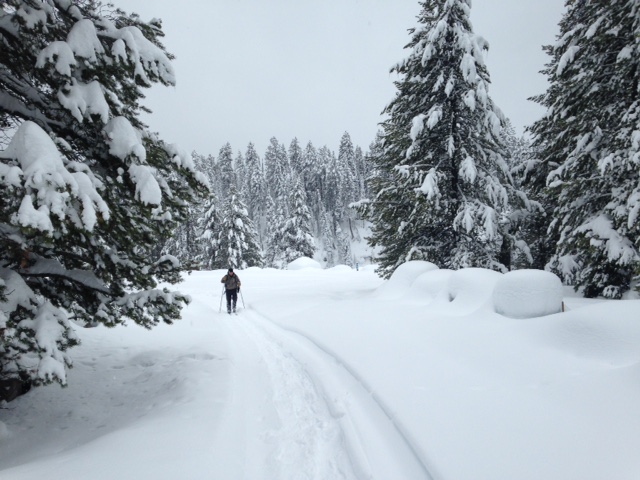 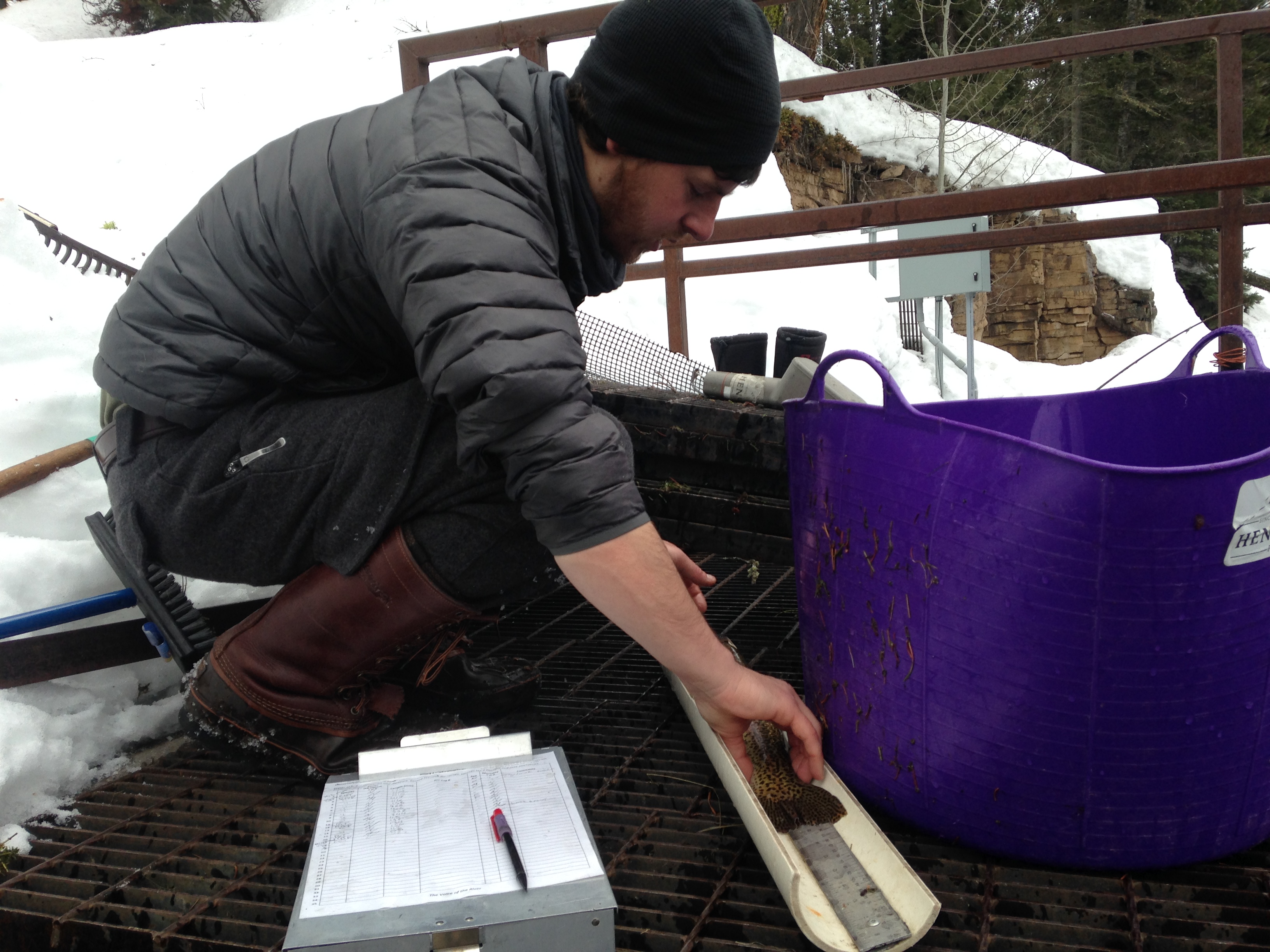 In the early 1990’s, it was recognized that the population of Rainbow Trout in the Henry’s Fork was being limited by lack of available spawning habitat below Island Park Dam. In response to this issue, in 1996 a working group of the Henry’s Fork Watershed Council realized the goal of restoring fish migration from the Henry’s Fork into the Buffalo River with the completion of a fish ladder on the Buffalo River Dam. The initial ladder wasn’t designed to facilitate juvenile fish passage and was modified in 2006 to increase juvenile trout passage upstream to Buffalo River habitat particularly during winter months when Island Park flow is regularly low.

Each year a fish trap is set up and operated during the peak Rainbow Trout migratory period in the spring. The fish trap allows us to gather data on the juvenile and spawning fish that utilize the ladder to access Buffalo River habitat. Additionally, from 2013-2015 a number of migrating fish were implanted with PIT (passive integrated transponder) to better understand Henrys Fork Rainbows’ migration and habitat usage. Last year, former research assistant Christina Morrisett completed a 20 year summary on the Buffalo River Fish Ladder project and her results can be found here. Along with recording any tagged fish, our plan for 2017 is to continue ongoing monitoring efforts of the Buffalo ladder by visiting the trap up to three times a week and recording species, length, and sex of mature fish when possible. 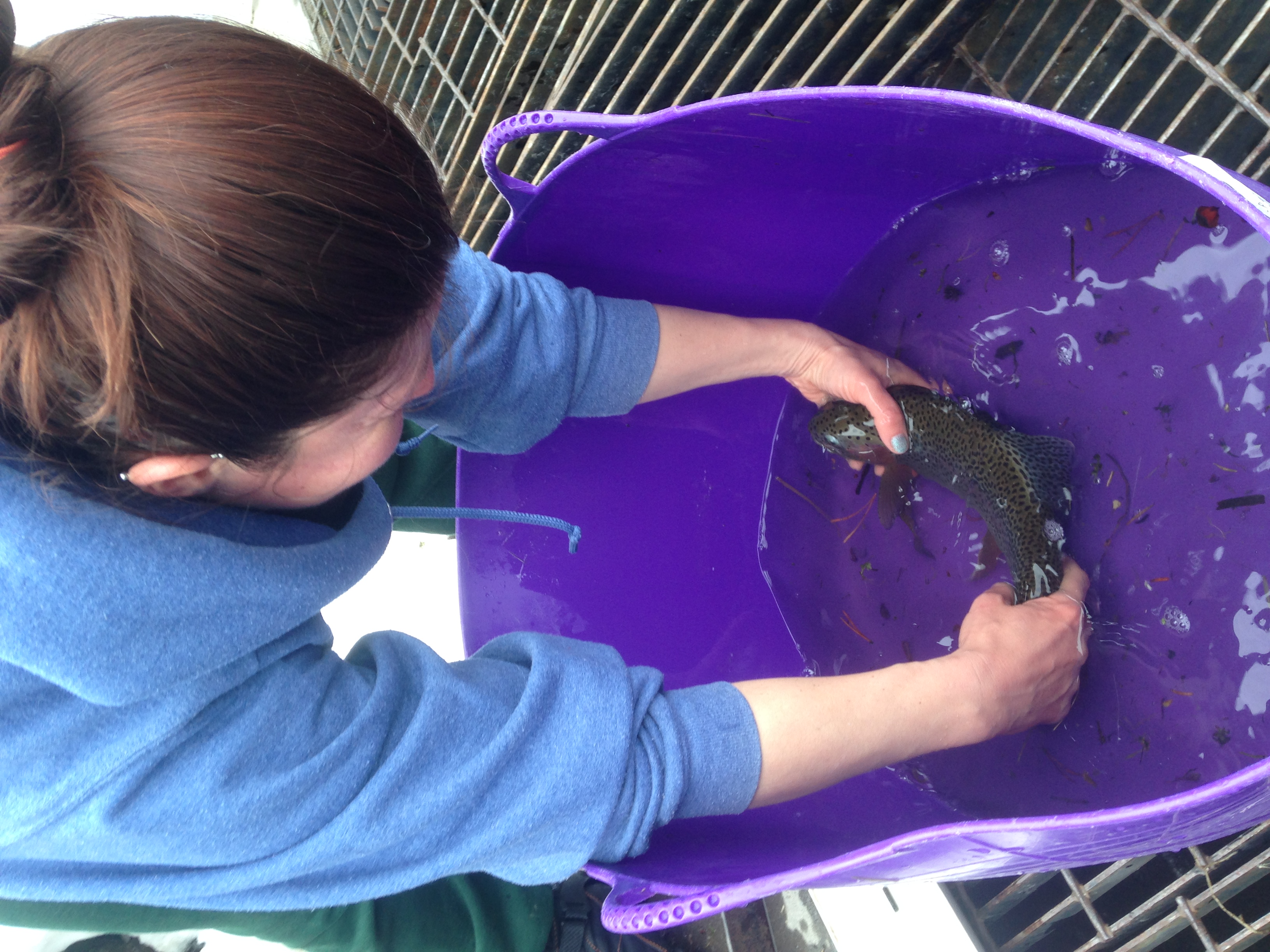 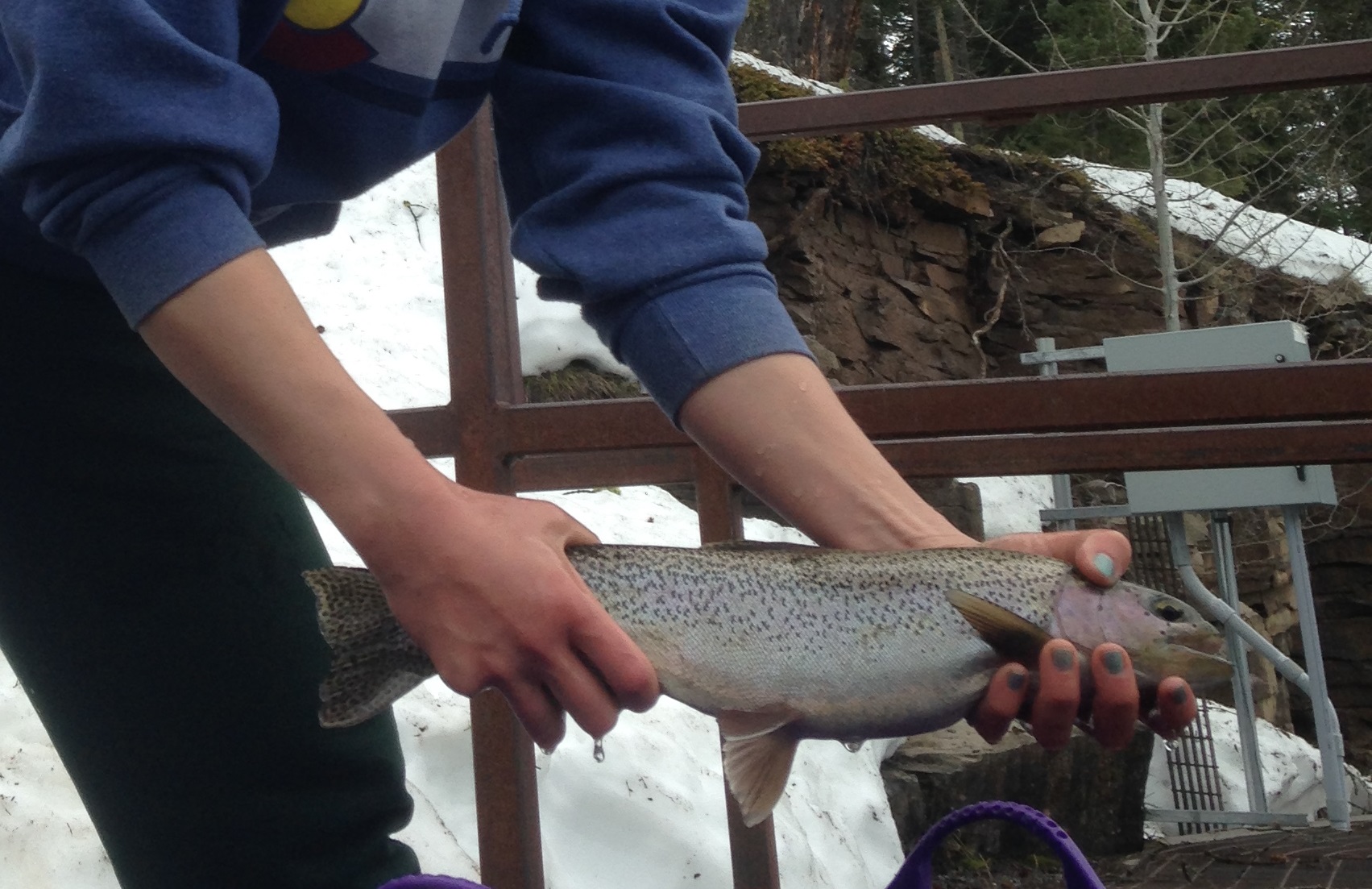 Similar to passed monitoring efforts, we begun operating the Buffalo River fish trap in mid-February. Contrary to the small percentage of other species that were seen in 2016, the only two species that have been observed to date are Rainbow and Brook Trout. When evaluating Rainbow Trout, we grouped fish into three size groups consisting of spawners (greater than 12 inches), juveniles (less than 6 inches), and “in-betweens” (6-12 inches.) Over the past five weeks we have trapped a total of 219 fish, 171 of which were Rainbow Trout. The trap has yielded 49 spawning sized Rainbow Trout, which is two more than the 47 that were observed in 2016 over the same time period. Similarly, the total number of fish (consisting of Rainbow and Brook Trout) is only slightly below the 235 trout that used the fish ladder over this timeframe last spring. Additionally, the total number of juvenile trout (122) that have passed through the ladder this year has slightly exceeded the number total juveniles (121) from this period in 2016. Interestingly, though the number of total trout using the ladder through March 23 is similar to last year, the percentage of Brook Trout increased from 12% to over 25% in 2017. Take a look at this link to view a quick infographic displaying our 2017 results. With both the number of spawning sized Rainbows and total juvenile trout exceeding last year’s numbers it appears 2017 has seen a strong start to the Buffalo Fish Ladder migration run. Look for a more in-depth statistical analysis of our Buffalo Ladder monitoring project in the coming months as we get a better idea of how 2017’s run compares to previous years.