On April 1, the traditional date of peak-snowpack measurements around the western U.S., snow-water equivalent (SWE) in the upper Henry’s Fork watershed was at 106% of the 1981-2010 median. However, this value was only 98% of the long-term mean, based on records that go back into the 1930s at some sites. Among 32 river basins around Idaho, Montana, and Wyoming that are popular fishing and floating destinations, April 1 SWE was at or above the 1981-2010 median in all but 6 basins, which included the Gallatin, Clark Fork, Smith, Jefferson, and North Platte. The upper Henry’s Fork ranked 22nd out of the 32 basins. Fall River came in 11th, and Teton River 15th. The basins with highest April 1 SWE this year were the Wind River, Big Wood, and Little Wood. 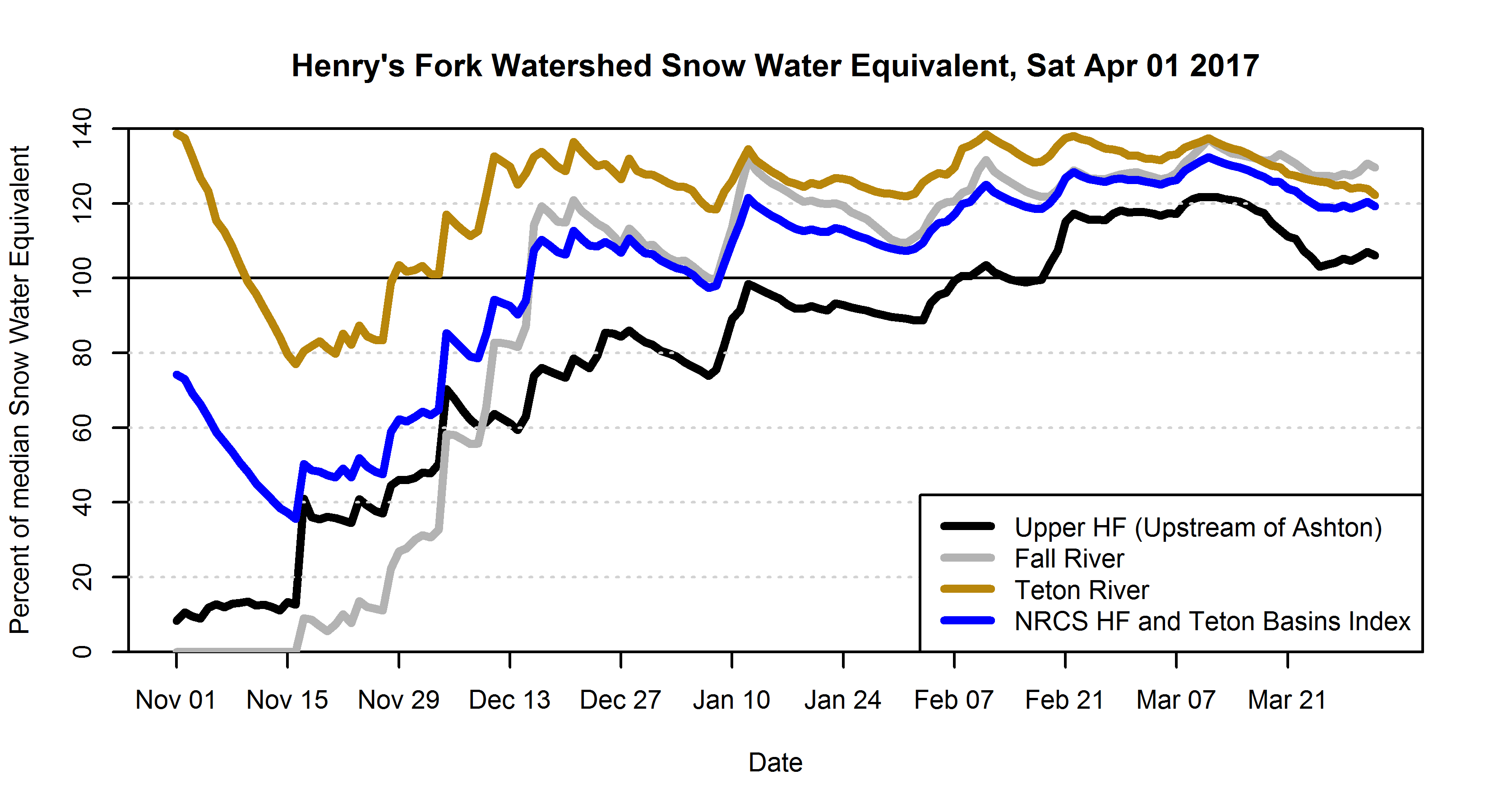 Graph above shows percent-of-median SWE since November 1 in the three subwatersheds of the Henry’s Fork watershed. Also shown is the percent-of-median SWE for the Henry’s Fork and Teton Basins, as reported in the Natural Resources Conservation Service (NRCS) daily snow/precipitation report. Table below shows data for individual sites, as well as the subwatersheds and the NRCS Henry’s Fork and Teton Basins index. Extensive loss of snow at Island Park, Crab Creek and Pine Creek Pass during the middle of March greatly reduced the amount of snow on the ground on April 1, the traditional date of peak-snowpack measurement across the western U.S. Seasonal SWE accumulation peaked 10 days earlier than median at Pine Creek Pass and 15 days earlier than median at Island Park. Snowmelt during March contribute to high streamflows over the past few weeks, but that water will not be available when we need it most during mid- to late-summer. 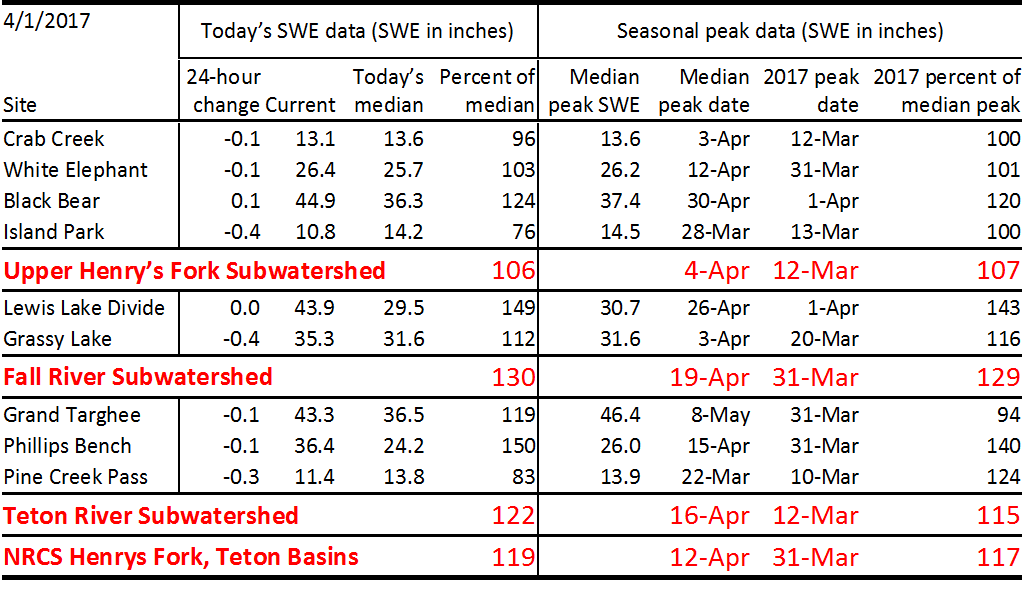 How does the current snowpack compare to long-term averages?

The table below compares the April 1 SWE values against both the current 1981-2010 median point-of-reference used by NRCS and against the long-term mean (the arithmetic average) at sites in the Henry’s Fork watershed with long records. The long-term means are all greater than the 1981-2010 medians, putting this year’s snowpack in a somewhat different light. The 106% of median figure for the upper Henry’s Fork is actually only 98% of the long-term mean. Thus, water supply for the spring and summer will be below average in the upper Henry’s Fork (upstream of Ashton), despite what appears to be a “good” snowpack.

How does the current HF snowpack compare to that in other basins?

The table below gives April 1, 2017 SWE data and water-year-to-date precipitation for 32 river basins across Idaho, Montana, and Wyoming that are popular for fishing and other river recreation. All data are reported as percentages of the 1981-2010 median. The basins are in descending order of April 1 SWE as a percent of median. The highest snowpacks are generally to the west, south and east of the Henry’s Fork watershed, and the lowest ones are to the north. Fall River and Teton River rank in the top half of the 32 basins, whereas the Henry’s Fork comes in 22nd, essentially tied with the Madison. Most of the popular fishing destinations in Montana are near the bottom of the list, including the Madison, Gallatin, Jefferson, Smith, Upper Clark Fork (including Rock Creek), and Bitterroot. Plan on fishing these rivers earlier in the season rather than later, and plan again on the possibility of afternoon fishing closures and low streamflows again in 2017. 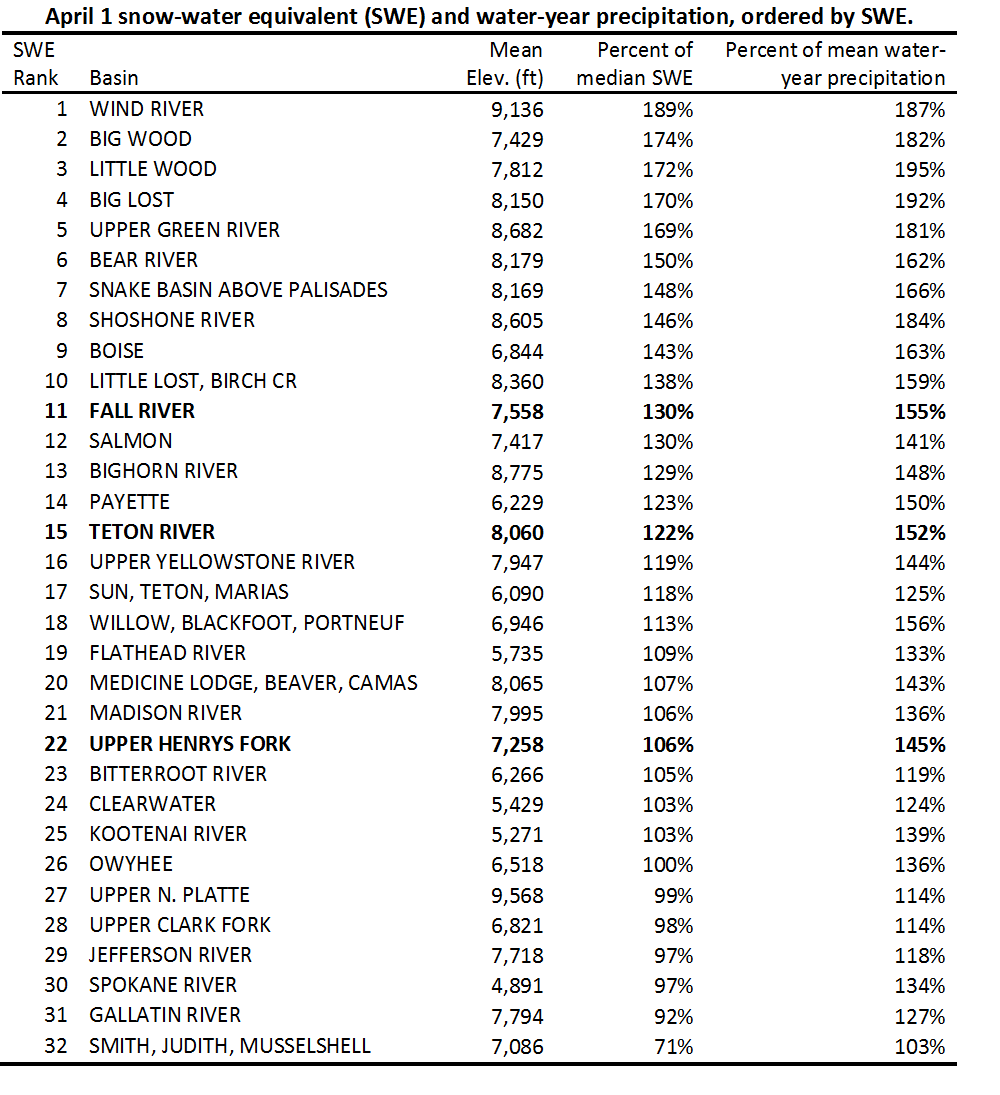