Snowpack in Upper Henry’s Fork Watershed: Below average and lower than its neighbors

Summary: Snowpack in the Upper Henry’s Fork Watershed is Below Average

Now that outflow from Island Park Reservoir is stable at its mid-winter value, our water-supply attention turns to accumulation of water in the snowpack and predictions for the upcoming spring. This blog will set the stage for assessing SWE and what it means for management of Island Park Reservoir and streamflows this spring. I will provide the usual reservoir update at the end of the blog, for those of you who have been following that since the fall.

Overview of the relevent snow-survey sites

The Natural Resources Conservation Service (NRCS) maintains a large network of snow-survey sites throughout the western U.S. The sites that transmit daily data via telemetry are the most useful to us and are called “SnoTel” sites. You can explore the entire NRCS SnoTel network through a really cool interactive map, linked here. The nine SnoTel sites that indicate water supply in the Henry’s Fork Watershed (Upper Henry’s Fork, Fall River, and Teton River subwatersheds) are shown in the map and accompanying table below. 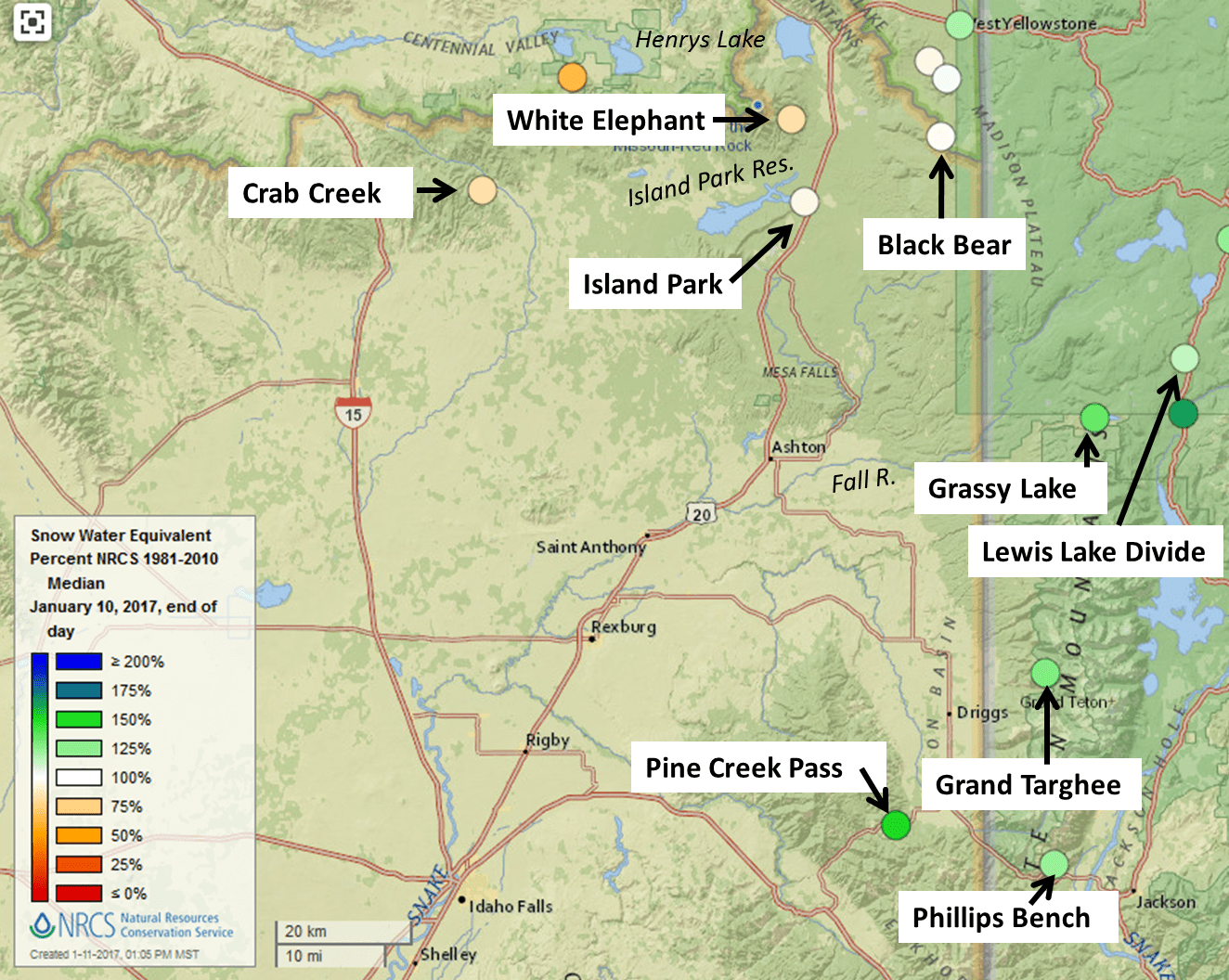 Map (above) and key (below) to SnoTel sites that indicate water supply in the three subwatersheds that lie within the Henry’s Fork Watershed.

Spatial patterns–across the West and close to home

So far this winter, the trajactory of snowstorms in the western United States has resulted in above-average snowfall in the southern Cascades, Great Basin, Wasatch, southern portion of the Snake River basin, and the Colorado Rockies and below-average snowfall in the northern Cascades, northern and central Idaho, and Montana. This is readily visible in a screen-shot of the interactive map linked above. 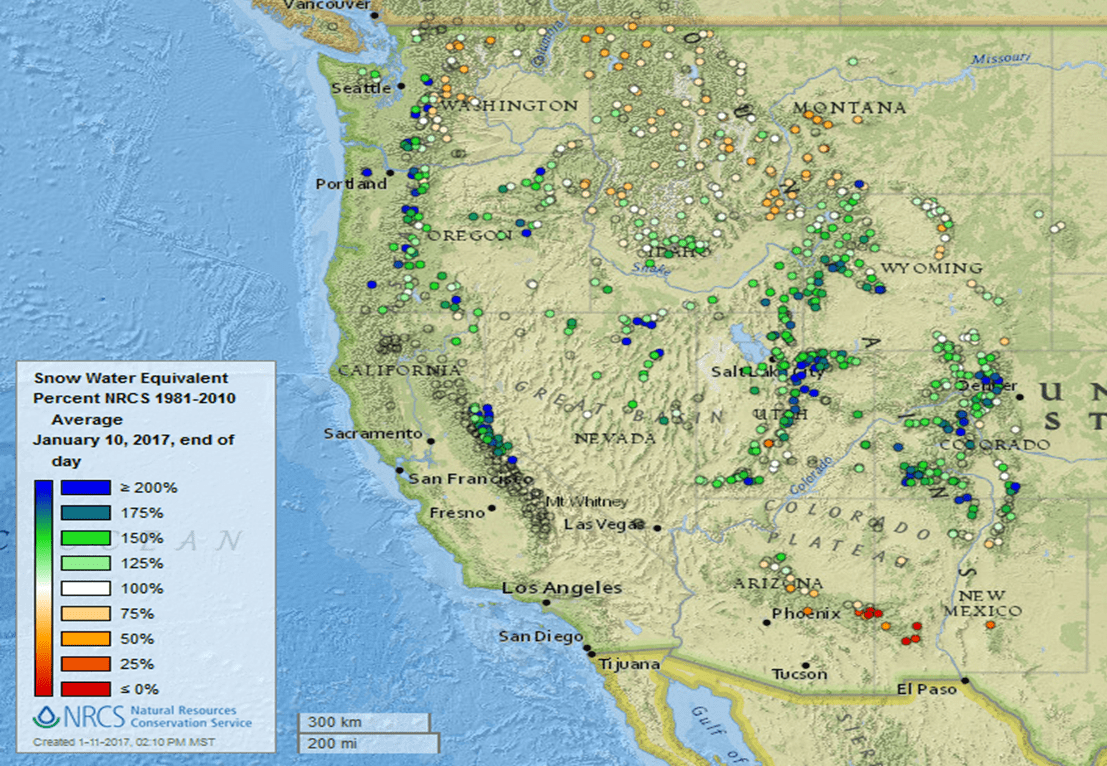 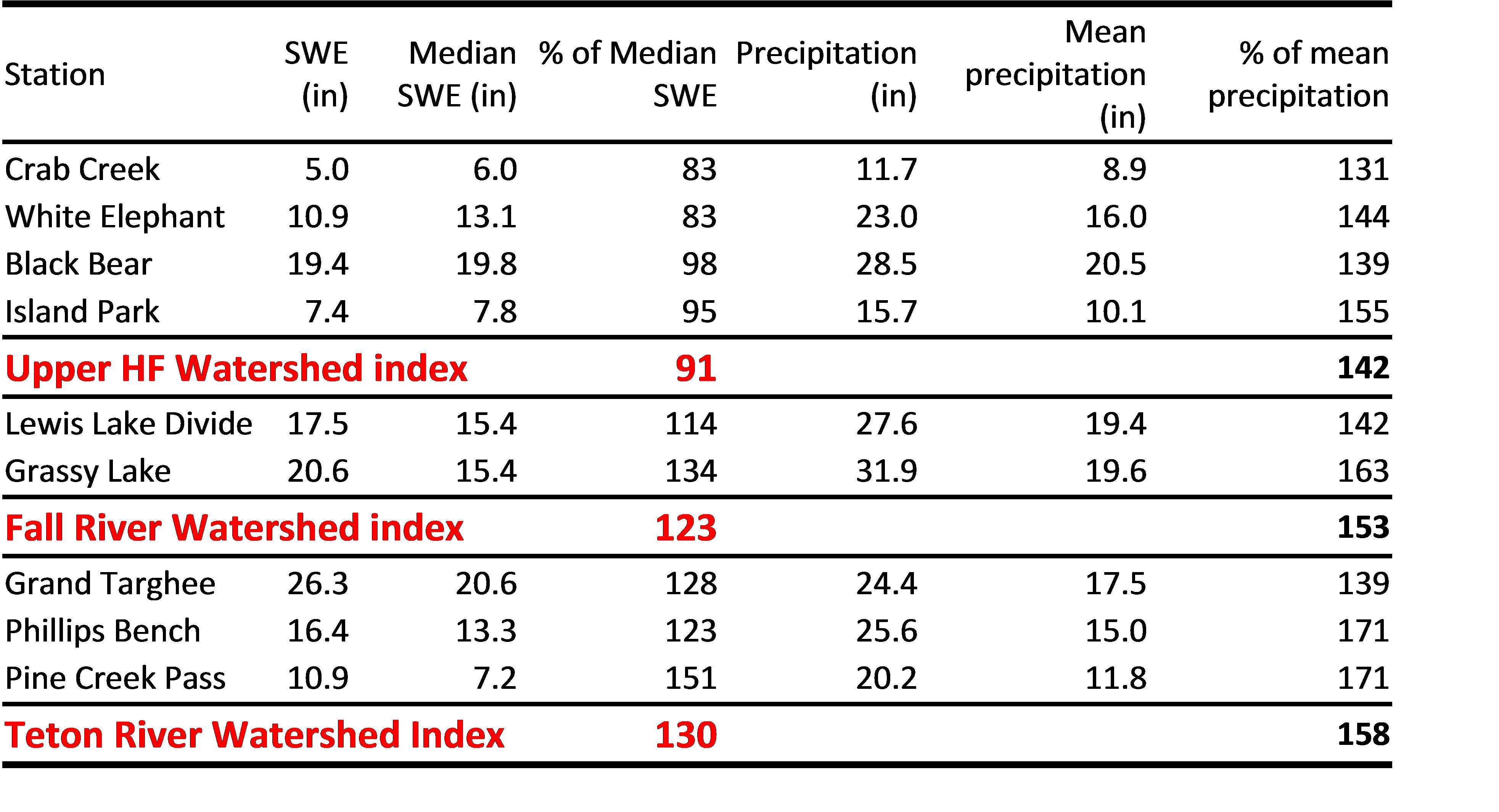 Snow-water-equivalent this morning is only 91% of the 30-year median in the upper Henry’s Fork watershed but increases to 123% of median in the Fall River watershed and 130% in the Teton River watershed. This increase in SWE with distance south from the Montana-Idaho border reflects larger spatial patterns across the west.

Then why did I read that snowpack is above average in the Henry’s Fork watershed?

The standard snowpack products–tables and maps provided by NRCS and other agencies such as the US Forest Service and US Bureau of Reclamation–do not divide the Henry’s Fork watershed into its three component subwatersheds but rather report a single watershed-wide average. Furthermore, these standard products, which end up in newspapers and on popular web sites, do not include the Crab Creek SnoTel site because it lies well outside of the Henry’s Fork watershed. Our analysis has shown that this relatively low-elevation site is one of the best predictors of water supply in the upper Henry’s Fork watershed, and its omission ovestimates water supply to Island Park Reservoir, which, of course, is the centerpiece of water management and fishing conditions in the Henry’s Fork. Click here to read more about the importance of the Crab Creek site and how we calculate water supply from SnoTel sites.

This year, SWE is above average in the Fall River and Teton River watersheds but below average in the upper Henry’s Fork watershed–the lowest being the two stations in the Centennial Range: Crab Creek and White Elephant. Omitting the Crab Creek site and including Fall River and the Teton River into the average provides a rosy picture of water supply over the entire watershed but greatly overestimates the water supply to Island Park Reservoir and to the springs that make up the majority of the river’s flow upstream of Ashton. The table above provides a more accurate picture of water supply in each of our three subwatersheds.

I encourage you to explore the large number of ways you can interact with SnoTel and precipitation data. In addition to the interactive map link, here are a few more links to get you started:

What is the current streamflow forecast for the spring?

Based on current SWE, the U.S. Bureau of Reclamation predicts streamflow in the upper Henry’s Fork watershed at 85% of average. Based on the current 91% of average SWE and current streamflow in the spring-fed tributaries to the upper Henry’s Fork (77% of average), my prediction is consistent with Reclamation’s. At the beginning of February, when a larger fraction of the winter’s snowpack is on the ground, I will produce projected hydrographs and reservoir levels that will have much more certainty than they do right now. However, predicting the amount of water that will end up in the reservoir and the river is less than half of the story. In recent years, timing of runoff has proven to have a greater influence over management of Island Park Reservoir and streamflows in the river downstream. See following links for how these predictions evolved during the winter and spring of 2016, which at this point in the winter looked very similar to this year in the upper watershed:

How a reasonably good February outlook deteriorated by March

Effect of early snowmelt on streamflow

The take-home messages here are:

Conditions at Island Park Reservoir as of 1/9/2017 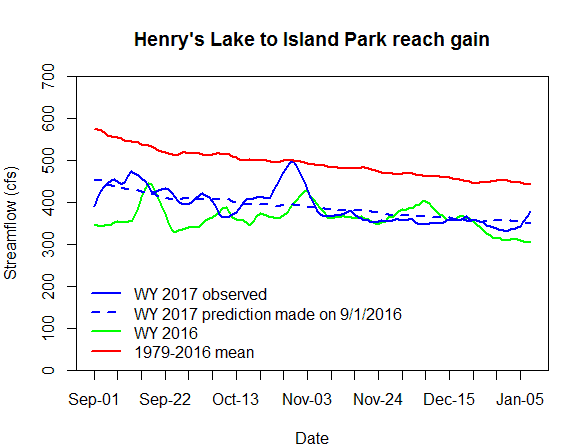 As decided at the November 21 meeting of the Island Park Drought Management Planning Committee (DMPC), outflow from Island Park Reservoir was increased during the week of November 28. The weather forecast at the time indicated that the first single-digit lows of the season would occur around December 2. Accordingly, outflow was increased on November 30 from 100 cfs to 150 cfs. A slight upward adjustment was made on December 9 to accommodate an adjustment of the USGS stream stage recorder made on December 7. Since December 10, outflow from the dam has averaged slightly above the DMPC’s winter objective of 160 cfs, and total streamflow downstream of the Buffalo River has averaged 354 cfs, compared with last year’s 299 cfs and the long-term average of 531 cfs (see graph below). At its January 10 meeting, the DMPC agreed to keep outflow from Island Park Reservoir at its current value for the next 6 weeks, even though the reservoir is filling a little more slowly than anticipated and upper Henry’s Fork snowpack is below average. 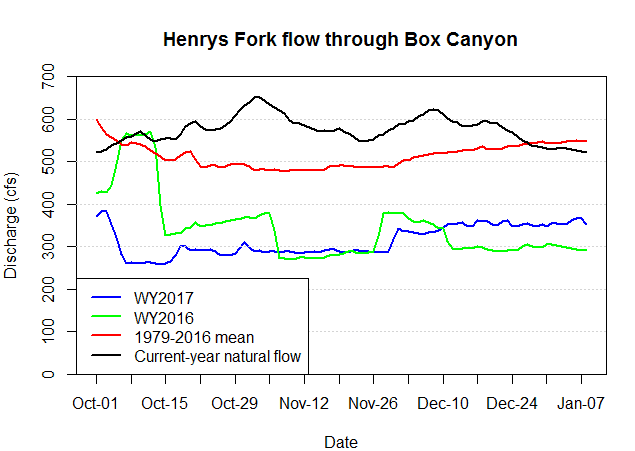 Total streamflow in the Henry’s Fork through Box Canyon (IP Dam outflow + Buffalo River flow) since October 1, 2016, compared with observed values in water-year 2016, and the 1979-2016 average. 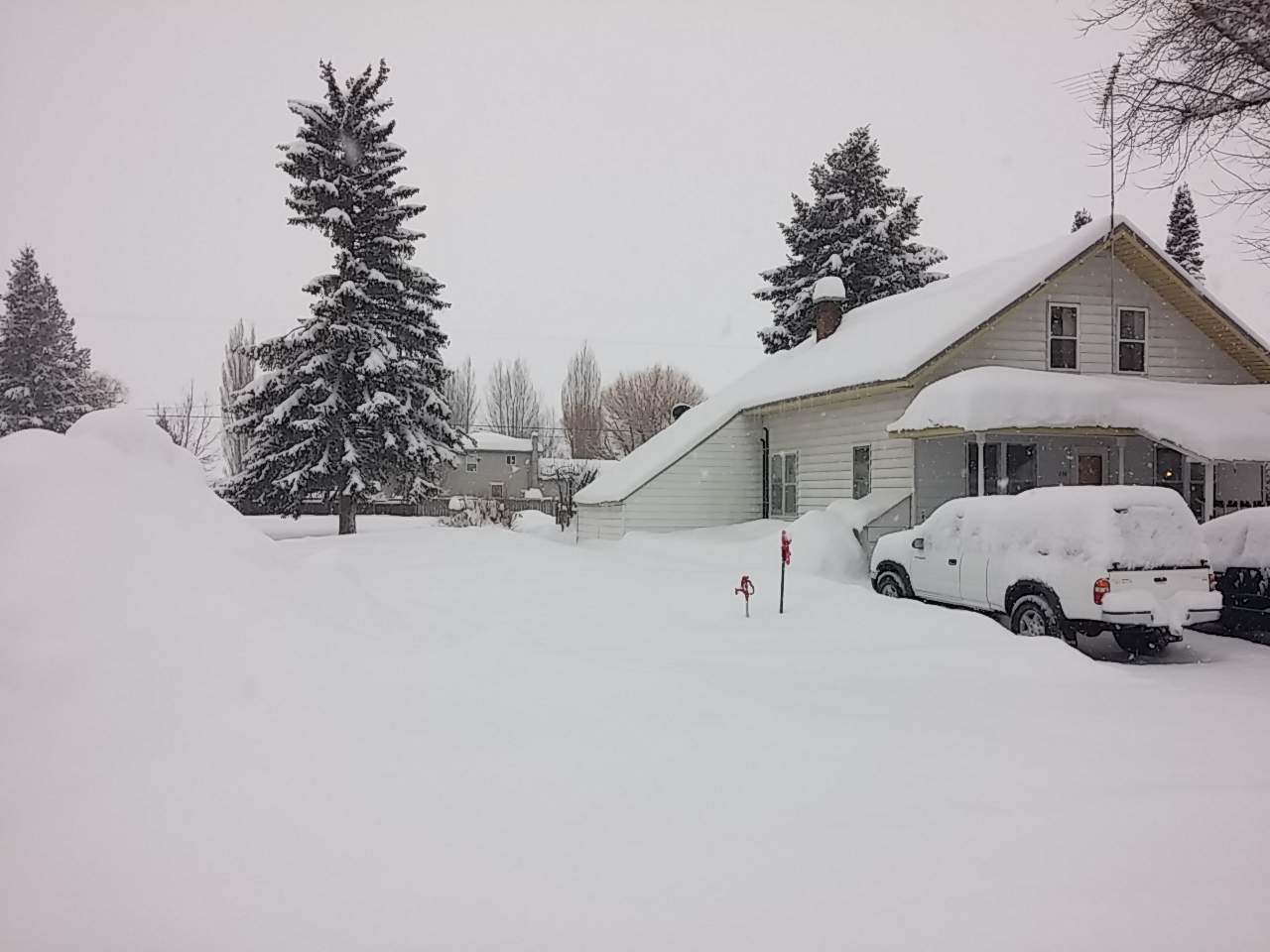