For the past two years, HFF has ended the year by taking a look back at our “Top-10” accomplishments. This year, we’re keeping that tradition going with HFF’s Top-10 list for 2016. Before you dive in, you can also take a look back at 2014 and 2015.

10.  Trout habitat use study published in international journal. Zach Kuzniar’s HFF-sponsored master’s thesis research on habitat use by rainbow trout in Harriman State Park was published in the journal Ecology of Freshwater Fish. The study’s most important finding was that physical habitat structure in the Harriman reach during the fishing season is provided by rooted aquatic plants, which, among other things, increase water depth at a given streamflow rate. A secondary result was that adult rainbow trout seek deeper water, all other factors being equal. The paper is available online at http://onlinelibrary.wiley.com/doi/10.1111/eff.12309/full.

9.  University of Idaho fisheries graduate joins HFF science team. In August, Bryce Oldemeyer joined the HFF team as a research associate, rounding out a full-time science staff of three with respective specialties in hydrology, water quality, and fisheries. Bryce earned his master’s degree in Fisheries Science at the University of Idaho and brings to HFF eight years of experience in fisheries biology, including six years with Idaho Department of Fish and Game. Check out Bryce’s blog at http://henrysfork.org/blogs/bryce-oldemeyer. 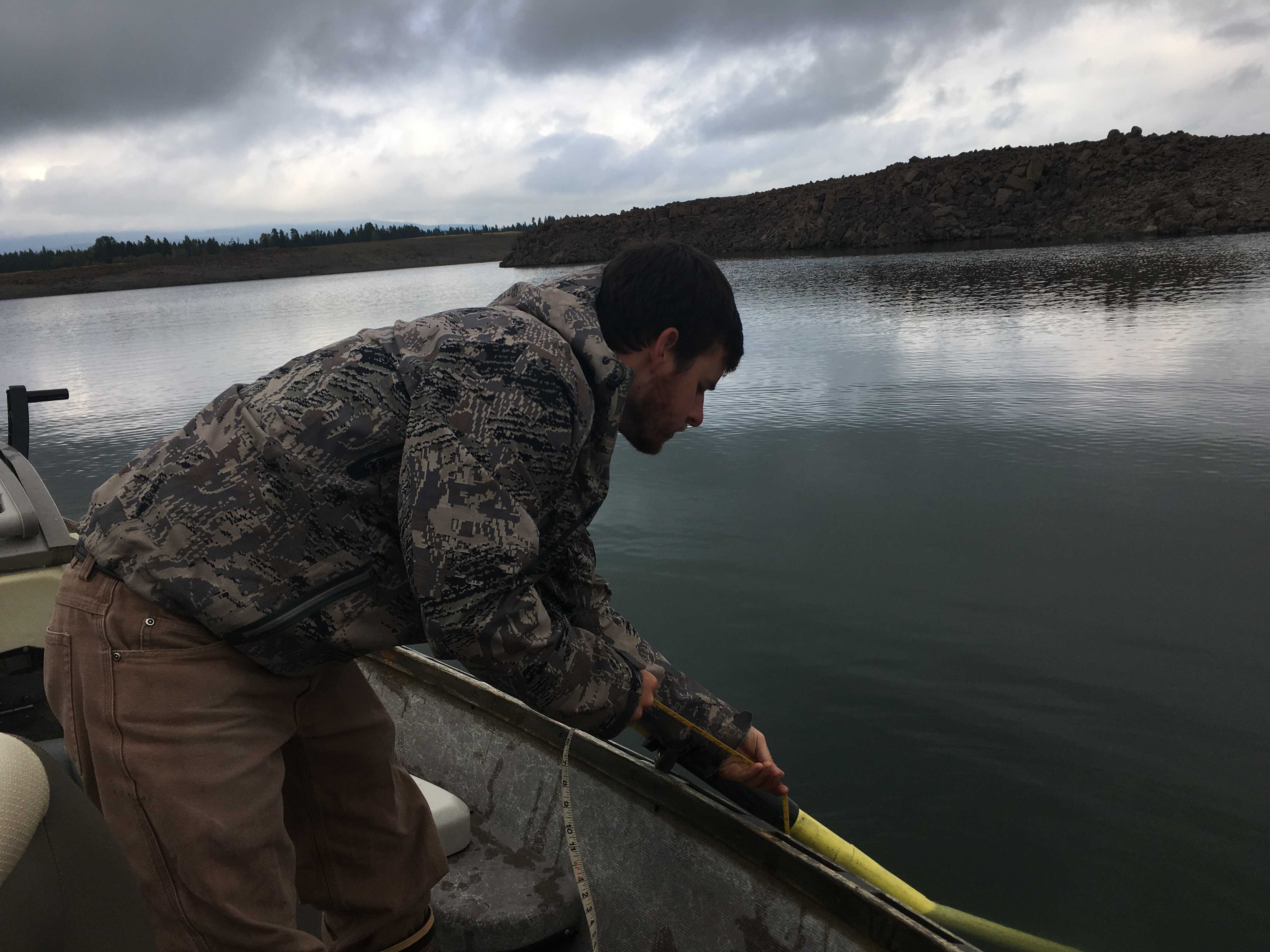 7.  Comprehensive review marks a decade of Buffalo River fish passage. After ten years of monitoring upstream and downstream migration of fish through the Buffalo River fish ladder, HFF prepared a comprehensive report documenting use of the ladder by rainbow trout and other species and quantifying the contribution of the Buffalo River to the Henry’s Fork fishery. On average, the Buffalo provides winter habitat for approximately 150 young fish that would not have survived the winter in the main river and return. On average, 200 spawning-sized rainbow trout migrate upstream each spring, and about 20% of young fish in the Henry’s Fork are related to these spawners, indicating the importance of spawning in the Buffalo River to the Henry’s Fork fishery. The report was written by former HFF Research Assistant Christina Morrisett [http://henrysfork.org/blogs/christina-morrisett] and is available here.

6.  HFF water-quality network expands to 11 sites. HFF now has water-quality sondes deployed in 11 locations, from Flatrock all the way downstream to the Parker-Salem highway. These sondes, which measure a variety of water-quality parameters, including temperature and dissolved oxygen, will allow us to monitor long-term changes to key water-quality attributes and evaluate effects of water-management actions. Permanent sites added in 2016 include the Buffalo River and Warm River. A short-term site was added in Box Canyon, immediately downstream of the Buffalo River confluence. This site showed that high-quality water from the Buffalo River improves water quality in Box Canyon during periods of high turbidity and high temperature in dam outflow. This year, we used our sonde data to quantify the dependence of turbidity in Island Park Dam outflow on season, reservoir elevation, and outflow point. In general, turbidity is lower during the winter and spring, when reservoir content stays above about 40,000 acre-feet (30% of capacity), and when a higher percentage of outflow is drawn through the power plant, versus the gates on the west side of the dam. For more details on what we are learning about water quality, see Melissa Muradian’s blog at http://henrysfork.org/blogs/mmuridian. 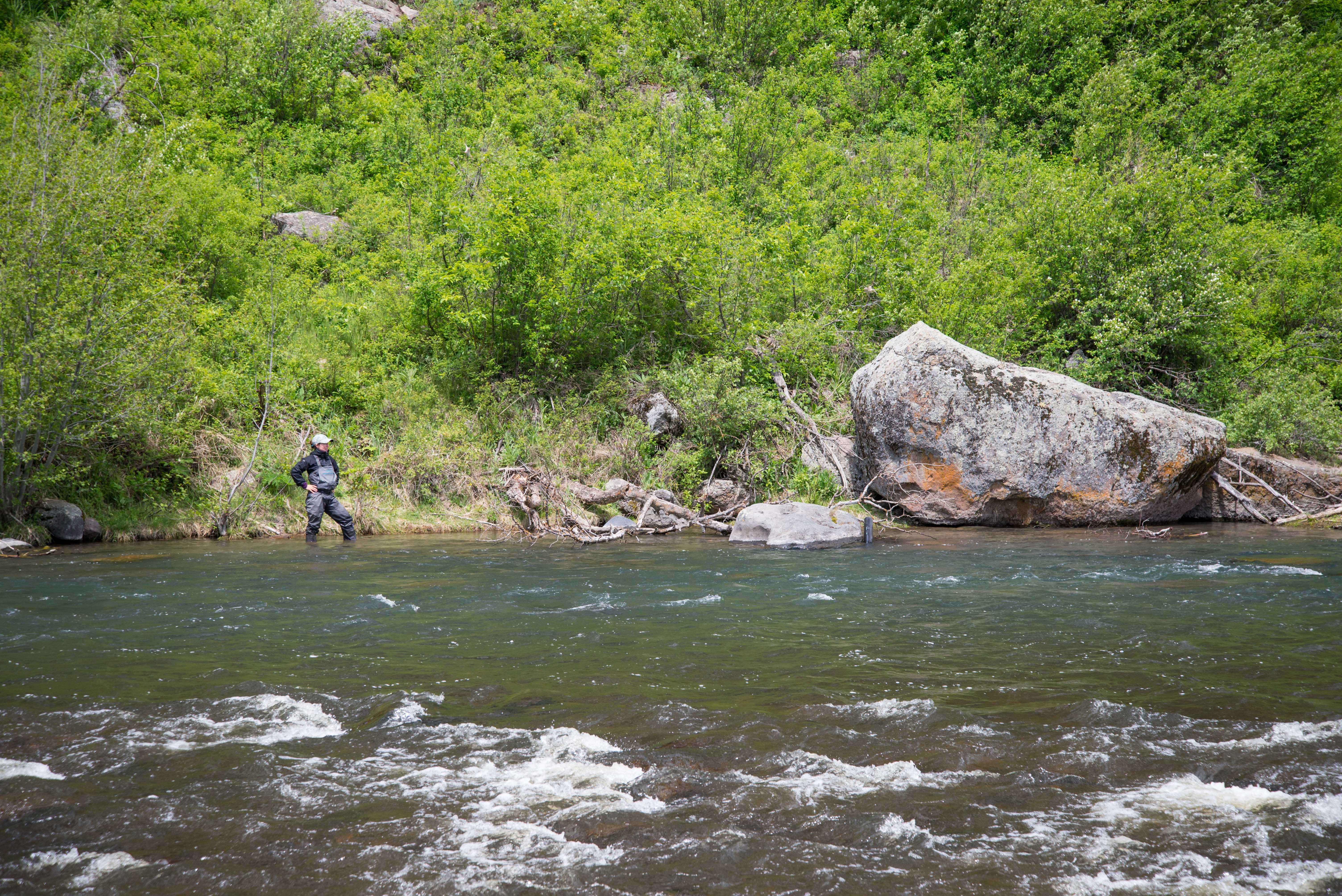 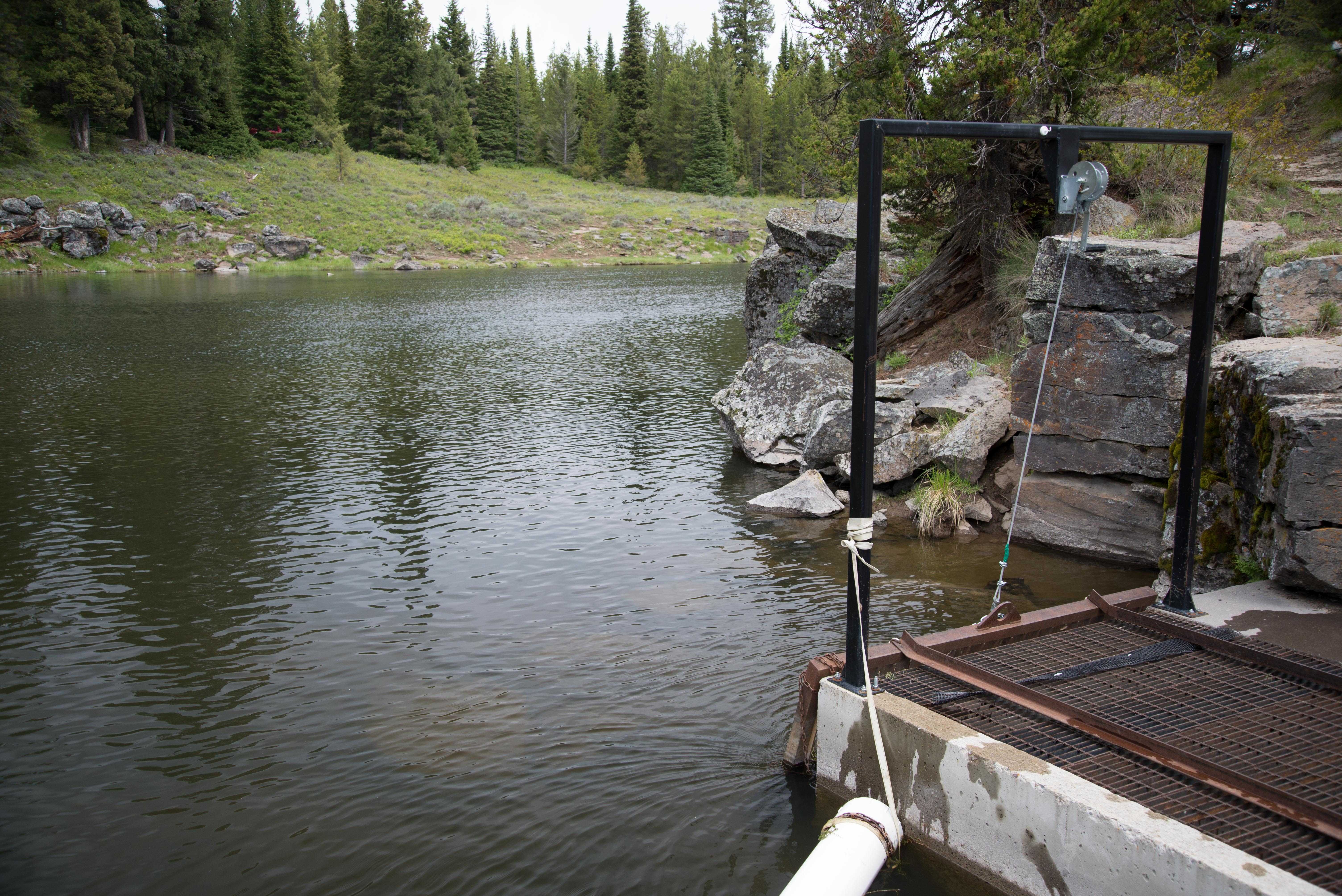 5. Second year of aquatic invertebrate sampling shows improved habitat conditions. In 2015, HFF established long-term monitoring of invertebrates at five key locations along the river: Flatrock, Last Chance, Osborne Bridge, Ashton (upstream of Ashton Reservoir), and St. Anthony. In 2016, we repeated sampling at these same locations but increased sample size in order to obtain higher statistical power to detect differences across sites and years. Two years of data show that aquatic habitat quality, as indicated by abundance and types of aquatic invertebrates, ranges from ‘Excellent’ at Flatrock to ‘Good’ at St. Anthony, decreasing with distance downstream from the headwaters. The only statistically significant differences between 2015 and 2016 occurred at Osborne Bridge, where total abundance of invertebrates decreased—primarily because of a decrease in worms and other non-insects—and where habitat-quality index increased from “Fair” to “Good,” reflecting an increase in percentage of mayflies, stoneflies, and caddisflies. Full details are available at http://henrysfork.org/what-do-macroinvertebrates-tell-us-about-henry%E2%80%99s-fork. 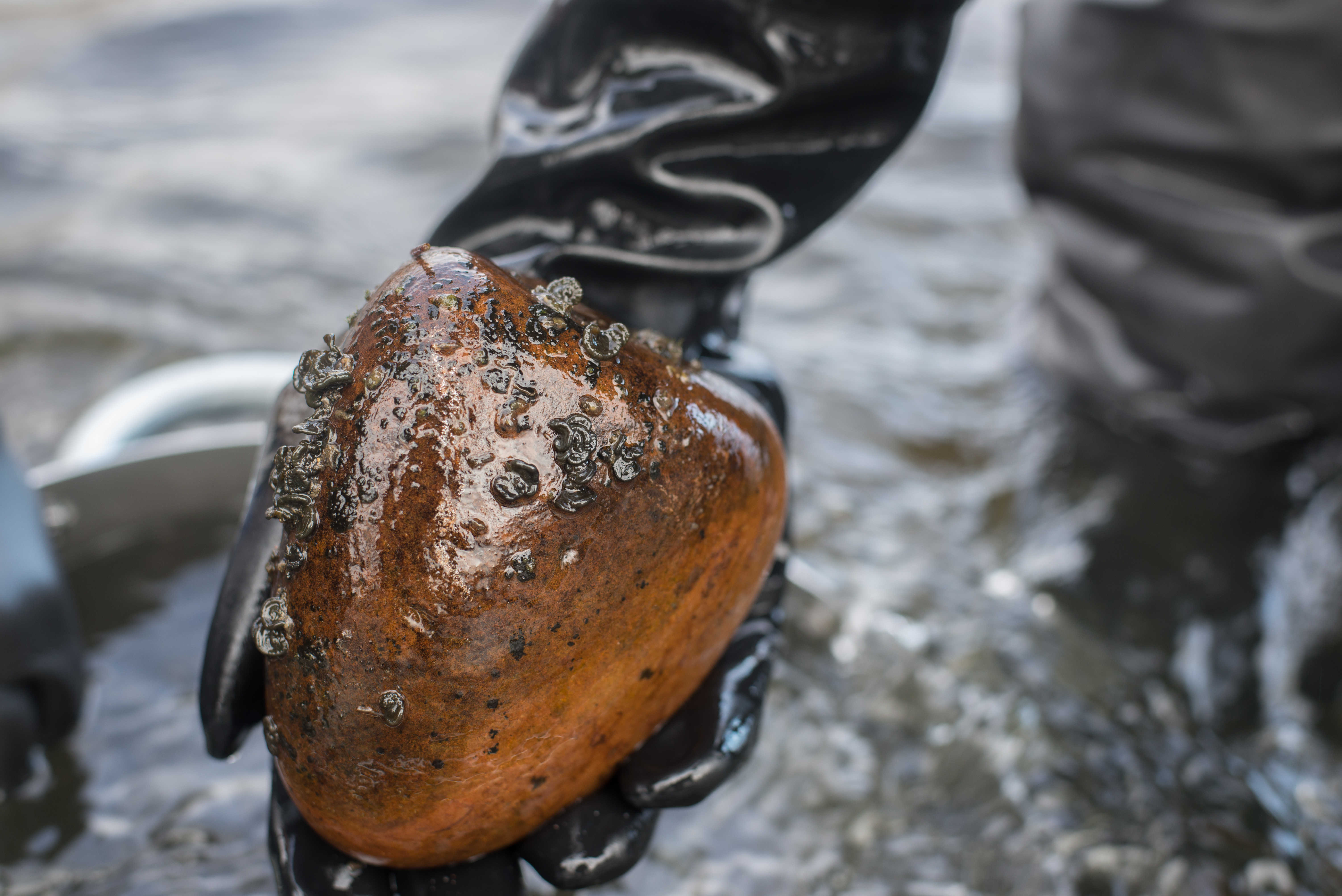 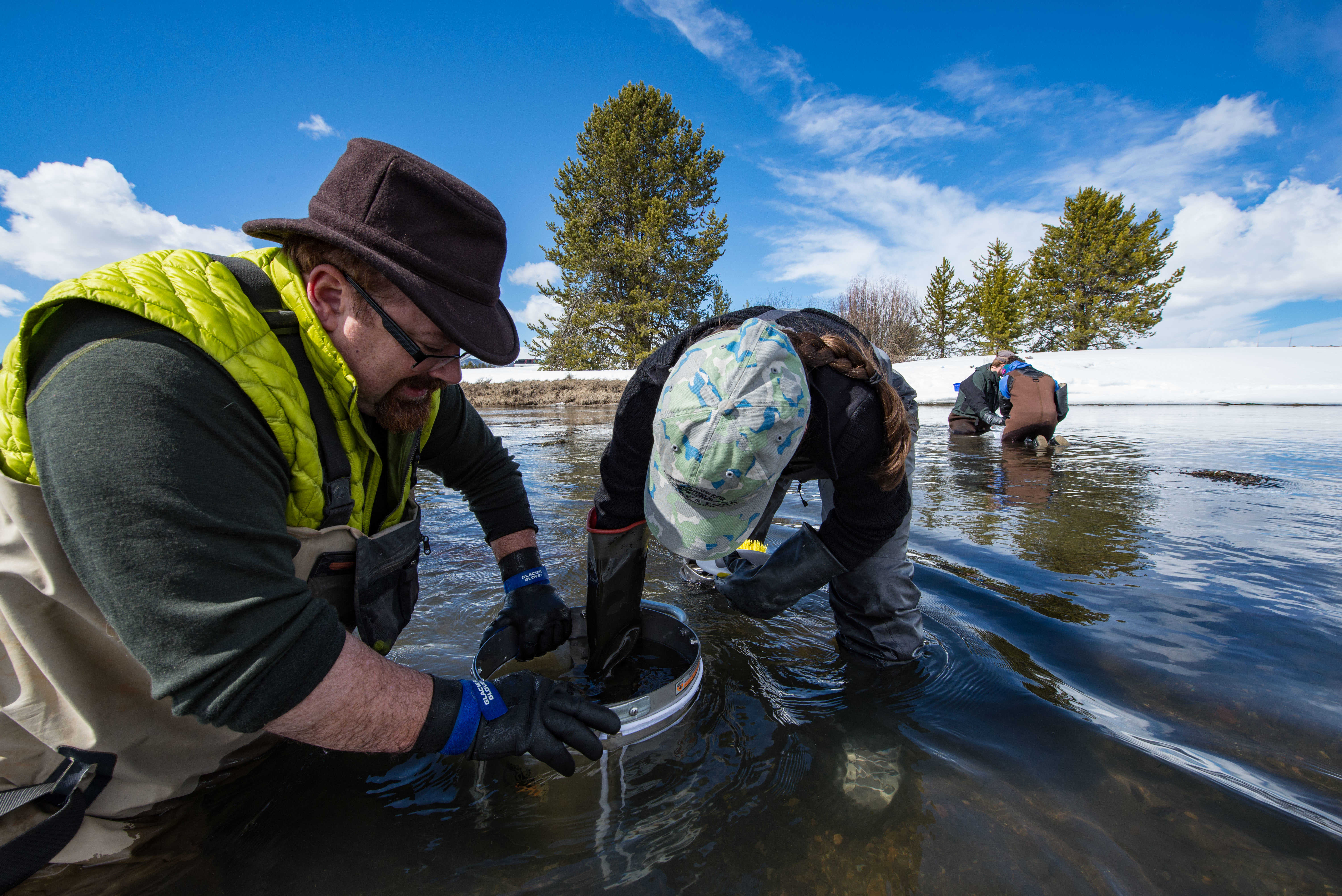 4. HFF events set new records. Thanks to incredible support from our members and Henry’s Fork community, HFF saw record attendance at many of our events this year, including receptions in Salt Lake City and San Francisco. Over 250 people attended HFF’s February reception in Salt Lake City, UT, and more than 220 people joined us for our November reception in San Francisco, CA. Our events also set records for giving. HFF members and friends raised over $7,000 more than the previous year at the Boise reception in April, $3,000 more than the previous year in Salt Lake, and $2,000 more on Giving Tuesday. Thank you to all of our members for a wonderful year! 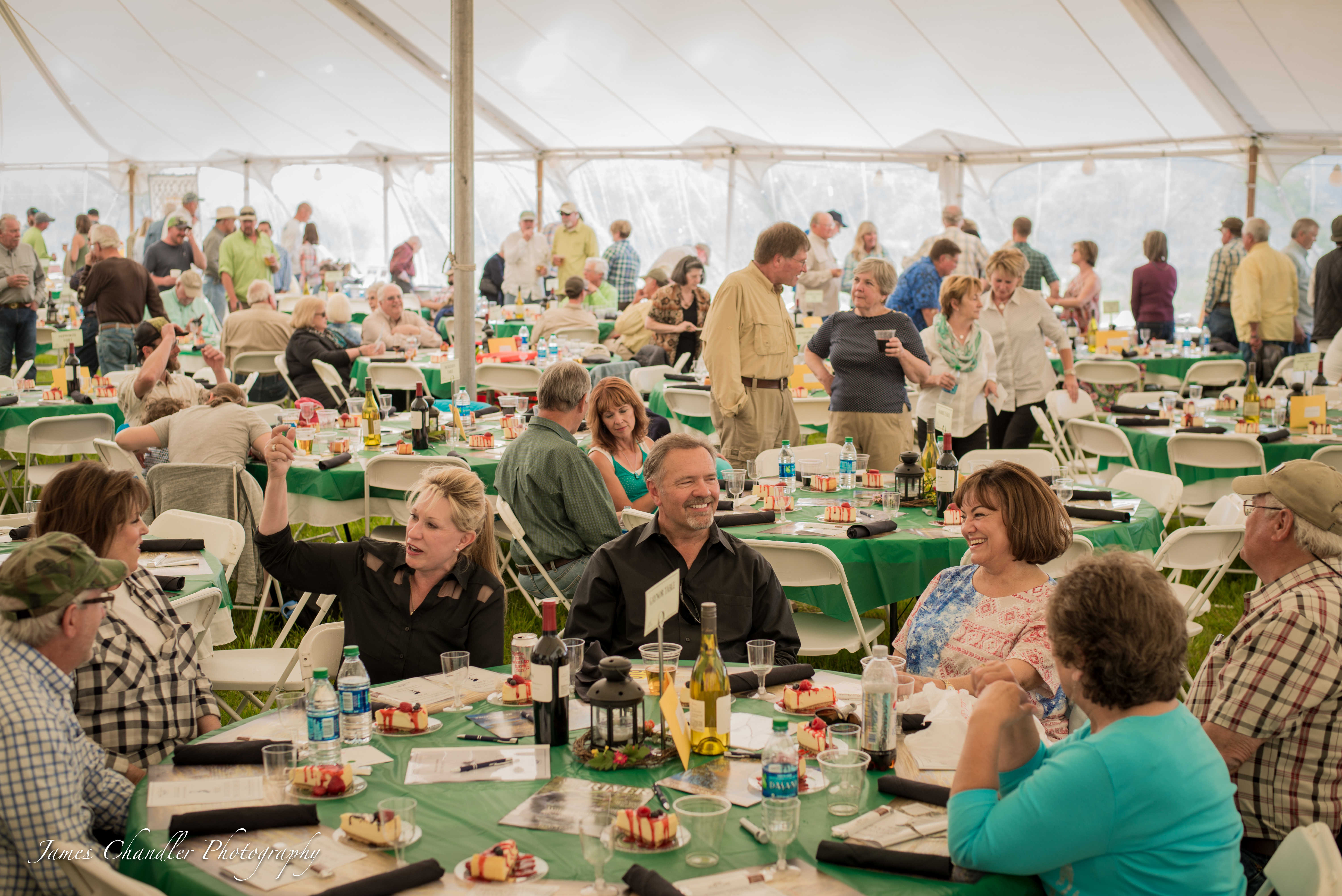 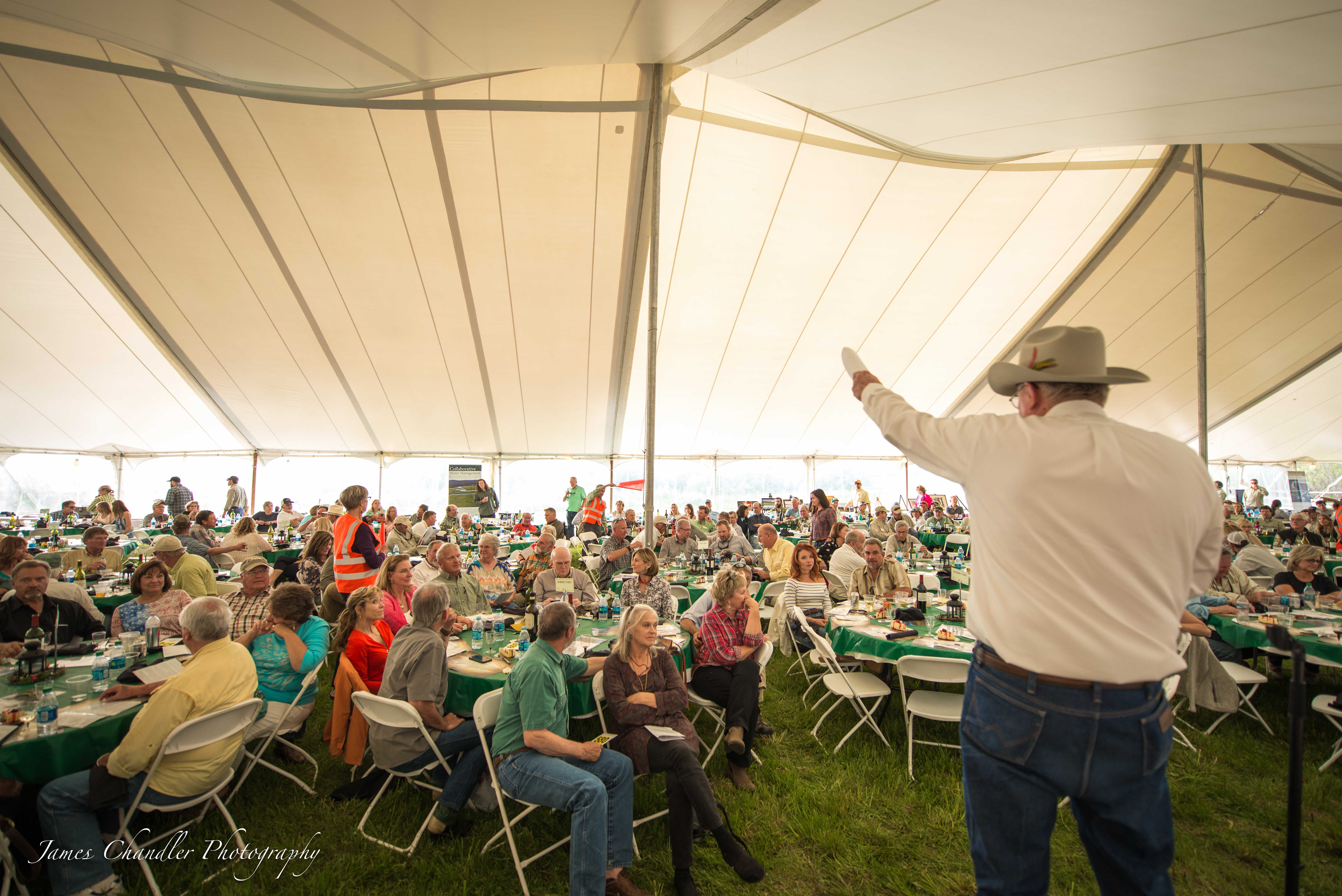 3. New fences, collaborations, and intern keep cows on the right side of the fence! As many may know, fencing has been part of HFF’s history from the very beginning. Fencing efforts in the 1980s gave the banks of the Henry’s Fork time to recover, but a recent increase in reports of cattle in the river has led HFF to revisit our fencing plan. On a snowy day in December 2015, HFF sat down with Harriman State Park (HSP) and a half dozen local grazing permittees to form a partnership and to chart a course for an effective 2016 grazing season. Thanks to that partnership, six miles of new fence line were constructed to protect the banks of the Henry’s Fork in historic Harriman State Park. That partnership also led to HFF’s first summer-fall internship dedicated to riparian fence monitoring and maintenance. Hunter Hill of Ashton received the Don C. Byers Memorial Scholarship and took a leadership role in our riparian fencing program. Thanks to Hunter’s monitoring and fencing repair efforts, and improvements to existing fence line, HFF received the fewest calls in five years or more about cows in the river. Read more in Hunter’s intern blogs. 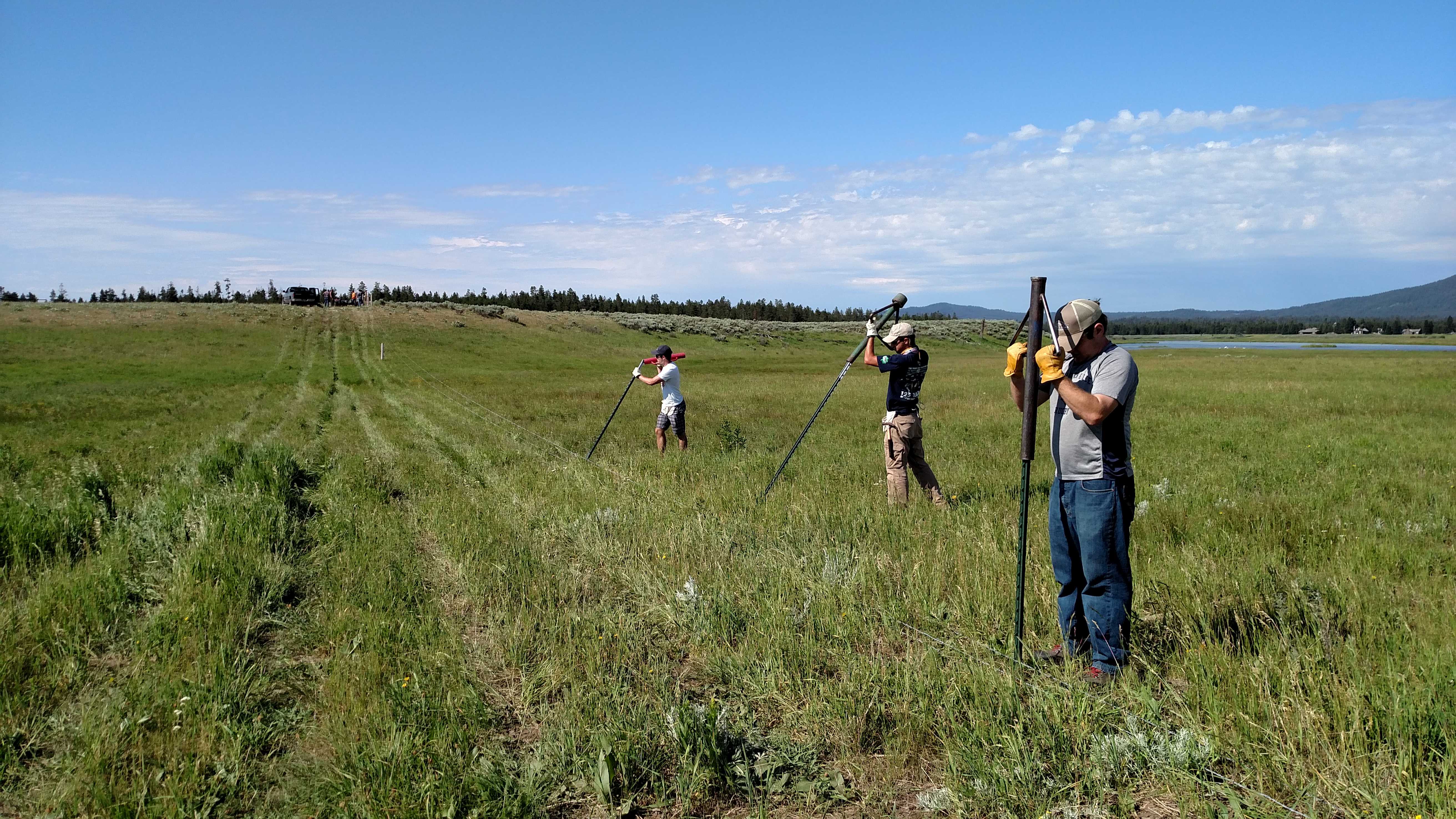 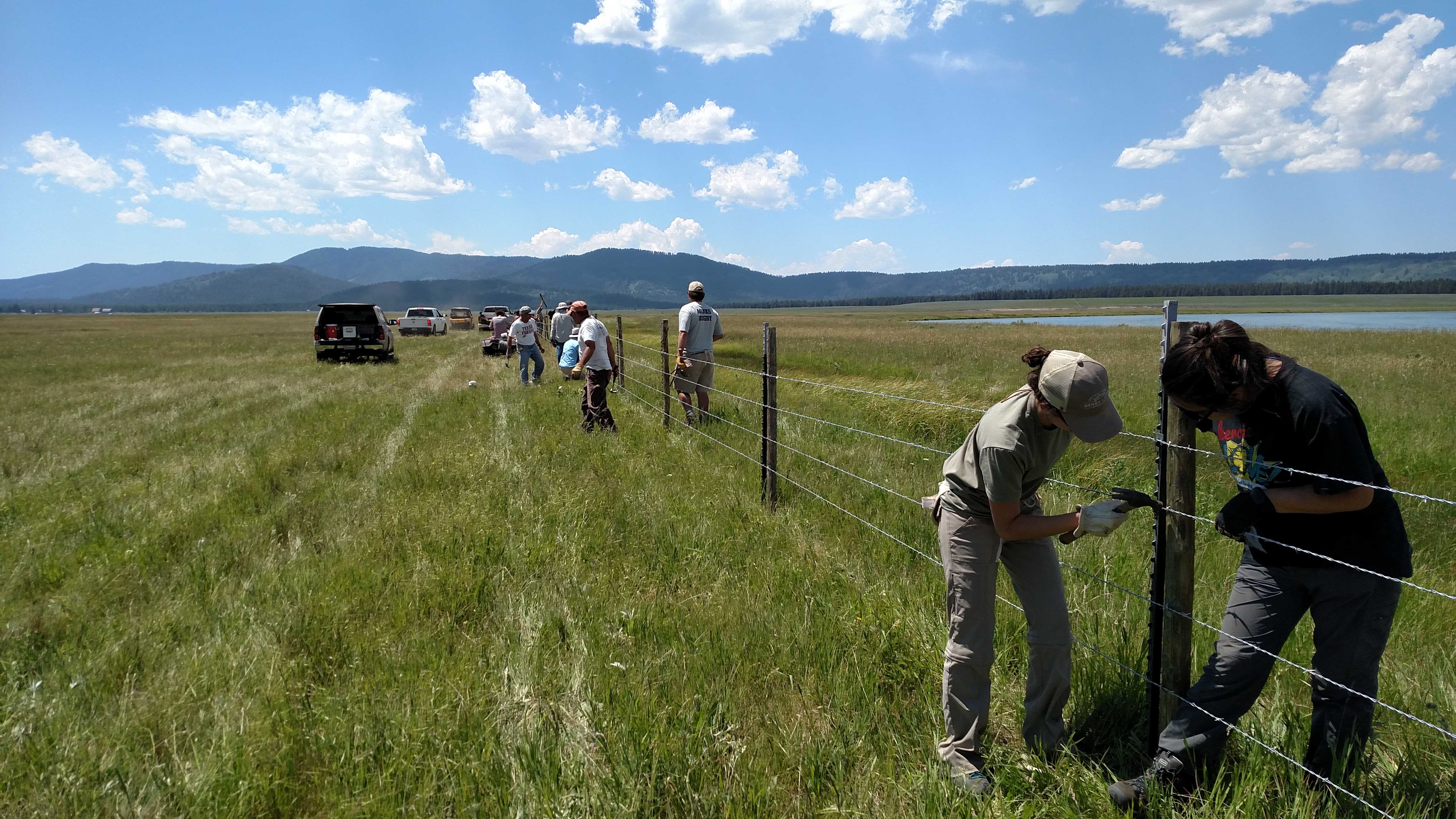 2.  Careful management and cooperation increase winter flow over last year.  On August 9, when HFF staff and Board members participated in a meeting of the Island Park Drought Management Planning Committee (DMPC), the outlook for winter streamflow downstream of Island Park Dam was bleak—perhaps the worst in the modern era. The reservoir was 28% full and dropping at 1,000 acre-feet per day. The watershed had received less than one inch of rain in the preceding 11 weeks. Without any rain in the forecast, we were facing the real possibility that the reservoir would be drained to around 7% of capacity, that mid-winter outflow from the dam would be around 80 cfs, and that possibly a period of 0 outflow would be required in the fall to achieve that. As it turned out, an aggressive and carefully implemented strategy developed by the DMPC kept the reservoir above 15% full, autumn dam release at an average of 105 cfs, and mid-December flow through Box Canyon 55 cfs (18%) higher than last winter. More information on how this happened is available in numerous HFF blogs, including http://henrysfork.org/current-henry%E2%80%99s-fork-water-update, http://henrysfork.org/fall-winter-river-flows-and-drought-management-planning-update, http://henrysfork.org/projected-winter-flow-below-island-park-dam, http://henrysfork.org/island-park-reservoir-update-11102016, and http://henrysfork.org/island-park-reservoir-update-12182016. 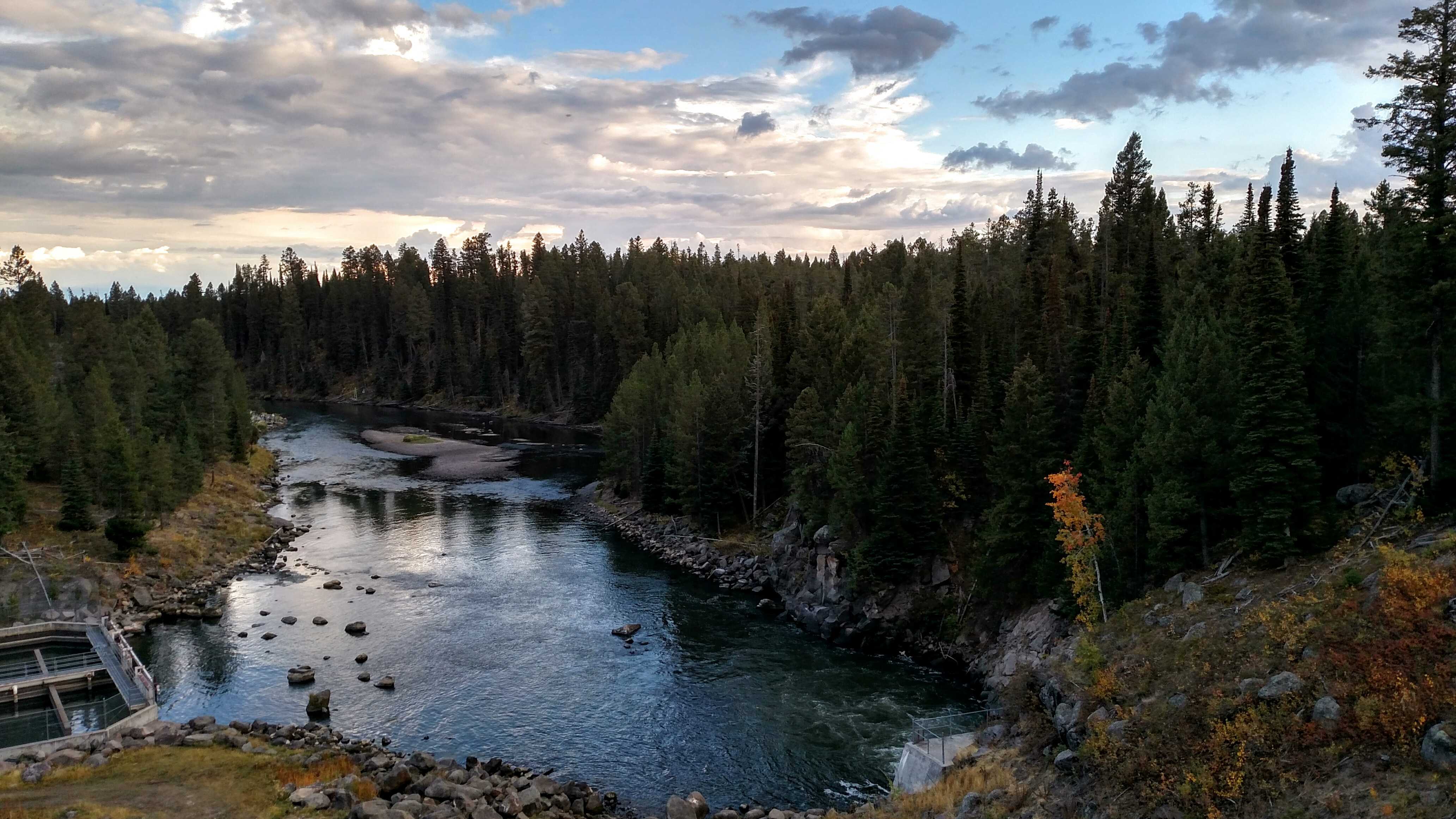 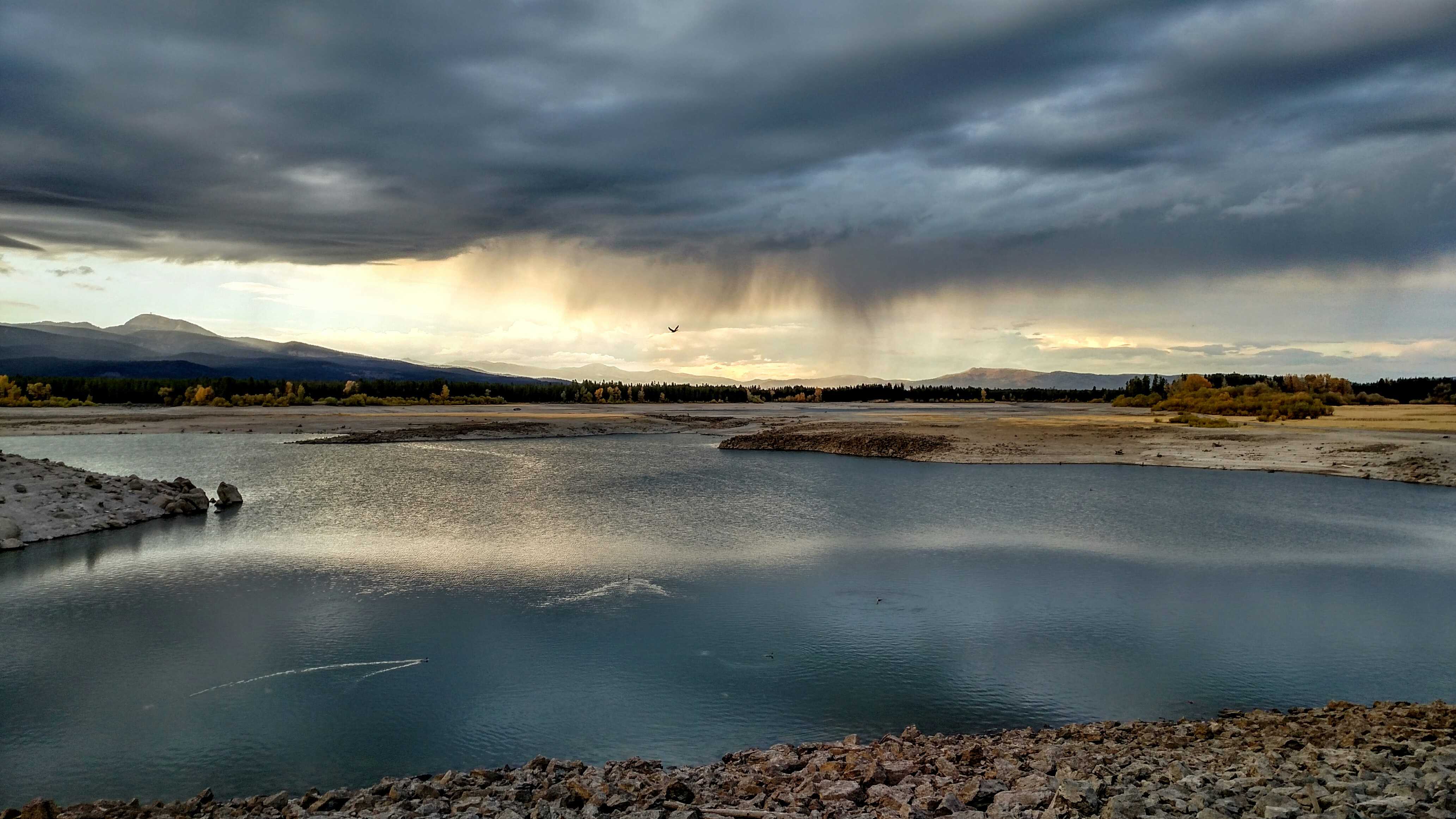 1.  HFF asks anglers about their fishing experience. In October, HFF created a survey to better understand the conditions anglers experienced on the Henry’s Fork this summer. Here are some initial findings. 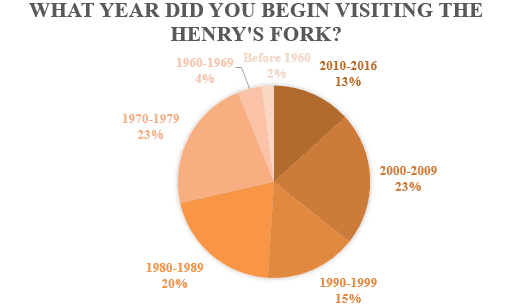 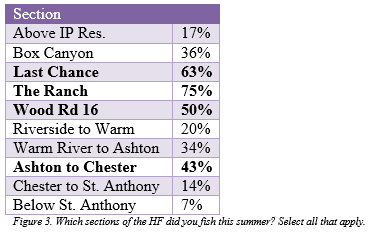 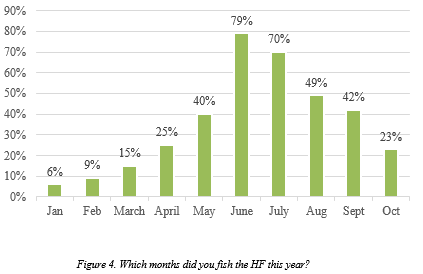 High flow out of Island Park Dam was the number one factor selected as having impacted fishing conditions from Island Park to Riverside this summer. A number of people also selected high turbidity, lack of rainfall, warm summer temperatures, wind, and low flows out of the dam. One thing was clear: many anglers experienced fishing conditions that were less than ideal this summer. In the comments section, many described the glory days of catching big fish after big fish on the Ranch, or of wet years and better flows below Island Park Dam. Unfortunately, this year simply brought more drought, early snowmelt, and little rain, leading to higher and earlier irrigation delivery. HFF has to get creative and find new ways to conserve this river in the face of unprecedented challenges. Some folks have suggested we hire lawyers and fight the irrigators; others hope we’ll boost our applied science and monitoring programs, so we can stay ahead of challenges and innovate new solutions; and others want us to focus on strengthening partnerships to work towards solutions.

But here’s the good news:  we’re up for the challenge. 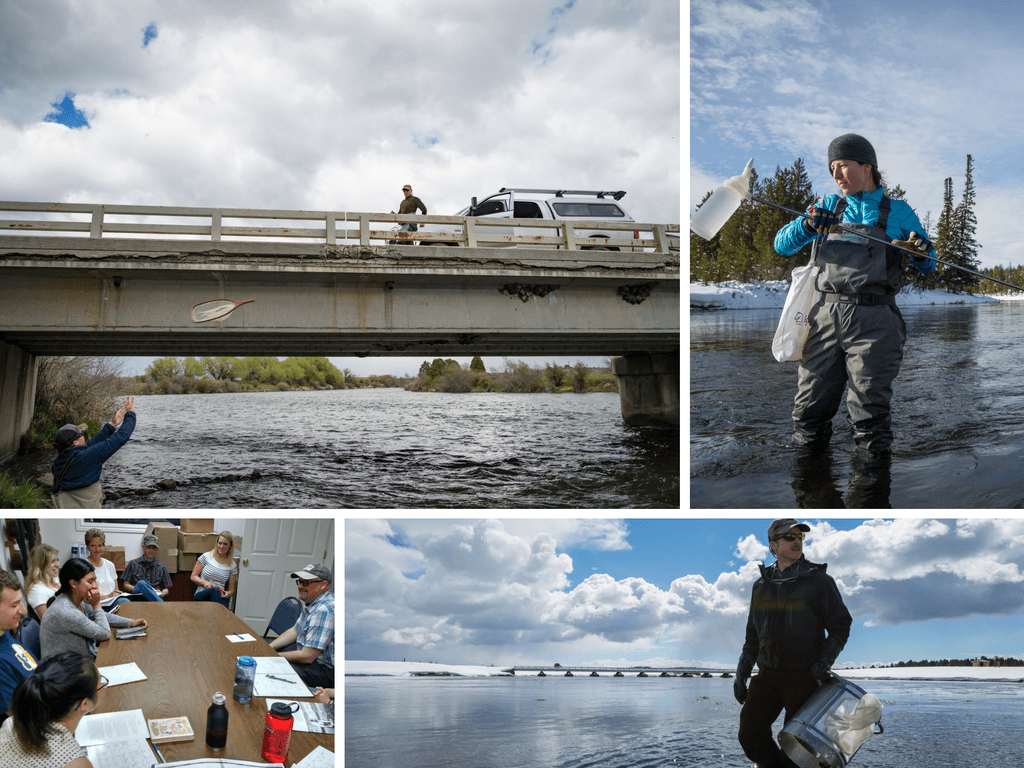