Following the Halloween rain-on-snow event, streamflows have receded to expected winter-baseflow levels (Figure 1). The increase over the past few days represents both increased streamflow during warm-sector precipitation on Thursday 12/15 prior to Friday’s cold front and the large amount of snow that fell directly on the reservoir surface during the most recent storm. Because of above-average precipitation since October 1 (Table 1), watershed inflow between Henry’s Lake and Island Park Dam has exceeded my September prediction by 869 ac-ft. 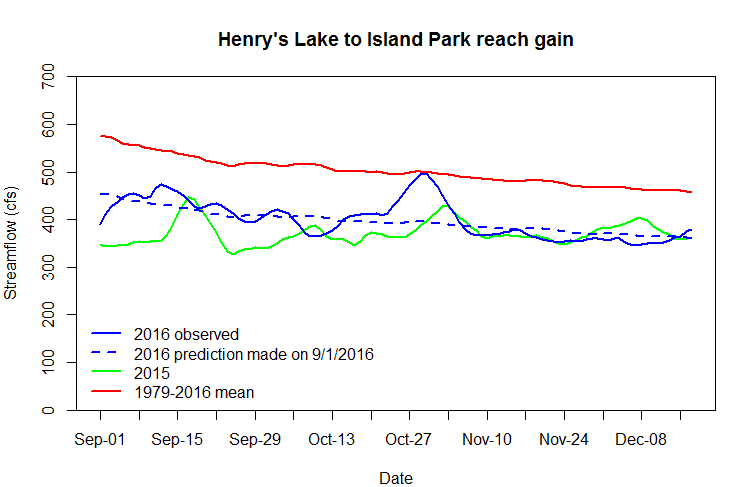 Figure 1. Reach gains between Henry’s Lake and Island Park, September 1 – December 17, 2016, compared with the prediction I made in September, observed values in 2015, and the 1979-2016 average. Note that I have changed the color scheme from that I have used in previous posts to match that used in U.S. Bureau of Reclamation Hydromet graphs.

Despite above-average precipitation since the beginning of the water year, current snow-water-equivalent (SWE) remains slightly- to well-below median at the four snow survey sites most relevant to streamflows in the upper Henry’s Fork watershed (Table 1). As of this morning (December 18), only four snow survey sites in the entire upper Snake River basin have below-median SWE on the ground; three of these are in the upper Henry’s Fork watershed (Black Bear, Island Park, and White Elephant sites), and the fourth is in the Teton watershed near Teton Pass (Phillips Bench site). Note that the Crab Creek site, while in the Centennial Range, is technically in the Sinks drainage and not directly in the upper Snake River drainage basin. Snow that had accumulated at these sites back in October melted during the Halloween rain event. November was much warmer than average and slightly dry, so snowpack at these sites has only recently begun to accumulate again. If current short- and long-term forecasts for below-average temperatures and above-average precipitation hold, SWE at these four sites should exceed the 30-year median by early January. Effect of this winter’s snowpack on streamflow and reservoir management will depend heavily on how early the snowpack melts, regardless of how much accumulates during the winter. Because of this, we will be monitoring temperatures and snow conditions carefully throughout the middle and late winter.

As decided at the November 21 meeting of the Island Park Drought Management Planning Committee (DMPC), outflow from Island Park Reservoir was increased during the week of November 28. The weather forecast at the time indicated that the first single-digit lows of the season would occur around December 2. Accordingly, outflow was increased on November 30 (Figure 2) from 100 cfs to 150 cfs (Figure 2). A slight upward adjustment was made on December 9 to accommodate an adjustment of the USGS stream stage recorder made on December 7 (see next section). Since December 10, outflow from the dam has averaged slightly above the DMPC’s winter objective of 160 cfs, and total streamflow downstream of the Buffalo River has averaged 354 cfs, compared with last year’s 299 cfs and the long-term average of 531 cfs (Figure 2). The reservoir continues to fill at a steady rate of around 380 ac-ft per day, which will put reservoir content right at average on April 1 (Figure 3), a target set by the DMPC. 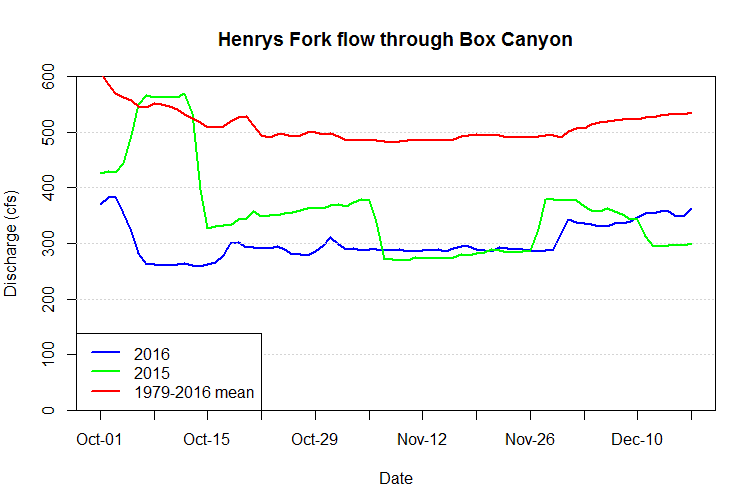 Figure 2. Total streamflow in the Henry’s Fork through Box Canyon (IP Dam outflow + Buffalo River flow) since October 1 2016, compared with observed values in 2015, and the 1979-2016 average. The color scheme matches that in figures 1 and 3.

The November 8 field measurement and rating adjustment produced a 0-shift rating, which remains in place. However, the November 8 field measurement of river stage (depth) deviated slightly from that measured by the continuous pressure recorder. The December 7 field measurement showed no deviation, and the subsequent adjustment to the stage record resulted in a slight adjustment to streamflow (Figure 4). Prior to this adjustment, apparent streamflow was around 160 cfs, compared with an actual measured value of 145 cfs. The slight increase to outflow made on December 9 brought actual outflow in line with the DMPC’s desired winter outflow of 160 cfs and with the outflow indicated by the setting on the USBR outflow gates. 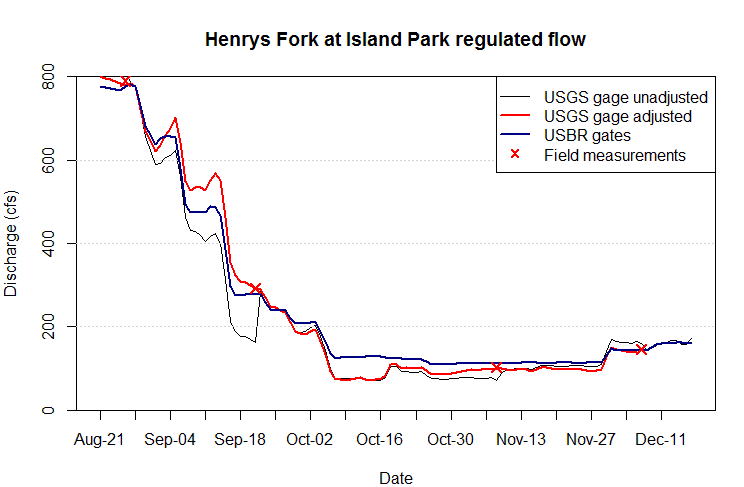