Conditions at Island Park Reservoir as of Friday morning, 10/28/2016

Last week’s precipitation was not as heavy as that in previous weeks, and much of it fell as snow above 7000 feet. However, warm temperatures and rain earlier this week produced a combined rain/snowmelt contribution that raised streamflows on Tuesday. This was readily evident in Fall River (Figure 1). The longer term trend of increasing baseflows continues throughout the basin. Natural basin yield at Island Park continues to climb steadily toward average and away from last year’s record lows (Figure 2).  In the lower watershed, diversions have decreased by about 100 cfs over the past week as canals have shut down for the season. On Monday of this week, diversion was 44 cfs from Fall River, 157 cfs from the Teton River, and 415 cfs from the Henry’s Fork. As a result of increased reach gains and decreased diversion, flow at St. Anthony has been well above the 850 cfs target (Figure 3) established by the Drought Management Planning Committee (DMPC) back in August. I expect streamflow at St. Anthony to remain above 1000 cfs for the remainder of the fall and winter. 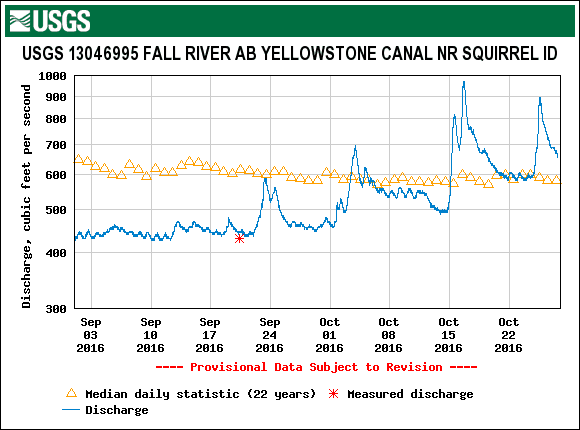 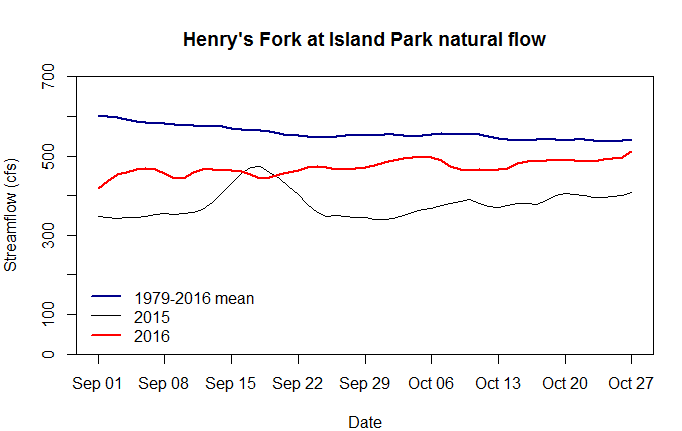 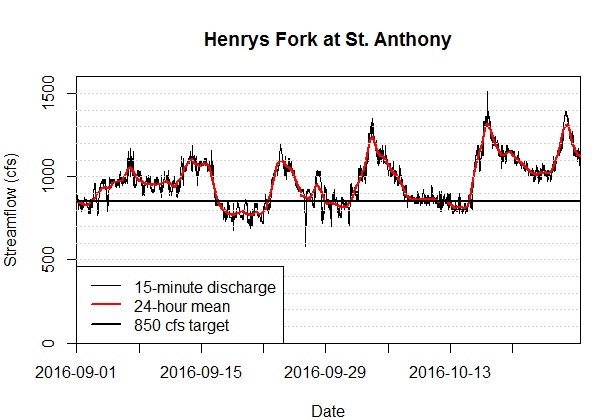 Island Park operations have continued to be implemented as planned. Since storage began on 9/13, aggressive reductions in outflow have more than doubled the amount of water in the reservoir, while generally maintaining flow at St. Anthony at or above 850 cfs. As anticipated, USBR ordered another reduction in outflow last week. However, due to inaccuracies in the automated gate readings at small gate openings, what was intended to be a slight reduction in outflow appeared as a slight increase in flow at the USGS gage (Figure 4). Another adjustment to the gate openings earlier this week dropped apparent outflow. Currently, the USBR gate opening indicates an outflow of 110 cfs. The current USGS rating shift, which was made on September 22 (Figure 5), is -0.22 feet. However, average shift for this time of year is around -0.1 feet. Applying this shift to the current river stage gives an outflow of 96 cfs. So, actual outflow is very likely between 100 and 110 cfs. Given current inflow, and forecast for continued above-average precipitation, this outflow is sufficient to meet the fill objectives set by the DMPC early this fall without dropping outflows to the 60-80 cfs we had anticipated earlier. Rain has kept Buffalo River flows around 190 cfs, giving a total flow of 290-300 cfs in the river downstream of Box Canyon. If the current weather forecast holds, I expect this to be about as low as flow in the river will get for the remainder of the fall and winter. Outflow from Island Park Reservoir will be held close to its current value until cold weather hits. If that holds off for another four weeks, reservoir fill rate is sufficient so that total reservoir contents will equal last year’s in late November. Given that inflow to the reservoir is higher than last year’s, the prospect for mid-winter outflow exceeding last year’s remains good. In addition, Buffalo River flow is slightly higher than it was last year. 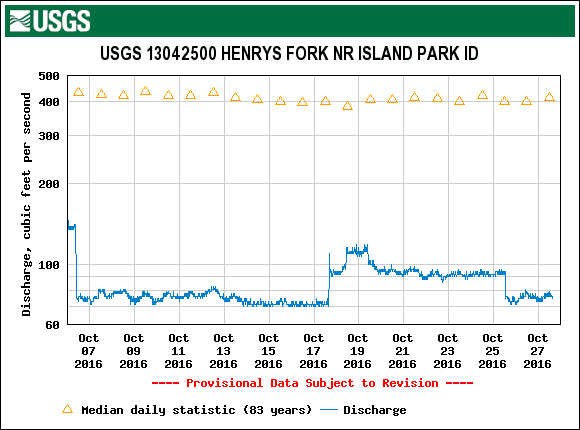 Figure 4. Apparent streamflow as recorded at the USGS gage station at Island Park. 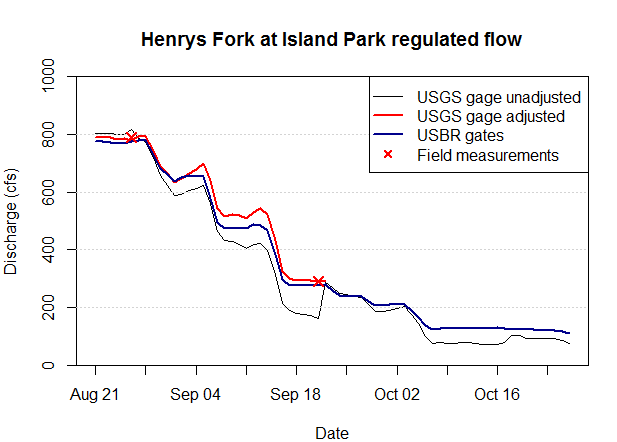 Figure 5. Outflow from Island Park Dam as measured by the USGS gage and USBR gates. The “USGS unadjusted” values are those that appear as current data on the USGS web site in between rating adjustments. The “USGS adjusted” values are those that appear in the data archive after rating adjustments are made. The “USBR gates” values are calculated from the relationship among flow, gate opening, and reservoir elevation.

Looking ahead, USGS will make a field measurement of flow at Island Park during the week of November 7 and adjust the rating curve at that time. We will then know the correct value of outflow, and I will re-calculate inflow using the newly adjusted outflow values. Given the wet weather so far this fall, I will also re-calculate estimated mid-winter inflow to the reservoir, since that is likely to be higher than the value I calculated back in September. All of these updated values will be available before the next DMPC meeting on November 21, at which operations for the remainder of the winter will be discussed.